66th Street is a crosstown street in the New York City borough of Manhattan with portions on the Upper East Side and Upper West Side connected across Central Park via the 66th Street Transverse. West 66th Street is the location of the historical Lincoln Square and the modern Lincoln Center for the Performing Arts at Broadway and Columbus Avenue, as well as the name of the subway station on the IRT Broadway – Seventh Avenue Line which serves the cultural establishment.

The westbound street, contrary to the rule that even numbered streets typically go east, starts on the Upper East Side at York Avenue opposite Rockefeller University. At Fifth Avenue the street enters Central Park, joining eastbound traffic on the 66th Street Transverse across the park. The street continues on the Upper West Side, crosses West End Avenue and ends at Riverside Boulevard in the Trump Place neighborhood. 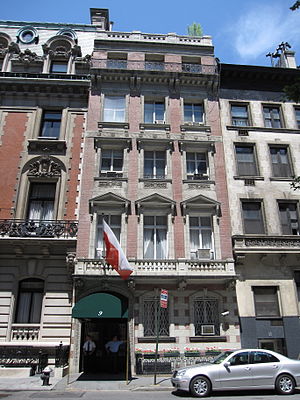 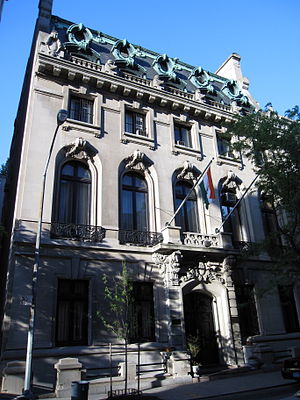 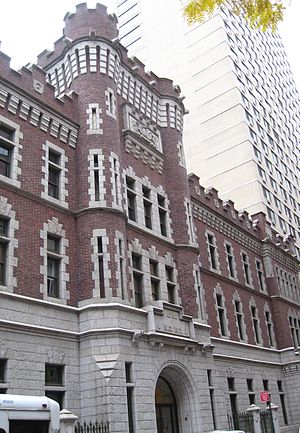 Founder's Hall, located at York Avenue at the eastern foot of East 66th Street, was the first building opened on the campus of Rockefeller University. It was the first major philanthropic foundation created by John D. Rockefeller, Jr. The building was declared a National Historic Landmark in 1974 and is still used as a laboratory.[1]

45 East 66th Street is the site of a red-and-white French Gothic 10-story apartment house completed in 1908 for Charles F. Rodgers as designed by architects Harde & Short.[4][5] The site was added to the National Register of Historic Places in 1980.[6]

West 66th Street between Columbus Avenue and Central Park West is the address for the ABC News Headquarters and was co-named Peter Jennings Way in 2006 in honor of the late news anchor.[7] The famed Manhattan restaurant Tavern on the Green, which operated from 1934 to 2009, also was located off of West 66th Street, at Central Park West.

66th Street is the site of the Manhattan New York Temple of The Church of Jesus Christ of Latter-day Saints. The design for the 38-story structure included retail space at ground level, a church center on lower floors and 325 apartments. In 1972, the plan faced opposition from community organizations and Manhattan Borough President Percy Sutton who protested against the policy on exclusion of blacks from ministerial roles in the church, which was not ended until 1978.[8]

The Lincoln Center for the Performing Arts covers a 16.3-acre (6.6 ha) site located between Columbus Avenue and Amsterdam Avenue, from West 60th to West 66th Street. The project, designed to consolidate many of the city's cultural institutions on a single site was constructed as part of the "Lincoln Square Renewal Project" during Robert Moses' program of urban renewal in the 1960s. The first structure completed and occupied as part of this renewal was the Fordham University School of Law in 1962. The Dauphin Hotel was among the structures demolished as part of the project.

In 1972, the Chinese government purchased the 10-story Lincoln Square Motor Inn at Broadway for nearly $5 million, which was turned into the Chinese Mission to the United Nations, including offices and residences for its delegation in New York. The location made it the only permanent headquarters of any country to be situated on the West Side of Manhattan.[9] In 1998, the Chinese government swapped the site for buildings located on First Avenue and 34th Street, in order to be closer to the UN. The site was converted into a 100-apartment extension of the Phillips Club, an extended stay hotel.[10]

Lincoln Towers is an apartment complex that consists of six buildings with eight addresses on a 20-acre (81,000 m2) campus, bounded on the south by West 66th Street, on the west by Freedom Place, on the north by West 70th Street, and on the east by Amsterdam Avenue.

A 1986 plan by Donald Trump as part of his Television City proposal would have located the world's tallest building — 150 stories and 1,910 feet (580 m) tall — at the corner of West End Avenue and 66th Street, as part of his development of the 100 acre property along the Hudson River between 59th Street and 72nd Street atop the Penn Central rail yards.[11]

Richard Tucker Park, covering 0.05 acres (200 m2) is located at the corner of Broadway and Columbus Avenue.[12][13] The park includes a bust of operatic tenor Richard Tucker by sculptor Milton Hebald dedicated on April 20, 1980, consisting of a larger-than-life size bronze sculpture on a 6-foot-high (1.8 m) granite pedestal.[14][15] The original 1978 proposal for a seven-foot statue of Tucker, depicted in the role of Des Grieux in the opera Manon Lescaut by Giacomo Puccini, had been opposed by a member of Manhattan Community Board 7, who felt that the piece should have been placed in the Metropolitan Opera Hall of Fame, and not on public property.[16]

Notable current and former residents of 66th Street include:

The 66th Street – Lincoln Center station on the IRT Broadway – Seventh Avenue Line is located at the intersection of 66th Street and Broadway. It is served by the 1 2 trains.