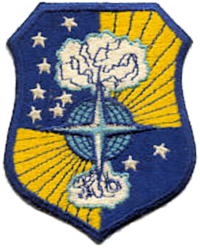 The 72d Air Base Wing (72 ABW) is a United States Air Force unit assigned to the Air Force Materiel Command Oklahoma City Air Logistics Center (OC-ALC). It is stationed at Tinker Air Force Base, Oklahoma. The wing is also the host unit at Tinker.

The diverse, multi-unit, multi-mission wing includes base services and support for the OC-ALC and associate organizations as well as dependents and retirees.

Established in 1941, the 72d is a successor unit to the World War II 72d Reconnaissance Group (Special) combat organization that had earned Antisubmarine and American Theater campaign streamers. The 72d Bombardment Wing, Heavy was a component wing of Strategic Air Command's heavy bomber deterrent force throughout the Cold War. The wing earned two Air Force Outstanding Unit Awards, flying RB-36, B-52 and KC-135 aircraft, before its inactivation on 30 June 1971 in Puerto Rico.

Reassigned to the Panama Canal Zone in January 1942 as part of the defense force of the Panama Canal; assigned to the new Sixth Air Force. The variety of missions assigned to the Group, and the aircraft on which they were carried out, was little short of amazing. Besides many, many coastal, maritime and anti-submarine patrols, the Group's airmen also carried mail routinely, conducted numerous search missions for missing—aircraft and vessels, provided reconnaissance and liaison support for the Army ground forces and coast-artillery units in the region, target-towing, and occasional photo-mapping work within Panama and the surrounding areas.

In February 1942, the Group was tasked to conduct periodic patrols of the Perlas Islands group in the Bay of Panama, as well as anti-submarine reconnaissance missions. These daily patrols, to be launched at irregular intervals by North American 0-47's, were specifically tasked to hunt for sub¬marines, while two other 0-47's were to be held on alert status (at Hangar 1) at Albrook Field for anti-submarine reconnaissance missions that might be handed down from Caribbean Air Force headquarters. Significantly, the results of each of these sub patrols was to be reported in person to the 6th Bomber Command S-2 (Intelligence) by the Flight Commander as soon as it returned.

Besides this vital work, the Group also conducted a courier service with 0-47's between Albrook and Guatemala City three times each week, stopping en route at Managua, Nicaragua and San Jose, Costa Rica, as well as daily courier services to all of the many aerodromes in the immediate Panama area. Additionally, courier service was operated between the remote Aircraft Warning Service sites that had airstrips and to the nearest aerodrome for those that did not.

The Group also detached small elements of Stinson 0-49's to the Interceptor and Bomber Command's to aid them in their own courier and liaison needs starting in January 1942. The Group also maintained one 0-47 at all times on readiness at Howard Field for search missions. Amongst others, this work was carried out on various models of the Douglas B-18, Bell P-39, North American 0-47, Stinson 0-49, Curtiss 0-52, the ubiquitous Piper L-4 and small numbers of Northrop A-17, Curtiss A-l8, Douglas A-20 and Douglas B-23 aircraft. Group strength varied greatly. As of 31 January 1942, it could count 18 0-47A's, three 0-47B's and six 0-49's.

Like other Group-size organizations in the Command, the 72nd Observation Group experi¬enced a dizzying series of contortions and changes, and was finally redesignated as the 72nd Recon¬naissance Group (Special) on 19 July 1943. By this time, however, it had lost the now redesignated 4th Tactical Reconnaissance Squadron and the 39th Observation Squadron to the Antilles Air Command (from 1 June).

Oddly enough, the Group itself apparently never adopted a unit insignia, although some of the subordinate squadrons did). The unit was inactivated on 1 November 1943. 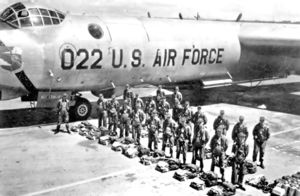 Activated in June 1952 as a Strategic Air Command very long range reconnaissance squadron at Ramey AFB, Puerto Rico, but not operational until it absorbed residual resources of 55th Strategic Reconnaissance Wing in October 1952 when the 55th was reassgigned to the newly activated Forbes AFB, Kansas administratively. Redesignated as 72d Strategic Reconnaissance Wing and received 3 (60th, 73rd and 301st) squadrons of RB-36D/E/F/H Peacemaker bombers. Conducted global strategic reconnaissance 1953–1955, gradually shifting to a bombardment training mission beginning in 1954, being upgraded to B-36J and B-36J(III) Featherweights by 1955. Redesignated 72d Bombardment Wing and received a squadron of KC-135A tankers in 1958.

With the phaseout of the B-36s in 1958, received B-52G Stratofortess intercontinental strategic bombers. Stood nuclear alert between 1959–1971 with the B-52G, was equipped with the AGM-28 Hound Dog cruise missile. Inactivated in 1971 due to a reduction of the number of B-52 wings, as part of a reduction/redirection of funding for combat operations in Vietnam and as ICBM wings took over an increased share of the nuclear alert duty. The wing earned two Air Force Outstanding Unit Awards, flying RB–36 [1952–1958], KC–135 [1958–1971] and B–52 [1959–1971] aircraft, before its inactivation.

In 1972, SAC activated the 72d Strategic Wing, Provisional at Andersen AFB, Guam. Although assigned the same number, this wing is unrelated to the 72d Air Base Wing.[1]

Reactivated as a base host wing under Air Force Materiel Command in 1994.[1] Provides services and support for the Oklahoma City Air Logistics Complex and other organizations at Tinker Air Force Base, Oklahoma.