72nd Street is a local station on the IND Eighth Avenue Line of the New York City Subway. Located at 72nd Street and Central Park West on the Upper West Side, it is served by the C train at all times except nights, when the A train takes over service. The B train provides additional service here on weekdays except nights. 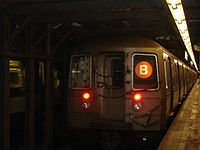 R68 B train at the station 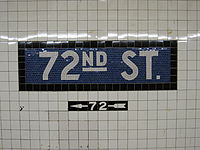 This station's main fare control area is at the north end. Two staircases from the lower level go up to the upper level, where a turnstile bank provides access to and from the station. Outside fare control, there is a token booth and two staircases going up to either western corners of 72nd Street and Central Park West. The northwest staircase, outside the Dakota apartment building, is made of stone.

This station has an unstaffed fare control area at the south end. One staircase from the lower level goes up to the upper level, where two HEET turnstiles lead to a single staircase going up to the southwest corner of 70th Street and Central Park West.

This station formerly had a fare control area at the center going up to 71st Street. Evidence of this includes a fenced off staircase on the lower level and new tiling on the upper level.