The 73d Air Division is an inactive United States Air Force unit. Its last assignment was with Air Defense Command at Tyndall Air Force Base, Florida, where it was inactivated on 1 April 1966. 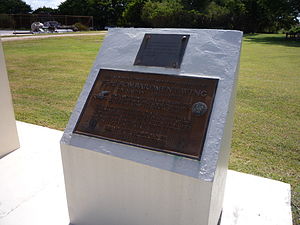 Memorial to the 73rd Bomb Wing near Saipan International Airport. 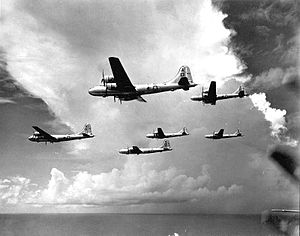 The 73d Bombardment Wing was activated as part of Second Air Force on 17 February 1943.[1] Its original mission was to process personnel assigned to Boeing B-17 Flying Fortress and Consolidated B-24 Liberator Replacement Training Units (RTU) based in the midwest. It was inactivated on 15 October 1943[1] with the drawdown of heavy bomber training.

The wing was reactivated and redesignated as the 73d Bombardment Wing (Very Heavy) on 20 November 1943 at Smoky Hill Army Air Field, Kansas. The new Boeing B-29 Superfortress wing was assigned four newly organized groups, (the 497th, 498th, 499th and 500th Bombardment Groups)[1] which were training in New Mexico and Arizona with B-17 and B-24s, due to a lack of B-29 aircraft. In April 1944, the groups were brought to several airfields in Kansas (Great Bend Army Air Field, Smoky Hill Army Air Field and Walker Army Air Field) where they were equipped with new B-29s manufactured by Boeing at their Wichita, Kansas plant.

By August the wing's groups completed their training and their aircraft were readied for deployment. Originally assigned to Twentieth Air Force's XX Bomber Command in India, the wing was instead assigned to the new XXI Bomber Command in the Pacific Theater. The 73d Wing deployed to newly constructed airfields on Saipan in the Northern Mariana Islands. The 73d Bomb Wing was the first B-29 wing to be assigned to the Marianas, and the first B-29 of the 497th Bomb Group arrived at Isely Field, Saipan on 12 October 1944. The 498th arrived shortly after, with the 499th and 500th Bomb Groups arriving in early November. By 22 November, over 100 B-29s were on Saipan. The XXI Bomber Command was assigned the task of destroying the aircraft industry of Japan in a series of high-altitude, daylight precision attacks

In late October and early November 1944, a series of tactical raids were carried out as training exercises for the crews. From Saipan, the groups of the 73d Bomb Wing flew several bombing missions against Truk to gain combat experience. Aware that there was now a new threat, Japanese aircraft based on Iwo Jima staged a low-level raid on Isely Field on 2 November, damaging several B-29s on the ground. Retaliatory strikes were ordered on Iwo Jima on 5 and 11 November.

In November 1944, the groups of the 73rd began bombing Japan, with only moderate success. Poor weather, the lack of precision radar bombing equipment, and tremendous winds encountered at high altitudes over Japan made accuracy difficult. The initial raids against Japan had taken place at high altitudes in order to stay above anti-aircraft fire and the effective altitude of defending fighters. Tactics were changed and high-altitude, daylight attacks be phased out and replaced by low-altitude, high-intensity incendiary raids at nighttime. The aircraft would attack individually, which meant that no assembly over the base at the start of the mission or along the way would be needed.

Consequently, it turned to devastating low altitude incendiary attacks. The Division continued attacking urban areas until the end of the war in August 1945, its subordinate units conducted raids against strategic objectives, bombing aircraft factories, chemical plants, oil refineries, and other targets in Japan. The wing flew its last combat missions on 14 August when hostilities ended. Afterwards, the wing's B 29s carried relief supplies to Allied prisoner of war camps in Japan and Manchuria.

The 73d and its subordinate units demobilized rapidly after V-J Day, and the wing's four bomb groups were all returned to the United States, with their B-29s either being flown to Clark Field for scrapping, or to storage facilities in Texas or Arizona. The 73d Bomb Wing was reassigned to the United States in December 1945, where it was assigned first to Continental Air Force's Fourth Air Force, then to Strategic Air Command (SAC) on 21 March 1946. However demobilization was in full swing and few SAC units were actually equipped and manned. The 73d wing was inactivated on 31 March.[1]

In 1947, the 73d Bomb Wing was reactivated with the 338th and 351st Bombardment Groups being assigned to it, both reserve B-29 Superfortress organizations. A third group, the 381st Bombardment Group was added in 1948.[1] However SAC was having enough difficulties keeping its front-line active duty B-29 bomb units in the air to maintain even minimal pilot proficiency in the late 1940s.[citation needed] The wing and its bomb groups were all inactivated in 1949.[1]