During World War II the 77th supported ground units in training by flying reconnaissance, artillery adjustment, fighter, and bomber missions, and in the process trained reconnaissance personnel who later served overseas. The 113th Observation Squadron flew antisubmarine patrols over the Gulf of Mexico from March until June 1942 when it was relieved by another squadron (128th). Still another squadron (120th) patrolled the Mexican border from March–July 1942. A detachment of the 77th served in India from February until July 1943. The 77th was inactivated in 1943.

The 77th was redesignated in 1985, though this was a 'paper' change that effectively went no further than an Air Staff filing cabinet. It was then consolidated with the 2852nd Air Base Wing in 1994 to provide services and support for McClellan AFB with its satellite installations and the Sacramento Air Logistics Center with its tenant organizations (the 2852nd had been performing this duty since 1 August 1953) until the base was officially closed in 2001.

The 77 ASW supported the Aeronautical Systems Center. Its units perform a variety of missions

Responsible for the development, testing, acquiring, fielding and sustainment of materiel capabilities for multiple Department of Defense and allied aircraft weapon systems. 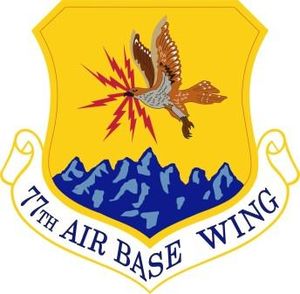 Former emblem as the 77th Air Base Wing