79th Street is a major two-way street in the Upper East Side and Upper West Side of the New York City borough of Manhattan. On the Upper East Side East 79th Street stretches from East End Avenue, passing the New York Public Library, Yorkville Branch, to Fifth Avenue, where the entrance to the 79th Street Transverse is flanked by Children's Gate. The transverse crosses Central Park; its exit at West 81st Street on the Upper West Side is flanked by Hunters' Gate. 79th Street does not exist between Central Park West and Columbus Avenue, due to the superblock of Manhattan Square, largely occupied by the American Museum of Natural History. West of Columbus Avenue, 79th Street continues and terminates in Riverside Park at a traffic circle directly after the exit/entrance ramps for the Henry Hudson Parkway, under which sit the 79th Street Boat Basin and its cafe. 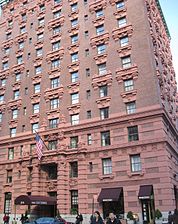 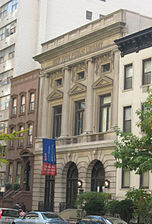 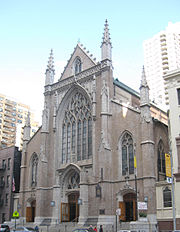 The interchange on the Hudson River and the boat basin was first proposed in 1934 and was constructed by 1937 during the tenure of Robert Moses as Parks Commissioner. It was part of the "79th Street Grade Crossing Elimination Structure" which created a grand architectural multi-level entry and exit from the Henry Hudson Parkway while eliminating a grade crossing of the New York Central Railroad's West Side Line by covering it over and creating the Freedom Tunnel.[4] Designed by Gilmore David Clarke, the Works Projects Administration provided $5.1 million for the project, which also included an underground parking garage, a restaurant, and the marina.[5]

The M79 79th Street crosstown bus route runs from between the 79th Street Boat Basin and East End Avenue at all times.[6]