The 7th arrondissement of Paris is one of the 20 arrondissements (administrative districts) of the capital city of France. It includes some of the major tourist attractions of Paris, such as the Eiffel Tower and the Hôtel des Invalides (Napoléon's resting place), and a concentration of such world-famous museums as the Musée d'Orsay, Musee Rodin, and the Musée du quai Branly.

Situated on the Rive Gauche—the "Left", or Southern, bank of the River Seine—this central arrondissement, which includes the historical aristocratic neighbourhood of Faubourg Saint-Germain, contains a number of French national institutions, among them the French National Assembly and numerous government ministries. It is also home to many foreign diplomatic embassies, some of them occupying outstanding Hôtels particuliers.

The arrondissement is home to the French upper class since the 17th century, when it became the new residence of French highest nobility. The district has been so fashionable within the French aristocracy that the phrase le Faubourg—referring to the ancient name of the current 7th arrondissement—has been used to describe French nobility ever since.[1] France's 2nd richest district in average income and Paris' 1st, this arrondissement is part of Paris Ouest, alongside the 6th, 8th, 16th arrondissements and Neuilly, and is usually considered the most aristocratic district of the area. 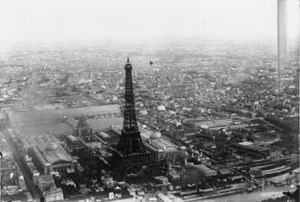 Exposition Universelle in 1889, the entrance arch is known as the Eiffel Tower

During the 17th century, French high nobility started to move from the central Marais, the then-aristocratic district of Paris where nobles used to build their urban mansions[2] (see Hotel de Soubise), to the clearer, less populated and less polluted Faubourg Saint-Germain.

The district became so fashionable within the French aristocracy that the phrase le Faubourg has been used to describe French nobility ever since.[1] The oldest and most prestigious families of the French nobility built outstanding residences in the area, such as the Hôtel Matignon, the Hôtel de Salm, and the Hôtel Biron.

After the Revolution many of these mansions, offering magnificent inner spaces, many receptions rooms and exquisite decoration, were confiscated and turned into national institutions. The French expression "les ors de la Republique" (literally "the golds of the Republic"), referring to the luxurious environment of the national palaces (outstanding official residences and priceless works of art), comes from that time.

During the Restauration, the Faubourg recovered its past glory as the most exclusive high nobility district of Paris and was the political heart of the country, home to the Ultra Party. After the Fall of Charles X, the district lost most of its political influence but remained the center of the French upper class' social life.

During the 19th century, the arrondissement hosted no less than five Universal Exhibitions (1855, 1867, 1878, 1889, 1900) that have immensely impacted its cityscape. The Eiffel Tower and the Orsay building have been built for these Exhibitions (respectively in 1889 and 1900).

The 7th arrondissement attained its peak population in 1926 when it had 110,684 inhabitants. Because it is the location of so many French government bodies, this arrondissement has never been as densely populated as some of the others.[citation needed] In 1999, the population was 56,985, while the arrondissement provided 76,212 jobs. 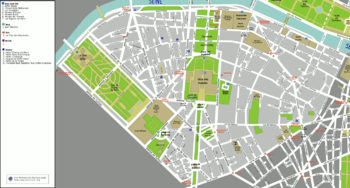 Map of the 7th arrondissement

Air Liquide,[3] Alcatel-Lucent,[4] and Valode & Pistre have their head offices in this arrondissement.[5]

The arrondissement hosted the equestrian events for the 1900 Summer Olympics.[9]