The 82d Operations Group (82 OG) is an inactive United States Air Force unit. It was last assigned to the 82d Training Wing, stationed at Williams Air Force Base, Arizona. It was inactivated on 31 March 1993.

A formation of P-38 Lightnings from the 96th Fighter Squadron, 82nd Fighter Group over Italy, 1944

The history of the 82d Operations Group goes back to 13 January 1942, when the War Department constituted the 82d Pursuit Group (Interceptor).[1]

At the end of April 1942 when it had sufficient personnel and equipment, the 82d moved to Muroc Army Air Field, California, and started formation flying and gunnery and bombing training with Lockheed P-38 Lightning aircraft.[1] In May the War Department redesignated the unit as the 82d Fighter Group (Two Engine). The group left California in September and arrived in Northern Ireland in October where it received additional training.[1] At about the same time, the Allies launched their invasion of French North Africa. By December 1942, Axis forces had repelled the Allied advance, and the long winter campaign had begun. It was at this time that the 82d Fighter Group moved to North Africa to serve with Twelfth Air Force.

Between Christmas and New Year’s Day, the 82d operated from Tafaraoui Airfield, Algeria, to protect two convoys in an anti-submarine patrol. On 1 January 1943, the air echelon moved to Telergma Airport, Algeria, where it was joined by the ground echelon in February 1943.

The 82d soon distinguished itself in dogfights with enemy fighters while escorting bombers over Gabes, Sfax, Tunis, Bizerte, Kairouan, Sardinia, and other points. On 20 March 1943, while escorting North American B-25 Mitchells in a sea search off Cape Bon, a group of P-38s engaged the enemy in an air battle. Even though they were outnumbered by 50 enemy fighters, the 82d emerged with 11 confirmed kills, 2 probables, and 2 damaged, while not losing a single bomber.[citation needed]

In April 1943, the group moved to Tunis to take part in the final phase of the campaign. On 11 April it destroyed 32 Junkers Ju 52s during a fighter sweep against enemy transport planes that were coming from Italy to supply the crumbling Afrika Corps. The group scored hits on 14 April during a bombing mission on a large transport off Cape Zebid and on 8 May executed a bombing attack on the airdrome at Pantelleria.

From July to August 1943, the 82d engaged in the Allied invasion of Sicily while supporting bomber raids against Naples on 17 July and participating in the first raid on Rome on 19 July. It flew 191 combat missions, including 3,335 combat sorties; escorted 2,987 B-25s and 382 B-26s; and engaged in 57 skip and dive bombing attacks. The 82d destroyed 78 enemy planes, had 17 probables, and damaged 56, while losing only 11 P-38s. On 25 August, it conducted a low level strafing attack against enemy aircraft concentrations at Foggia, Italy for which it received a Distinguished Unit Citation(DUC).[1] Just over a week later, the group was awarded a second DUC for its actions in protecting a group of bombers that encountered strong enemy opposition in an attack on marshalling yards near Naples.[1]

During the invasion of Italy by the United States Fifth Army, between 6 and 18 September 1943, the group patrolled the beachhead at Salerno where the pilots flew a round-the-clock schedule, dive-bombing enemy transports, communications, and gun positions. They also flew low altitude reconnaissance missions through the Foggia area reporting crucial enemy activities.

The movement of the 82d to Italy and its assignment to Fifteenth Air Force was part of the airpower buildup to provide fighter protection for the bombers of the Fifteenth Air Force, when they strafed and bombed Axis oil targets. From January 1944 until May 1945, the P-38s of the 82d Fighter Group struck oil centers at Ploiești in Romania, Blechhammer in Poland, Vienna in Austria, Dubova in Czechoslovakia, as well as in Hungary, France, and Yugoslavia. On 10 June 1944, the 82d participated in one of the most daring strikes of the war, bombing the Romano-Americano oil refineries at Ploiești, the most heavily defended target on the continent.[1] For this mission, in which the group braved head-on attacks by enemy interceptors, it was awarded a third DUC.[1]

The 82d engaged in another spectacular episode when it used a single-seat fighter aircraft for the first time to rescue a downed fighter pilot on enemy soil. On 4 August 1944, while on a strafing mission against the airdrome at Focsani, Rumania, the aircraft flown by Capt E. Willsie was hit by ground fire. A veteran of 60 missions, Willsie radioed his position to the formation, crash-landed his plane, demolished it, and then hitched a ride in the lap of 2d Lt Richard T. Andrews, who had landed his P-38 in a pasture to rescue Willsie.

When the war in Europe ended in May 1945, the 82d Fighter Group remained in Italy until it was inactivated on 9 September 1945.[1]

On 12 April 1947, the War Department activated the 82d Fighter Group at Grenier Field in New Hampshire, and assigned it to Strategic Air Command (SAC).[1] 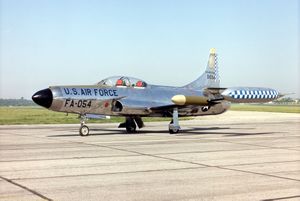 In 1955, the Air Force redesignated the unit as the 82d Fighter Group (Air Defense) and activated it at New Castle Airport, DE,[1] where it assumed the personnel and equipment of the inactivating 525th Air Defense Group[8] as part of Air Defense Command's Project Arrow, which was designed to bring back on the active list the fighter units which had compiled memorable records in the two world wars.[9] It was assigned to Air Defense Command (ADC)'s 4710th Air Defense Wing. Its operational squadrons were the 96th Fighter-Interceptor Squadron, which was transferred from the 525th Air Def Gp,[10] and the 97th FIS, which moved from Wright-Patterson AFB, OH without personnel or equipment and replaced the 332d FIS,[11] since another goal of Project Arrow was to reunited fighter squadrons with their traditional headquarters.[9] Both Squadrons flew F-94C Starfire interceptors.[12] Its primary mission was to provide air defense for the northeastern United States. It also acted as the host base organization for the USAF portion of New Castle Airport and was assigned several support units to fulfil this mission.[13][14] In 1957, it was announced that Air Defense Command would be reducing its forces, and the 82d FIG was inactivated on 8 January 1958.

On 15 December 1991, the group was redesignated as the 82d Operations Group (82d OG) and activated at Williams AFB, AZ as a result of the 82 Flying Training Wing implementing the USAF objective wing organization. The 82d OG was assigned all the flying units of the 82d Flying Training Wing. In 1991 Congress approved the second round of base closures, as identified by the Base Realignment and Closure Commission. On that list was Williams AFB. The base was to cease operation as of 30 September 1993. As a result, the 82d Operations Group was inactivated on 31 March 1993.