The 831st Air Division is an inactive United States Air Force organization. Its last assignment was with Tactical Air Command, assigned to Twelfth Air Force at George Air Force Base, California, where it was inactivated on 31 March 1991.

The division was first activated in October 1957 to command the two North American F-100 Super Sabre wings stationed at George and to provide support for them through its 831st Air Base Group. In 1958, one of its wings converted to the Lockheed F-104 Starfighter, While its second wing continued to fly the "Hun" until moving in 1962, when it was replaced by a Republic F-105 Thunderchief wing.

During and after the Cuban Missile Crisis, the division deployed F-104s to Florida to augment the air defense forces there. As United States forces in Southeast Asia grew in size the division's F-105s deployed to support combat operations, with its entire F-105 wing moving in 1964. That year, a wing of McDonnell F-4 Phantom IIs was organized under the division, although a year later the F-4 wing moved to Thailand, leaving two of its squadrons behind.

After 1966, when the division added the 67th Tactical Reconnaissance Wing at Mountain Home Air Force Base, Idaho, the primary mission of the division's wings was training replacement fighter and reconnaissance aircrews, primarily for Southeast Asia operations. During the Pueblo Crisis of 1968, the division gained control of a federalized Air National Guard reconnaissance wing for eighteen months. The division inactivated in 1971 and its two wings were transferred directly to Twelfth Air Force. 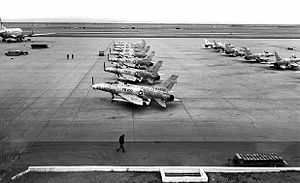 The 831st Air Division was activated at George Air Force Base, California in October 1957 and assigned to Eighteenth Air Force, when the 413th Fighter-Day Wing was activated as Tactical Air Command (TAC)'s second tactical fighter wing there. The 413th joined the 479th Fighter-Day Wing, which had been at George since 1952.[note 1] The division drew its initial cadre from the headquarters of the 479th Wing and Col George Laven Jr., the 479th's commander, became the first commander of the division.[2] The two wings, which flew the North American F-100 Super Sabre, became the division's initial tactical components, while the 831st Air Base Group was assigned to the division to manage support activities at George. Three months after its activation, the division was reassigned to Twelfth Air Force, which moved without personnel or equipment from Germany to replace Eighteenth Air Force.[3] Late in 1958, when Foster Air Force Base, Texas was shutting down operations, the 450th Tactical Fighter Wing was briefly attached to the 831st.[1][4] 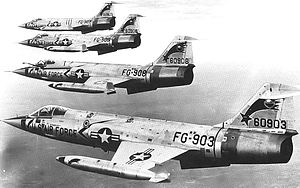 Although the 413th continued to fly the F-100 until it was inactivated, in October 1958 the 479th Wing began to convert to the Vulcan cannon armed Lockheed F-104 Starfighter. [2] A few months later, in March 1959, the 413th Wing and its components were inactivated and its mission, personnel and aircraft transferred to the 31st Tactical Fighter Wing, which moved to George from Turner Air Force Base, Georgia without personnel or equipment, when TAC transferred Turner to Strategic Air Command.[5][6] The 31st Wing moved to Homestead Air Force Base, Florida at the end of May 1962 and was reassigned, ending the Super Sabre era at George.[6] 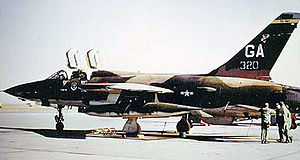 The 831st's time with only a single wing assigned was brief, however, for in July 1962 the 355th Tactical Fighter Wing was organized under the 831st at George and began to equip with the Republic F-105 Thunderchief. The 354th Tactical Fighter Squadron had been activated in April to begin F-105 operations and was transferred from the division to the 355th Wing when the wing was activated. After becoming combat ready with the Thunderchief, the wing began deploying its squadrons to Southeast Asia. The wing itself moved to McConnell Air Force Base, Kansas in December 1964, although most of its fighters had been operating from bases in Thailand and Viet Nam since early 1964.[1][7]

During the Cuban Missile Crisis, the division deployed a squadron of F-104s to Key West Naval Air Station to augment Navy interceptors there.[2] Following the removal of Soviet missiles from Cuba, Air Defense Command (ADC) still maintained a squadron of F-104As at Homestead Air Force Base, Florida, primarily to defend against the possibility of Cuban fighter aircraft striking across the Straits of Florida. However, the F-104A was armed only with AIM-9 Sidewinders, which were not effective against fighters, so the Air Force decided to modify these interceptors by adding cannon armament. From February through April of 1964, eight of the division's cannon-armed F-104s were dispatched to Homestead to stand alert there while ADC's Starfighters were being modified.[8]

In 1964, the Air Force implemented Project Clearwater, which withdrew Convair F-102 Delta Daggers from overseas, primarily to reduce military spending abroad, which was causing negative trade balances.[note 4] Although the returning planes were distributed throughout ADC, three interceptor squadrons and the 8th Tactical Fighter Wing were transferred to George on paper to make up a new McDonnell F-4 Phantom II wing.[9] Because Phantoms were available before the 8th Wing could be transferred from Itazuke Air Base in July, TAC activated the 32d Tactical Fighter Wing to manage the initial work up with F-4s. When the 8th arrived, the 32d's aircraft and personnel were transferred to it along with the former F-102 squadrons, while the 32d inactivated.[1][10]

Division F-104s deployed to the Pacific in 1965 to provide air defense of the Taiwan Straits and the northern provinces of South Viet Nam.[2]

The 8th Wing moved to Ubon Royal Thai Air Force Base in December 1965,[11] briefly leaving the 831st with command of a single wing on a single base. However, in April 1966 the 67th Tactical Reconnaissance Wing at Mountain Home Air Force Base was assigned to the division. Until it was inactivated in 1971, the 831st would command wings at two bases.[1] Not all Phantoms left George with the 8th Wing's departure, for the 479th added two squadrons to train crews on the F-4 Phantom. 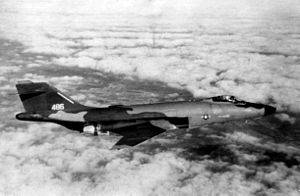 During the Pueblo Crisis, the division's reconnaissance capability was increased when the 123d Tactical Reconnaissance Wing of the Kentucky Air National Guard was called to active duty and moved to Richards-Gebaur Air Force Base, Missouri along with three National Guard reconnaissance squadrons flying the McDonnell RF-101 Voodoo. The 123d continued on active duty until July 1969, when it returned to its home station at Standiford Field.[1]

In addition to participating in deployments with the Starfighter, as soon as it was activated the division's 479th Wing began training foreign air forces on the export versions of the fighter.[2]

When the 8th Wing moved to Ubon at the end of 1965, not all Phantoms left George with the 8th Wing's departure, for the 479th added two squadrons to train crews on the F-4 Phantom. These squadrons were initially assigned to the division and attached to the 479th, but in 1968 they were assigned directly to the wing.[2] Three months after the 479th added the two squadrons it began to operate a formal F-4 Replacement Training Unit, winding down its F-104 operations by July 1967.[2] Shortly after its assignment to the 831st, the 67th Wing at Mountain Home assumed the mission of training RF-4 aircrews.[12]

In 1969 the 479th Wing once again began to train airmen from foreign nations, this time training aircrew and maintenance personnel on the Phantom, continuing the training through 1971 when the division was inactivated and its wings were reassigned directly to Twelfth Air Force.[1][2][12]

The division was reactivated in 1980 when it absorbed the mission, personnel and equipment of Tactical Training, George and was assigned the 35th and 37th Tactical Fighter Wings.[note 8][13] In addition to maintaining a capability to deploy world-wide, it trained fighter and Wild Weasel aircrews. Wild Weasel aircraft were used to destroy enemy-controlled surface-to-air missiles The Wild Weasel aircraft were initially specially modified F-105s. but the division switched to F-4Gs in 1981. Fighter training was performed with F-4Es and included training for German Air Force crews.[1][14]

In 1985, Detachment 1 (Air Warrior) of the division was activated to act as the liaison with the Commander of the National Training Center at Fort Irwin, California. The detachment planned, coordinated and controlled close air support for exercises in the Mojave Desert involving all the Army's combat arms. In July, responsibility for Air Warrior was transferred to the division's 35th Tactical Fighter Wing.[15] Air Warrior exercises continued, with aircraft from various TAC wings staging from George for the exercises.[16][note 9]

In early 1989, Secretary of Defense Frank Carlucci announced that George Air Force Base was being considered for closure.[14] In October, the 37th Wing shut down its operations at George and both fighter and Wild Weasel training were again consolidated under the 35th Wing. However, closure plans were put on hold in August 1990, when the division deployed personnel and aircraft from the 35th Wing to Southwest Asia in support of Desert Shield and later, Desert Storm.[1] The 831st was inactivated in March 1991 and its remaining responsibilities at George were transferred to the 35th Wing until George closed the following year.[1][17]