The 84th Combat Sustainment Group is an inactive United States Air Force (USAF) group last assigned to the 84th Combat Sustainment Wing at Hill Air Force Base, Utah, where it was inactivated in 2010. The group was formed in 1942 as the 84th Bombardment Group, one of the first dive bomber units in the United States Army Air Corps and tested the Vultee Vengeance, proving that aircraft unsuitable as a dive bomber. As an Operational Training Unit, it was the parent for several other bombardment groups, but from 1943 until it was disbanded in 1944, trained replacement aircrews as a Replacement Training Unit designated the 84th Fighter-Bomber Group.

The group was again active as a fighter group from 1949 to 1951 in the Air Force Reserves, with no equipment of its own, but using that of the Regular 52d Fighter-All Weather Group until it was called to active duty in 1951 and its personnel used to man other units.

In 1955, as part of an Air Defense Command program to revive fighter units that had served in World War II, the group became the 84th Fighter Group (Air Defense) and served as the USAF host at Geiger Field and served in an air defense role in the northwestern United States until inactivating in 1963. 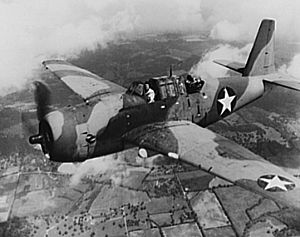 The group was activated in 1942 as the 84th Bombardment Group (Light) at Hunter Field, Georgia, and equipped with Douglas A-24 Banshee dive bombers.[1] The 301st,[2] 302d,[3] 303d,[4] and 304th Bombardment Squadrons[5] were assigned.[1] It received its initial cadre and equipment from the 3d Bombardment Group.[6] The group was assigned the first Army Air Forces (AAF) squadron expressly designated for dive bombing.[6] It operated briefly with Vultee V-72 (A-31 Vengeance) aircraft, but its operations showed this aircraft was unsuitable for dive bombing.[6] The group served as the parent for several other light bombardment groups[note 3] and also trained pilots from Chile.[6] 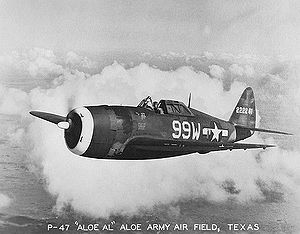 In 1943, the group was redesignated as the 84th Fighter-Bomber Group as were other AAF single engine bombardment groups, and re-equipped with Republic P-47 Thunderbolts.[1] As a result of this redesignation, its squadrons were renumbered as the 496th, 497th, 498th, and 491st Fighter-Bomber Squadrons, respectively. During World War II, the 84th Group served as an Operational Training Unit (OTU) until October 1943.[2][3][4][5] The OTU program involved the use of an oversized parent unit to provide cadres to "satellite groups."[7] During the fall of 1943, group operations dwindled and by the end of September 1943 only five aircraft were assigned to the group.[8]

The group then became a Replacement Training Unit (RTU) and also participated occasionally in demonstrations and maneuvers.[1] RTUs were also oversized units, but with the mission of training individual pilots or aircrews.[7] In performing this mission, the group assumed a split operation, with group headquarters[1] and the 491st[5] and 497th Squadrons[3] moving to Harding Field, Louisiana, while the 496th[2] and 498th Squadrons[4] moved to Hammond Army Air Field, Louisiana in October and November, 1943 and Abilene Army Air Field, Texas in February 1944.[1]

However, the AAF found that standard military units, based on relatively inflexible tables of organization were proving less well adapted to the training mission in the US. Accordingly a more functional system was adopted in which each base was organized into a separate numbered unit.[9] The group was, therefore, disbanded in April 1944[1] and replaced at Harding by the 236th AAF Base Unit (Combat Crew Training School, Fighter)[10] as the Army Air Forces disbanded its units in the US that were not programmed to be transferred overseas. At the same time, the 261st AAF Base Unit (Combat Crew Training School, Fighter) took over the personnel, equipment and mission of the squadrons at Abilene.[11]

The May 1949 Air Force Reserve program called for a new type of unit, the corollary unit, which was a reserve unit integrated with an active duty unit. The plan called for corollary units at 107 locations. It was viewed as the best method to train reservists by mixing them with an existing regular unit to perform duties alongside the regular unit. [12] As part of this program, the group was reconstituted as the 84th Fighter Group, All Weather and activated at Mitchel Air Force Base, New York in the Air Force Reserves to train as a fighter corollary unit of the 52d Fighter Group of the regular Air Force, moving with the 52d to McGuire Air Force Base, New Jersey a few months later.[1] The group was apparently undermanned and thus performed very little training. During its only 2-week summer encampment (12–26 June 1950), the group had only four pilots capable of flying the 52d's North American F-82 Twin Mustangs provided for training the 84th. Like other corollary units, the 84th Group seems to have been poorly manned, and the parent 52d Fighter-All Weather Wing made little use of its corollary units, focusing on its combat mission instead. The 84th Group was ordered to active service on 1 June 1951, inactivated the next day, and its few people became "fillers" for the 52d Wing or, if there was no vacancy in the 52d, for other USAF units.[1][13] 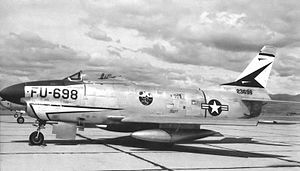 The group was redesignated the 84th Fighter Group (Air Defense) and reactivated in 1955[1] at Geiger Field, WA to replace the 530th Air Defense Group[14] as part of Air Defense Command's Project Arrow, which was designed to bring back on the active list the fighter units which had compiled memorable records in the two world wars.[15] It was assigned the 497th Fighter-Interceptor Squadron (FIS), which moved to Geiger from Portland International Airport and the newly activated 498th FIS. These two squadrons took over the equipment and personnel of the inactivating 440th FIS[16] and 520th FIS.[17] Both squadrons flew radar equipped and HVAR rocket armed North American F-86 Sabres.[18]

The group provided air defense and acted as USAF host organization at Geiger. It was assigned several support organizations to perform its host duties, including communications, base operations, law enforcement, housing and food services.[19][20][21] In February 1957, the 498th FIS upgraded to Convair F-102 Delta Daggers, which were equipped with data link for interception control through the Semi-Automatic Ground Environment system. The 497th FIS, however, continued to fly Sabres until it moved to Europe in June 1958 and was reassigned away from the group.[18] In July 1959, the group again upgraded to Convair F-106 Delta Darts.[18]

On 22 October 1962, before President John F. Kennedy told Americans that missiles were in place in Cuba, the group dispersed a portion of its force, equipped with nuclear tipped missiles to Paine Air Force Base at the start of the Cuban Missile Crisis.[22] These planes returned after the crisis. The group was inactivated shortly thereafter, in July 1963[1] and its combat squadron transferred to McChord Air Force Base, Washington and the 325th Fighter Wing (Air Defense).[citation needed]

The group was reactivated in 2005 as a logistics support group at Hill Air Force Base, Utah as part of Air Force Materiel Command reorganization, which replaced that command's traditional staff agency organizations with wings and groups. It added component squadrons the following year. The 84th Combat Sustainment Group developed, acquired, and sustained nineteen major command, control, communication, and intelligence systems, space ground segments and presidential telecommunications systems. It served the National Command Authority, the Services, combatant commands, federal agencies, and foreign sales customers. It managed systems valued at over $3.5B and provided spare parts for fielded systems worldwide.[23] In 2010 the group was inactivated when AFMC returned to its traditional organization.[24]