Major General Graves, with his staff, 5000 men, and 100 officers, transferred to Siberia in August 1918, and Major General Eli A. Helmick succeeded Graves in command of the division. The overseas movement of the division to Europe began 30 October 1918. The 8th Field Artillery Brigade, 8th Infantry Regiment, 16th Infantry Brigade headquarters, and the 319th Engineer Regiment were the only divisional units to go to France. The 13th and 62nd Infantry Regiments were at sea when recalled after the Armistice, and the 12th Infantry did not leave its pre-embarkation point at Camp Mills, New York, because it was quarantined for Spanish influenza.

The troops who did reach France became the garrison of Brest and assisted in building huge camps for troops about to embark for return to the United States. The 8th Infantry Regiment became part of the American occupation forces in Germany until August 1919 and the remainder returned to the United States in January 1919, after which the division disbanded.

The 8th Division officially demobilized at Camp Lee, Virginia, in September 1919. The division was reconstituted on 24 March 1923, allotted in inactive status to the Third Corps Area for mobilization purposes, and assigned to the III Corps. Camp George G. Meade, Maryland, was its designated mobilization station for reactivation. The 16th Infantry Brigade, 12th and 34th Infantry Regiments, 1st Battalion 16th Field Artillery Regiment, 15th Ordnance Company, and 8th Tank Company (Light) were assigned to the division in June 1923 as active units and formed the base force from which the remainder of the division would be reactivated in the event of war. The commanding general of the brigade was considered the division commander for planning purposes. The 16th Brigade was stationed at Fort Howard, Maryland, from 1922 to 1928; Fort Hunt, Virginia, from 1928 to 1931; in Washington, D.C., from 1931 to 1936; and at Fort Meade from 1936 to the activation of the division.

The division headquarters was organized in April 1926 at Philadelphia, Pennsylvania, as a Regular Army Inactive unit using personnel of the Organized Reserves. The active units of the division conducted annual training with the III and XIII Corps and the 79th, 80th, and 99th Divisions. Summer training camps were usually conducted at Camp Meade.[2]

The 16th Brigade’s 12th and 34th Infantry Regiments, reinforced by the 3d Cavalry and the District of Columbia National Guard’s 260th Coast Artillery, were called out on 28 July 1932 to quell potential trouble from the Bonus Army in Washington, D.C. The 12th Infantry was ordered to clear the United States Capitol and the camps on the Anacostia Flats of the veterans that afternoon.[2] The division was also provisionally organized in 1939 for the First Army Maneuvers at Manassas, Virginia, with the 16th Brigade reinforced by the 66th Infantry (Light Tanks). In preparation for becoming a "triangular" division, the 8th Infantry Division was reactivated on 1 July 1940 at Fort Jackson, South Carolina, without its Reserve units and assigned to the I Corps .[2]

Major General William C. McMahon was relieved shortly after the division arrived in Normandy. His replacement, Major General Donald A. Stroh was temporarily relieved during the Hurtgen fighting; the death of his son, a pilot in the U.S.A.A.F. who was shot down over Brittany, had made a deep psychological impact. After a rest, Stroh went on to command another overseas division.

Following these actions, the 8th turned eastward toward the German border, taking part in the heavy fighting in the Hürtgen Forest in November 1944. The Crozon Peninsula was cleared on 19 September, and the division drove across France to Luxembourg, moved to the Hurtgen Forest, 20 November, cleared Hurtgen on the 28th and Brandenberg, 3 December, and pushed on to the Roer.[4] That river was crossed on 23 February 1945, Duren taken on the 25th and the Erft Canal crossed on the 28th. The 8th reached the Rhine near Rodenkirchen, 7 March, and maintained positions along the river near Koln.[5] In early March 1945, the 8th had advanced into the Rhineland. It fought its way into the Ruhr region the following month.

On 6 April the division attacked northwest to aid in the destruction of enemy forces in the Ruhr Pocket, and by the 17th had completed its mission. After security duty, the division, under operational control of the British Second Army, drove across the Elbe, 1 May, and penetrated to Schwerin when the war in Europe ended.

On 2 May 1945, as it advanced into northern Germany, the 8th Infantry Division encountered the Neuengamme concentration camp Wöbbelin subcamp, near the city of Ludwigslust.[4] The SS had established Wöbbelin in early February 1945 to house concentration camp prisoners who had been evacuated from other Nazi camps to prevent their liberation by the Allies. Wöbbelin held some 5,000 inmates, many of whom suffered from starvation and disease. The sanitary conditions at the camp when the 8th Infantry Division and the 82nd Airborne Division arrived were deplorable. There was little food or water, and some prisoners had resorted to cannibalism. In the first week after liberation, more than 200 inmates died. In the aftermath, the United States Army ordered the townspeople in Ludwigslust to visit the camp and bury the dead.[4]

The 8th Infantry Division was recognized as a liberating unit by the U.S. Army's Center of Military History and the United States Holocaust Memorial Museum in 1988.[4]

Assignments in the European Theater of Operations

Three soldiers of the 8th Division were awarded the Medal of Honor in World War II.

From the late 1950s until the early 1960s, the 8th Infantry Division was organized as a partially Airborne Pentomic division, with two of its five battle groups (the 1st Airborne Battle Group, 504th Infantry,[8] and 1st Airborne Battle Group, 505th Infantry)[9] on jump status. In 1963 the division was reorganized into a brigade structure with the 1st Brigade on jump status, and 1-504th was reorganized and reflagged as the 1st Battalion (Abn), 509th Infantry[10] and 1-505th as the 2d Battalion (Abn), 509th Infantry. Supporting units throughout the division (for example, one field artillery battalion, one company of the engineer battalion, one platoon of the MP company, etc.) were also on jump status. The 8th Infantry Division operated its own jump school at Wiesbaden Air Base to support its 1st Brigade as well as other elements of the United States Army, Europe.[11] In 1973 the 1st Brigade's jump status was terminated, the two Airborne infantry battalions were reflagged as the 2d Battalion, 28th Infantry and the 2d Battalion, 87th Infantry, and the colors of 1-509th were transferred to Vicenza, Italy, to establish a separate Airborne battalion combat team.

The 4th Battalion, 34th Armor, stationed at Lee Barracks in Mainz-Gonsenheim, and the 12th Engineer Battalion stationed at Anderson Barracks, were attached to the 3d Armored Division during Desert Shield/Desert Storm. Elements of the 8th ID (M) were deployed to Southern Turkey in support of Operation Provide Comfort in the spring of 1991. Upon completion of that tour they were authorized to wear the 8th ID shoulder sleeve insignia as former wartime service patch on the right shoulder of their uniforms. 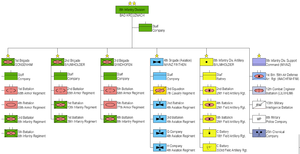 The 8th Infantry Division was known as the "Pathfinder" division during World War I, and both it and the "Golden Arrow" division during World War II. Both nicknames originated from the division's insignia, which includes a gold arrow to represent the 19th-century explorer of California, John Fremont. The division was formed at Camp Fremont, California in 1918. It was later known to many of its post World War II soldiers as Eight Up (Ate Up: a military term meaning out of order, screwed up) and "The Crazy Eight," after the card game.