The 90th Infantry Division ("Tough 'Ombres"[1]) was a unit of the United States Army that served in World War I and World War II. Its lineage is carried on by the 90th Sustainment Brigade. 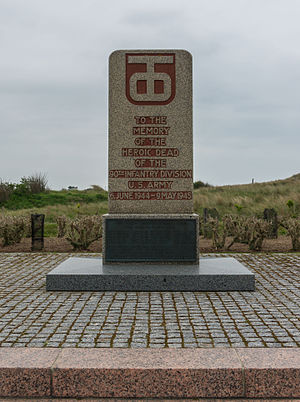 The monument to the 90th US Infantry Division at Utah Beach, Manche, Normandy, France. 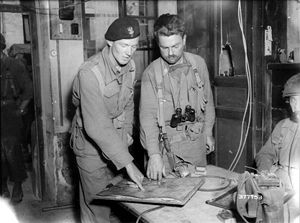 First elements of the division saw action on D-Day, 6 June, on Utah Beach, Normandy, the remainder entering combat 10 June, cutting across the Merderet River to take Pont l'Abbe in heavy fighting. After defensive action along the river Douve, the division attacked to clear the Foret de Mont-Castre (Hill 122), clearing it by 11 July, in spite of fierce resistance. An attack on the island of Saint-Germain-sur-Sèves failing, 23 July, the 90th bypassed it and took Périers, 27 July.

On 12 August, the division drove across the Sarthe River, north and east of Le Mans, and took part in the closing of the Falaise Gap, by reaching 1st Polish Armored Division in Chambois, 19 August.

It then raced across France, through Verdun, 6 September, to participate in the siege of Metz, 14 September-19 November, capturing Maizières-lès-Metz, 30 October, and crossing the Moselle River at Kœnigsmacker, 9 November. Elements of the 90th Infantry assaulted and captured the German-held Fort de Koenigsmacker 9–12 November.

On 6 December 1944, the division pushed across the Saar River and established a bridgehead north of Saarlautern (present-day Saarlouis), 6–18 December, but with the outbreak of the Gerd von Rundstedt's (Army Group A) drive, the Battle of the Bulge, withdrew to the west bank on 19 December, and went on the defensive until 5 January 1945, when it shifted to the scene of the Ardennes struggle, having been relieved along the Saar River by the 94th Infantry Division. It drove across the Our River, near Oberhausen, 29 January, to establish and expand a bridgehead. In February, the division smashed through Siegfried Line fortifications to the Prüm River.

After a short rest, the 90th continued across the Moselle River to take Mainz, 22 March, and crossed the rivers Rhine, the Main, and the Werra in rapid succession. Pursuit continued to the Czech border, 18 April 1945, and into the Sudetes mountain range. The division was en route to Prague when they came upon the remaining 1500 emaciated prisoners left behind by the SS at Flossenbürg concentration camp. Today, a memorial wall at the former camp honors the 90th as the liberators of Flossenbürg concentration camp.[2] A week later, word came that the war in Europe ended on 8 May 1945. On that same day, Erich Hartmann, the highest-scoring fighter ace in history, along with a sqaudron of the elite Jagdgeschwader 52 fighter wing (the highest-scoring fighter wing in history), surrendered to the 90th.