From Infogalactic: the planetary knowledge core
(Redirected from 91:an (comic book))
Jump to: navigation, search 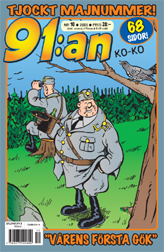 Although it is read by some younger children it is mainly aimed at teenagers and adults, with 72% of its current readership aged 20 or over. Total readership is approximately 278,000.

The principal cartoon strip is 91:an, whose principal character, Mandel Karlsson, is a young man (aged perhaps 20 or 21) doing conscribed military service in the Swedish Army. His number is "91", thus he is widely known in Sweden as "91:an Karlsson", although in the modern comic strip itself he is almost always referred to as Mandel (Eng: Almond, an extremely unusual first name), or simply as "91:an".

From the very first edition two other strips have featured in every edition: Åsa-Nisse (which has also had its own comic book, periodically, since 1960) and Kronblom.

Other strips which have had runs in the comic are:

One of the key features of the comic is a remarkable readers' letters section, covering 2 pages, called 91:an mot väggen or Ställ 91:an mot väggen (Eng: Put No. 91 up against the wall). Here, one of the longest serving writers, Leif Bergendorff, replies to letters in an open and informative manner.

Note: all linked pages except the U.S. Subscription link are in the Swedish language.