During World War II, the group's predecessor unit, the 92d Bombardment Group was the first VIII Bomber Command B-17 Flying Fortress heavy bombardment groups to carry out strategic bombardment operations against targets in Occupied Europe and Nazi Germany from RAF Bovingdon, England in September 1942. The 92d Bomb Group was the first Bomb group to make a non-stop Atlantic flight to United Kingdom. Its 327th BS was the only unit in AAF to be equipped with YB-40 for Combat. It tested the secret Disney rocket-assisted-bomb experimental mission early in 1945, and led the Eighth Air Force on its last combat mission of the war.

In the postwar era, the 92d Bombardment Group was one of the first USAAF units assigned to the Strategic Air Command on 4 August 1946, prior to the establishment of the United States Air Force. The group being activated as a redesignation of the 448th Bombardment Group due to the Air Force's policy of retaining only low-numbered groups on active duty after the war.

It was deployed to Far East Air Force in 1950 and its B-29 Superfortress flew combat missions over North Korea early in the Korean War. The group was inactivated in 1952 when the parent wing adopted the Tri-Deputate organization and assigned all of the groups squadrons directly to the wing.

Reactivated as the 92d Operations Group in 1991 when the 92d Wing adopted the USAF Objective organization plan.

The mission of the 92d Operations Group is to provide the best air mobility for America through reliable air refueling and airlift worldwide. Dubbed as the new "tanker hub of the Northwest," the group is capable of maintaining an air bridge across the nation and the world in support of US and allied forces.

The flying components of the 92 OG are equipped with the KC-135R Stratotankers. A black seahawk adorns the tails of the unit's aircraft.

Emblem of the 92d Bombardment Group 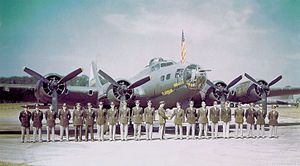 Senior Pilots pose in front of a 325th Bomb Squadron Boeing B-17F-105-BO, AAF Serial No. 42-30455, after a successful mission to Hülser Berg Germany in late June 1943. Equipped with radar, this aircraft flew several missions as the lead aircraft of the group. Unfortunately, this aircraft went down in the North Sea 16 November 1943 while returning from Norway after being transferred to the 390th BG/569th BS at RAF Framlingham in Suffolk. 10 crew MIA. MACR 1400 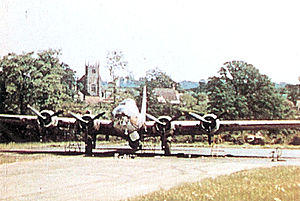 Unidentified 92d Bomb Group B-17F at Alconbury Airfield, summer 1943. In the background is a familiar sight to anyone who ever served at Alconbury, the village of Little Stukeley

Lockheed/Vega B-17G-10-VE Flying Fortress Serial 42-39958 of the 92d Bomb Group. This aircraft suffered severe damage during a mission to Hamburg Germany on 4 November 1944 attacking the Harburg oil complex. It was written off after it landed safely.

The unit was activated on 1 March 1942 at Barkesdale Field FL. After training at Sarasota AB May–July 1942, the Air Echelon left for Westover AB, Massachusetts and moved to Dow AB, Maine on 29 June 1942. In August, the squadrons flew to Newfoundland and then direct across the Atlantic to Prestwick. They were the first unit to make a non-stop Atlantic crossing from Gander, Newfoundland, to Prestwick, Scotland. The Ground echelon sailed on USS West Point on 6 August 1942, and docked at Liverpool on 18 August 1942. This was the same day the first aircraft of the 326th Bomb squadron arrived in Bovingdon. The last squadron - the 407th - arrived on 28 August 1942.

Assigned to VIII Bomber Command and assigned to RAF Bovingdon and was assigned to the 4th Combat Wing, at RAF Thurleigh. The 92d flew a few two combat missions in September and October 1942, then was withdrawn from combat and its B-17F bombers exchanged for the older B-17E bombers being flown by the 97th Bomb Group.

The 92d then acted as an operational training unit supplying combat crews to combat groups in the UK. However, in early 1943, the diversion to Operation Torch of heavy bomber groups originally planned for the Eighth Air Force led to a decision to return the 92d to combat operations, although its 326th Bomb Squadron was left to continue the OTU mission. The 325th squadron was used to provide a cadre for H2S radar training, and its 327th squadron acquired a special mission.

In January 1943, the 92d was transferred to RAF Alconbury where it was reformed as an operational combat group. At Alconbury the group took the name "Fame's Favorite Few", and its B-17s acquired the tail code of "Triangle B". The Group resumed operational flying missions on 1 May 1943. From Alconbury, the 92d engaged in bombing strategic targets, including shipyards at Kiel, ball-bearing plants at Schweinfurt, submarine installations at Wilhelmshaven, a tire plant at Hanover, airfields near Paris, an aircraft factory at Nantes, and a magnesium mine and reducing plant in Norway.

At Alconbury, the group's 327th Bombardment Squadron became the only squadron to be equipped with the experimental YB-40 Fortress gunship from May through August 1943. The YB-40 was developed to test the escort bomber concept. Because there were no fighters capable of escorting bomber formations on deep strike missions early in World War II, the USAAF tested heavily armed bombers to act as escorts and protect the bomb-carrying aircraft from enemy fighters. Twelve of the 22 B-17F bombers modified to the YB-40 configuration were dispatched to Alconbury for testing and evaluation.

The YB-40 project failed because the aircraft were able to effectively defend only themselves, were too slow because of excess weight and drag to keep up with bomber formations returning from missions, and had basic flight characteristics altered by the added drag and centre of gravity changes resulting from the changes. After 14 operational missions, the 11 surviving YB-40's were taken out of combat service and returned to the United States.

On 15 September 1943, the 92d BG was moved to RAF Podington (Station 109), near Wellingborough in Bedfordshire when the decision was made to take Alconbury off operational bombing missions and change the airfield's mission to pathfinder and radar-guided bombing with the 482d and 801st Bomb Groups.

From Podington, the group flew almost 300 operational missions over Nazi-Occupied Europe. Missions were flown to Wilhelmshaven, a tire plant at Hanover, airfields near Paris, an aircraft factory at Nantes, and a magnesium mine and reducing plant in Norway.

Although handicapped by weather conditions, enemy fire, and insufficient fighter protection, the 92d bombed aircraft factories in central Germany on 11 January 1944 and received a Distinguished Unit Citation for the mission.

The group took part in the intensive campaign of heavy bombers against the German aircraft industry during Big Week, 20–25 February 1944. After that, it attacked V-weapon sites in France; airfields in France, Germany, and the Low Countries, and industrial targets in France, Germany, and Belgium, making concentrated strikes on oil and transportation facilities after October 1944.

In addition to strategic missions, the 92d performed some interdictory and support operations. Assisted the Normandy invasion in June 1944 by hitting gun emplacements, junctions, and marshalling yards in the beachhead area. Supported ground forces at Saint-Lô during the breakthrough in July 1944. Bombed gun positions and bridges to aid the airborne assault on the Netherlands in September 1944. Participated in the Battle of the Bulge, December 1944 – January 1945, by attacking bridges and marshaling yards in and near the battle area. Bombed airfields near the landing zone to cover the airborne assault across the Rhine in March 1945.

After V-E Day, was assigned to Green Project which was the movement of troops from Marseilles staging area at Casablanca. Moved to Istres, France, between May and early July 1945. First personnel arrived on the third of June 1945. The 327th Bomb Squadron detached to Port Lyautey, French Morocco. Between 15 June 1945 and 9 September 1945 they moved 19,935 troops while 5,672 Frenchmen returned to France. Displaced Greek Munich to Athens. The group run down during the winter of 1945 and 1946 were absorbed into the 306 BG on 28 February 1946. 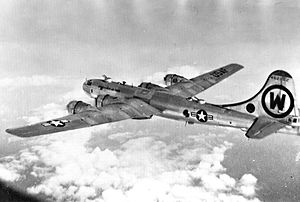 Reactivated later in 1946 for training in B-29 Superfortress bombers at Fort Worth Army Air Field. In October 1946 the 92 BG moved again, this time to Smokey Hill Army Air Field, Kansas where they remained until June 1947. The groups final move was to Spokane Army Air Field (now Fairchild Air Force Base) near Spokane, Washington. Elements deployed to alert commitments in the United Kingdom in early 1949.

The 92d was one of two Strategic Air Command (SAC) groups selected to deploy to the Pacific after SAC was directed to reinforce the 19th Bombardment Wing of Far East Air Forces. The 92d was selected because removing it from SAC control would have a minimum impact on the SAC mission because its planes were not yet equipped for the delivery of nuclear weapons and would not impact SAC's task of building a credible deterrent to the Soviet Union.[1] During the early days of the Korean War, 92d BG B-29s arrived from the United States at Yokota Air Base, outside of Tachikawa, Japan, with deployment completed on 13 July. By the time the entire group completed its deployment, its aircraft had already flown a leaflet mission to Seoul and a combat mission against the Wonsan marshalling yards in North Korea. Under control of the FEAF Bomber Command (Provisional) until 20 October, the 92d bombed factories, refineries, iron works, hydroelectric plants, airfields, bridges, tunnels, troop concentrations, barracks, marshalling yards, road junctions, rail lines, supply dumps, docks, vehicles and other strategic and interdiction targets. The 92d BG returned to Spokane AFB, Washington in late October and November 1950. Five planes — 44-61617, 44-61923, 44¬62084, 44-62211 and one serial number unknown — were lost during the deployment.

In July 1951 the group converted to the B-36 Peacemaker bomber. In June 1952 the unit was inactivated when the Air Force reorganized its wings into the tri-deputate system.

On 29 August 1991, the 92d Bombardment Wing was redesignated as the 92d Wing under the "Objective Wing" concept adopted by the Air Force as the lines between tactical and strategic forces blurred. The flying components of the wing were reassigned to the newly established 92d Operations Group.

As part of their new mission, the 92 OG also gained two squadrons of KC-135 tankers. The 92 OG ended B-52 alert duties in September 1992, and from February 1993, performed air sampling missions for the Department of Energy with modified B-52Hs. The group's mission changed to solely air refueling in 1994. During 1993 the group also had a UH-1 helicopter squadron, but this unit was gone by 1994 as were the B-52s.

The 92 OG regularly deployed elements during the late 1990s to support overseas tanker task forces in support of humanitarian, peacekeeping, and contingency operations in the Balkans and Southwest Asia. Today the 92d Operations Group is only responsible for KC-135 operations.

In 1999 the Group became the 92d Air Expeditionary Group at Morón Air Base in Spain, tasked with providing fuel to Operation Allied Force. In addition to serving as the HQ 92 AEG (serving units in France, Crete, Sicily and Spain), Morón hosted 37 tankers (KC-135 and KC-10) and 800 personnel.

The 92 AEG became the largest Tanker Wing since the Vietnam War and held the distinction of being the largest tanker base during the Kosovo war. Aircraft of the 92 OG took part in Operation Enduring Freedom (OEF), and Operation Iraqi Freedom (OIF) in the 2000s (decade).

Today, elements of the 92d Operations Group are routinely deployed around the world as part of the Global War on Terrorism.