Emblem of the 93d Bombardment Wing

In 1948, the entire wing deployed to Okinawa, making it the first SAC bomb wing to deploy to the Far East in full strength. The B-36 Peacemaker entered SAC's inventory in 1948 but was not assigned to the 93d. The huge plane dwarfed the earlier B-29 (and also B-50) bombers. As only the B-36 groups were "Heavy", the 93d, was redesignated the 93d Bombardment Wing (Medium)

In 1949, the wing received its first B-50 Superfortress aircraft, an improved version of the B-29. It struck up operations overseas with the deployment of its tactical force to RAF Mildenhall, England (July 1950 – January 1951) in response to communist aggression on the Korean peninsula. Meanwhile, the 93d Air Refueling Squadron was activated on 1 March 1949, equipped with the KB-29P (a B-29 bomber modified with a refueling boom).

The 93d continued to move forward throughout the 1950s, replacing the propeller-driven B-50s with new B-47E Stratojet swept-wing medium bombers in 1954, capable of flying at high subsonic speeds and primarily designed for penetrating the airspace of the Soviet Union.

Flew numerous training missions and participated in various SAC exercises and deployments with the Stratojet until the wing received SAC’s first B-52s. The 93d retained some of its B-47s until 1956 for crew training purposes. It was one of the few wings to have operated both jet bombers simultaneously. 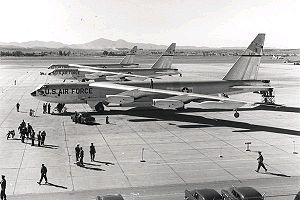 Three B-52Bs of the 93d Bomb Wing prepare to depart Castle Air Force Base, Calif., for their record-setting round-the-world flight in 1957 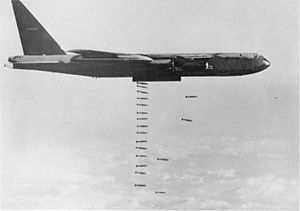 SAC assigned its first Boeing B-52 Stratofortress to the wing in June 1955.[2][a 1] The wing was redesignated the 93d Bombardment Wing, Heavy on 1 February 1955 in anticipation of the arrival of the B-52.[1] Its B-52Bs were initially used for crew training. The wing was declared combat ready with the B-52 on 12 March 1956, but became nonoperational two months later when a second squadron began to equip with Stratofortresses. It became operational again on 26 June 1957, when its mission became primarily crew training.[2]

On 24 and 25 November 1956, in an operation known as Quick Kick, four B-52Bs of the 93d joined four B-52Cs of the 42d Bombardment Wing for a nonstop flight around the perimeter of North America. Four in-flight refuelings by Boeing KC-97 Stratotankers were required for the 13,500-nautical-mile (25,000 km) journey.[a 2] Less than two months later, in Operation Power Flight, three 93d B-52Bs flew the first non-stop jet around-the-world flight. Taking off on 16 January 1957,[3] they flew via Newfoundland, Casablanca, Dhahran, Ceylon, the Malay Peninsula, Manila and Guam. Upon landing at March Air Force Base, California on 18 January, General Curtis LeMay, SAC Commander, greeted the crews and presented them with the Distinguished Flying Cross. Operation Power Flight was recognized by the National Aeronautical Association as the outstanding flight of 1957 and it awarded the wing the Mackay Trophy.[3]

As SAC’s alert commitment grew during the late 1950s and early 1960s, the 93d provided a strong and capable force for deterrence. Cold War tensions reached new heights during this time period with events such as the Cuban Missile Crisis in 1962.

Throughout the height of the Vietnam War (1968–1974) the wing operated a special B-52 aircrew replacement training unit to support SAC’s B-52 operations in Southeast Asia.

The 93d recorded another first on 10 June 1982 when the first all female KC-135 crew, “Fair Force One,” flew a five-hour training sortie.

Finally in August 1990 the 93d found itself back at war. At home its support units operated an aerial port of embarkation for personnel and equipment deploying to Southwest Asia (SWA). Overseas its KC-135s refueled planes and ferried personnel and equipment to the region, while its B-52s bombed the Iraqi Republican Guard and targeted Iraqi infrastructure throughout January and February 1991.

When the first B-52s began to be assigned to SAC in 1955, Air Training Command had no school for the aircraft. Because of the need to get the bomber operational as soon as possible, SAC established the 4017th Combat Crew Training Squadron to conduct training on the Stratofortress. As the B-52 force expanded, the mission became too great for a single squadron and the wing's three bombardment squadrons took over the flight training program, while the 4017th conducted ground training and overall administration of the training program.[2] As SAC's involvement in the Vietnam War increased, on 15 April 1968, SAC established a replacement training unit within the 4017th. This unit was established to qualify aircrews flying B-52E, B-52F, B-52G and B-52H bombers to fly the B-52D, which (with its Big Belly modification) was SAC's conventional bomber in Southeast Asia. After two weeks of training, the crews augmented the cadre unit in the Pacific. This training enabled SAC to meet its commitments, while at the same time spreading the burden of deployment more equitably among its entire force of B-52 crews.[5] 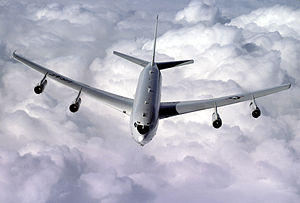 An E-8C Joint Surveillance Target Attack Radar System from the 93d Air Control Wing flies a refueling mission over the skies of Georgia.

The Air Force underwent major restructuring after the Cold War ended. On 1 September 1991, the 93d lost its air refueling commitment, (924th ARS), and its KC-135 aircrew training missions (329th CCTS). It also implemented the objective wing organization and was redesignated as the 93d Wing.

On 1 June 1992 the 93d was relieved from assignment to SAC and was reassigned to the newly formed Air Combat Command (ACC). It was then redesignated as the 93d Bomb Wing.

This was not the end of the 93d however. Just four months later it was redesignated as the 93d Air Control Wing (93 ACW) and was reactivated at Robins AFB, Georgia on 29 January 1996. It was to be equipped with the E-8C Joint Surveillance Target Attack Radar System (Joint STARS) and it accepted its first production aircraft on 11 June 1996.

From late October through December 1996, the wing deployed to Rhein-Main Air Base, Germany for operations JOINT ENDEAVOR and JOINT GUARD in Bosnia and Herzegovina. It provided “top cover” for United Nations (UN) peacekeeping forces and monitored the warring factions for violations of UN resolutions.

As tensions mounted between Iraq and the UN in 1998, the 93d deployed an element to SWA to monitor Iraqi military movements. In February 1999 it deployed an aircraft to Europe to support NATO's monitoring of tensions between Serbia and Kosovo. The new wing saw its first combat during operations in Kosovo, playing a major role in the destruction of enemy targets and compiling over 1,000 combat hours.

In November 2001 through April 2002 the wing deployed in response to the 11 September terrorist attacks against the United States in support of Operation ENDURING FREEDOM.

The 93 ACW inactivated at Robins AFB on 30 September 2002. Its mission and resources became a part of Air Force history on that day as the Georgia Air National Guard’s 116th Bomb Wing (now redesignated the 116th Air Control Wing (116th ACW)) assumed command responsibility for the Joint STARS mission and the first ever “blended wing,” combining active-duty and Air National Guard personnel, aircraft, and facilities under one commander under the newly activated 116th ACW.