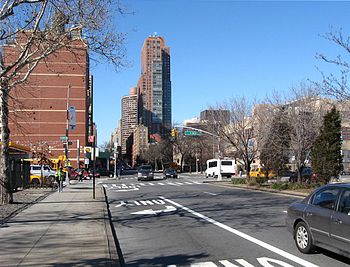 96th Street is a major two-way street in the Upper East Side and Upper West Side sections of the New York City borough of Manhattan, running from the East River at the FDR Drive to the Henry Hudson Parkway at the Hudson River. It is one of the 15 hundred-foot-wide (30 m) crosstown streets mapped out in the Commissioner's Plan of 1811 that established the numbered street grid in Manhattan.[1]

96th Street is the northern boundary of the New York City steam system, which pumps 30 billion pounds of steam into 100,000 buildings south of the street, the largest such system in the world.[2]

From the FDR Drive to First Avenue, 96th Street is the northern border of Zone A, a flood evacuation zone.[3] When Hurricane Sandy hit New York City in 2012, residents on neighboring blocks found out they, too, were in a flood zone, and the city revised its zone borders outward. Residents of the public housing projects as well as high rise apartments in the zone were left without power, although it was restored to most of the area after a day or two.

96th Street rises after Second Avenue, and climbs from Third Avenue to Lexington Avenue – called "Carnegie Hill" – before leveling off at Central Park. The street is the traditional dividing line between Yorkville and the Upper East Side to the south and Spanish Harlem or East Harlem to the north.[4][5]

East 96th Street, particularly near Second and Third Avenues, underwent significant gentrification in the late 1980s. By 2005, a wave of speculation for Harlem real estate pushed a corridor of luxury condos and coops up First Avenue from 96th Atreet as well. The construction of a subway along Second Avenue, has disrupted lives and businesses along 96th Street, but its planned opening in 2016 is expected to further increase residential and commercial development in East Harlem, as well as increasing housing value in Yorkville, where the long walk to the subway along Lexington Avenue made commuting more difficult.

The Islamic Cultural Center of New York opened at Third Avenue and East 96th Street in 1991. Like all mosques, it is oriented toward Mecca, which required a slight shift in orientation from the neighboring buildings. 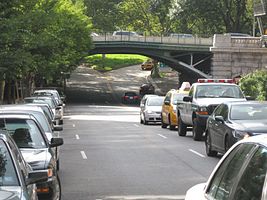 96th Street runs under Riverside Drive near its western end

On the West Side, 96th Street runs through a natural valley passing under Riverside Drive and leading down to the former Stryker's Bay. It is regarded as the southern border of the nearby Manhattan Valley area.[6][7]

Broadway at West 96th Street was home to two ornate theaters – the Riviera and Japanese Gardens – each designed in the early 20th century, and both gone by 1976.[8]

In the mid 1980s, parts of West 96th Street began to convert from rental units to cooperative housing. At the time, crime remained a problem. As late as the early 1990s, drug dealing was rampant on 96th Street between Broadway and Amsterdam Avenue, and Larry Hogue, a homeless crack addict known as the "Wild Man of 96th Street" terrorized the street for several years until being forced into treatment and extended state custody.[9] In 2009, Hogue escaped from custody and returned briefly to West 96th Street before being found and returned to treatment.[10] The decision by the city to continue locating homeless and frequently drug addicted residents in large former Single Room Occupancy hotels (SROs) within a several block radius of West 96th Street and Broadway continues to be controversial.[11] Homelessness continues to be visible in the area.

The rapid development of Columbus Avenue from 96th to 100th Street around 2009 resulted in a burgeoning concentration of large, national chain stores. 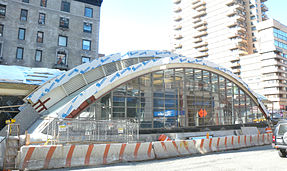 The north entrance to 96th Street station at Broadway

Subway service is at these stations:

The M96 bus line serves a majority of the street, and the M106 serves the western portion of the street and connects it with East 106th Street.

In the 1989 film, When Harry Met Sally... Harry and Sally are seen buying their Christmas tree from "The Plant Shed," a long-established neighborhood store on West 96th Street, near Broadway. A year later, no longer a couple, Sally is seen buying her tree there and trudging home alone with the tree dragging behind her.