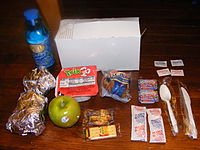 A-ration is a term used in the United States armed forces for a meal provided to troops which is prepared using fresh, refrigerated, or frozen foods. The use of fresh, refrigerated or frozen foods distinguish 'A' rations from 'B' rations, which use canned or preserved ingredients to enable them to be served without adequate refrigeration or freezer facilities. 'A' ration meals may be served in dining facilities ("DFAC"), prepared in the field by the use of field kitchens, or prepared at a fixed facility and transported to field locations in containers.

'A' rations today may include the Unitized Group Ration A (UGR-A), a hybrid meal kit designed to feed a group of 50 persons for one meal. The UGR-A has several different varieties, including a tray-based heat and serve (T-rat) form, heated by hot water immersion when a field kitchen is not available,[1] or the express form, with a self-heating module and disposable accessories.[2] The UGR-A is used to sustain military personnel during worldwide operations that allow organized food service facilities.