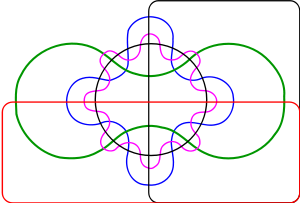 Edwards is a Life Fellow of Gonville and Caius College, Cambridge[3] and retired Professor of Biometry at the University of Cambridge, and holds both the ScD and LittD degrees. He has written several books and numerous scientific papers. He is best known for his pioneering work, with L.L. Cavalli-Sforza, on quantitative methods of phylogenetic analysis, and for strongly advocating Fisher's concept of likelihood as the proper basis for statistical and scientific inference. He has also written extensively on the history of genetics and statistics, including an analysis of whether Mendel's results were "too good", and also on purely mathematical subjects, such as Venn diagrams.[4][5][6][7][8][9][10]

In a 2003 paper,[11] Edwards criticized Richard Lewontin's argument in a 1972 paper that race is an invalid taxonomic construct, terming it Lewontin's fallacy.

After one postdoctoral research year he was invited by Luigi Luca Cavalli-Sforza to the University of Pavia, where, in 1961-1964, they initiated the statistical approach to the construction of evolutionary trees from genetical data, using the first modern computers. A year at Stanford University was followed by three years as Senior Lecturer in Statistics at the University of Aberdeen supervised by D. J. Finney and then two years as a Bye-Fellow in Science at Gonville and Caius College, Cambridge, during which he wrote his book Likelihood.[2]

The remainder of Professor Edwards’s career has been spent at Cambridge, ultimately as Professor of Biometry, during which he has published widely, including books on Venn Diagrams, Mathematical Genetics, and Pascal's triangle.[2]

His elder brother John H. Edwards (1928–2007) was also a geneticist and also an FRS; their father, Harold C. Edwards, was a surgeon. He was awarded the Telesio-Galilei Academy Award in 2011 for Biology.

Edwards is also known for his involvement in gliding, particularly within the Cambridge University Gliding Club and for his writing on the subject in Sailplane and Gliding magazine as "The Armchair Pilot".