The A27 is a major road in England. It runs from its junction with the A36 at Whiteparish (near Salisbury) in the county of Wiltshire. It closely parallels the south coast in Hampshire, then passes through West Sussex and terminates at Pevensey (near Eastbourne and Bexhill) in East Sussex.

It is one of the westernmost Zone 2 roads in the UK.

Between Portsmouth and Lewes, it is one of the busiest trunk roads in the UK.

Historically, for longer distance movement along the south coast, the M25 in combination with the M2, M20, M23 / A23, A3 / A3(M) and M3 has provided an attractive alternative to the actual south coast route of A259, A27 and M27. In 2002 an offpeak journey between Margate and Southampton via the M25 took 2 hours 30 minutes, and via the coastal route using the A259, A27 and M27 took 3 hours 50 minutes.[1] The reason why the coastal route is so much slower than the M25 alternative is largely due to a series of bottlenecks on the A27. These include Chichester, Arundel, Worthing and Polegate.[2]

The British government announced, in its 2013 spending review, that it would go ahead with improvements to the Chichester bypass.[3] The Highways Agency have said that the proposals will be subject to public consultation in July 2015. The preferred route will then be announced in September 2015 and the plan will be to start construction in February 2018 with a completion date of December 2019.[4][5][6]

A proposed scheme to bypass Lancing and Sompting (as well as other sections) was dropped in 1988.[7]

A proposed scheme to bypass Arundel was dropped in 2003, although the junction at the end of the dual carriageway has been partly made into an underpass.[8][9]

At Worthing, where the possibility of a bypass has often been discussed since 1967, even getting as far as passing the inspector's report at a public inquiry, the plan was dropped in 1996 following rising costs.[10] Arundel and Worthing are both areas of known traffic congestion during times of peak usage.[2][11]

A bridge over the level crossing at Beddingham was completed on 22 August 2008.[12] The original proposal called for a dual carriageway standard link with a bridge over the crossing.[13] However, the actual project involved improving the original single carriageway road by providing two lanes westbound and one lane eastbound between the Southerham and Beddingham roundabouts.[12]

Despite the limited improvements to the A27, it is still substantially quicker (usually more than an hour difference) to travel from Southampton to Margate via the M25 route compared to the coast route of A259, A27 and M27.[14][15]

Because of all the delays along its route, according to West Sussex County Council, the A27 is the most unreliable all purpose trunk road in England.[16] Further, it is widely considered by businesses on the coast to cost money and inhibit economic performance due to its unreliability and frequent congestion.[17] However proposals by central government to allow private sector financing to improve major roads may be a possible solution to the A27s demise.[18]

Actor Desmond Llewelyn, who portrayed Q in a large portion of the James Bond film series, was fatally injured in a car accident on the A27 in 1999.[19]

At the Shoreham Airshow on 22 August 2015, a Hawker Hunter crashed into the A27, striking several vehicles and killing eleven people.[20] The road was completely closed for eight days and did not fully reopen until 16 September 2015.

A27 near Brighton and Hove, East Sussex

The road starts at its junction with the A36 at Whiteparish. It runs through Romsey, Chilworth, at which point it follows a Roman Road, Swaythling, West End and Bursledon. It then closely parallels the south coast and travels on via Fareham, Cosham, Havant, Chichester, Arundel, Worthing, Lancing, Shoreham-by-Sea, Hove, Brighton, Falmer, Lewes and Polegate where it then terminates at Pevensey in East Sussex.[21]

A section of the A27 running from the eastern end of the M27 to the end of the road at Pevensey forms part of, what was known as, the South Coast Trunk Road. Much of the road has been improved to dual carriageway standard, with the westernmost section of the trunk portion even having as much as four lanes plus a hard shoulder in each direction, and on a motorway alignment with grade-separated junctions. This is perhaps a reflection that the M27 was once proposed to run as far as Chichester.[22]

The road runs east from Portsmouth to Havant then on to the Warblington/ Emsworth exit. Beyond Warblington the dual carriageway east has no junctions in it until it reaches Chichester, where the by-pass has five roundabouts and one traffic signal controlled junction, that disrupt the mainline flow of the road.[4][23] The Chichester by-pass is regularly subject to congestion and although a public inquiry has proposed improvements, those improvements are currently on hold.[4]

East of Chichester the road largely retains a two-lane dual-carriageway standard. There are, however a couple of sections of single-carriageway; at Arundel and at Worthing.[1] These are both areas of known traffic congestion during times of peak usage.[24]

At the junction of the A27 and the A24, the A27 has a brief section where the road is designated 'A27' and 'A24' before continuing from the 'Grove Lodge' roundabout where the road is named "Upper Brighton Road".[21] After Worthing, the A27 passes Sompting on the Sompting Bypass before passing through Lancing where there are traffic lights and a roundabout which disrupt traffic flow. Just before the road crosses the River Adur near Shoreham via the 'Shoreham flyover' (constructed 1968-70[25]), there is a traffic light-controlled intersection close to Lancing College and the headquarters of Ricardo plc which was the scene of a fatal aircrash during the Shoreham Airshow 2015 on 22 August 2015, killing eleven people on the ground.[26] After the 'flyover' over the Adur, the A27 then runs past the Holmbush interchange (Shoreham-by-Sea) and on through the Southwick Hill Tunnel, at that point entering East Sussex.

Later, it passes Brighton — where it is known as the Brighton Bypass [27] — and around the South Downs. The junction of the A23 and the A27 is often slow in the morning rush hour.

It then passes around Falmer with this section of road having three lanes in each direction but loses the third lane later. When Brighton and Hove Albion play at home this section can become congested due to its proximity to The American Express Community Stadium.

Afterwards, it passes south of Lewes where it meets the A26 road to Newhaven.

Here, the road becomes a single carriageway standard and, until 2008, crossed a level crossing until it was bypassed.

The south coast multi model study recommended a dual carriageway, but the Highways Agency built it to a cheaper single-carriageway standard. Plans are still proposed for upgrading this later.[1][28]

The road afterwards reverts to a dual carriageway with access to the A22, which provides links to Eastbourne and Hailsham.

The road then. once again. turns into a single carriageway near Pevensey, where the road ends, and the South Coast Trunk Road transfers over to the A259; this coast road starts in Emsworth and shadows the route of the A27.

Work on the contentious Bexhill to Hastings link road commenced in early 2013. The road will provide a more direct link from the A27 to the A28 road via the A259 road.[29]

Landmarks on the route 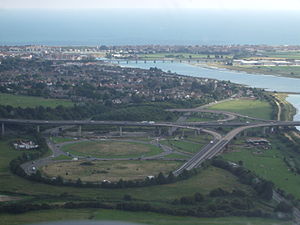 A27 crossing the Adur flyover, near Shoreham, West Sussex

Some news organisations have been sceptical about this announcement, claiming that in the past "Governments have a habit of announcing big plans for the roads, only to shelve them later on when the money gets tight."[31][32]