The A303 is a 92-mile long trunk road in England. It is the main road between Basingstoke in Hampshire and Honiton in Devon. The M3, the A303 and the A30 together make up one of the main routes from London to South West England, running from London to Land's End in Cornwall. It is a primary A road throughout its length and follows a roughly parallel path to the West of England Main Line.

The A303 is subject to several upgrade proposals, some of which have been controversial. Despite being a primary route to southwestern England, the A303 is frequently congested on the route's single carriageway sections.

The A303 was created on 1 April 1933[1] by a renumbering of several different routes to provide a long bypass for through traffic for a section of the A30. Parts of the route, such as the section past Stonehenge, have been a right of way for people, wagons, and later motor vehicles for centuries. Running from the M3 motorway towards the south west of England these were:

Since the designation of this route, various bypasses have been built.

The A303 starts at the M3 motorway south of Basingstoke at Junction 8, as a dual carriageway. It heads south west, crossing the A34 road near Bullington before passing south of Andover and bypassing Amesbury. The route then becomes single carriageway before passing Stonehenge. After Winterbourne Stoke the route once again becomes dual carriageway from Yarnbury Castle and across the Wylye valley, meeting the A36 at Deptford. There is then another section of single carriageway road, coming out of the Wylye valley and up to the crest of the Great Ridge, before a further section of dual two lane road down from the hill crest near Berwick St Leonard. Then single carriageway again in the valley and through the village of Chicklade, before following the terrain over to Mere, where it runs north of the town as another dual carriageway bypass. Continuing west, it passes south of Wincanton and then north of Sparkford to a roundabout where the road reverts once more to single carriageway. At Yeovilton the road becomes dual two lane again, and connects with the A37 which joins it until it reaches the end of the bypass. This final section of dual carriageway ends at South Petherton. It runs north of Ilminster where it meets the A358 road. After this, the route is more south westerly through the Blackdown Hills, where it is a narrow road following the contours of the land. The end of the A303 is reached where it joins the A30. Between Ilchester and Shores Bridge (over the River Parrett, east of South Petherton) the road follows the course of the Roman Fosse Way. 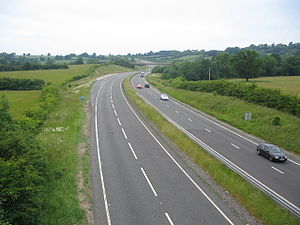 Looking west along the A303 near Bourton 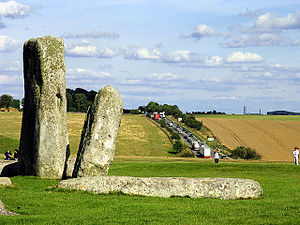 A303 passing close to Stonehenge. 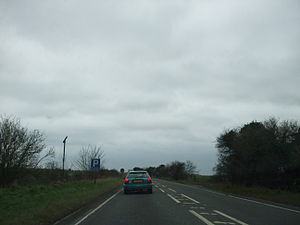 One third of the road, between the M3 and Stonehenge, is a single stretch of dual carriageway. The rest is divided equally between intervening sections of single and dual carriageway road (six sections of each in total). The Highways Agency has had plans for several years to upgrade the rest of the route to dual carriageway; however none of these upgrades are currently under construction.

The most controversial of the planned alterations was the proposal to construct a road tunnel alongside the Stonehenge World Heritage Site. On 5 June 2003, 7.7 miles (12.4 km) of improvements, including the proposed 1.3-mile (2.1 km) bored Stonehenge road tunnel under land adjacent to Stonehenge, were announced by the Secretary of State for Transport as part of a wider announcement of road improvements. A public enquiry into whether the plans were adequate was announced; it concluded that they were, despite protests from charities and landowners that the tunnel should be longer. On 31 October 2005 it was announced that there was to be a review of the options for Stonehenge, starting in January 2006, as costs had doubled.[2] The government cancelled the whole scheme in December 2007.[3]

In November 2004 plans to improve the route through the Blackdown Hills (an Area of Outstanding Natural Beauty) were abandoned in favour of upgrading the A358 from Ilminster to the M5 motorway at Taunton to reduce traffic west of Ilminster.[4] Also incorporating plans to widen the Ilminster bypass from South Petherton to a dual 2 lane road, these were the subject of a public consultation in March 2007 but were shelved in 2009 when it was concluded that the dualling could not be funded from the Regional Funding Allocation for the South West.[5]

The schemes were remitted to the London to South West and South Wales Multi-Modal Study (SWARMMS), and the conclusion of the report was that all of the schemes east of Ilminster should go ahead and that to avoid building a dual carriageway through the Blackdown Hills the A358 should be upgraded to the M5 motorway at Taunton.[8] As of 2009 none are considered to be regional priorities so no other improvements are likely to be funded before 2019.[9]

The road in popular culture

Kula Shaker performed their first impromptu gig at the Glastonbury Festival, which can be reached via the A303. They used this as the title of their song 303[10] on the album K. It was also mentioned in the Levellers' song "Battle of the Beanfield", about the attack by police on travellers celebrating the Solstice at Stonehenge (1 June 1985): "Down the '303 at the end of the road, Flashing lights, exclusion zones".[11]

Prior to the broadcast of Series 15 of Top Gear, the cast of Jeremy Clarkson, Richard Hammond and James May were spotted and recorded driving along the A303 in what appeared to be house cars. The video was recorded and put on YouTube.[12]

The BBC broadcast a documentary about the A303 on 19 May 2011 on BBC Four, called A303 Highway to the Sun.[13] The writer Tom Fort drove the length of the A303 in a Morris Traveller, making various stops.[14] In 2012 Fort published a book The A303: Highway to the Sun; the book covers the history of the road, and British road planning, together with landscape, history and general travel writing.[15]