From Infogalactic: the planetary knowledge core
(Redirected from A30 road (Great Britain))
Jump to: navigation, search
For other roads designated A30, see A30 (disambiguation).

The A30 used to provide the most direct route from London to the South West; nowadays much of this function is performed by the M3 motorway and the A303 road. However, the section from Honiton to Land's End retains trunk road status, and is a dual carriageway for most of its length.

The A30 begins at Henlys Roundabout, a junction with the A4 near Hounslow. It runs along the south side of Heathrow Airport, then past Ashford and Staines-upon-Thames, before reaching the M25 motorway. This first section is entirely dual carriageway.

After crossing the M25, the A30 runs parallel to the M3 all the way to Basingstoke, bypassing Egham and passing through Bagshot, Camberley, Hartley Wintney and Hook.

Just west of Basingstoke, at junction 8 of the M3, the A303 begins. The A30 runs parallel to this road all the way to just north-east of Honiton, passing through Stockbridge, Salisbury, Shaftesbury, Sherborne, Yeovil, Crewkerne and Chard.

Between the M25 and Honiton, the A30 is mostly single carriageway, carrying local traffic. However, there are short stretches of dual carriageway near Camberley, near Basingstoke and around Salisbury, as well as all the way between Sherborne and Yeovil. 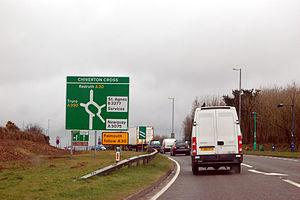 Approaching Chiverton Cross from the east

This section is a major trunk road as far as Penzance.[1] It is mostly dual carriageway, but there are several short sections of single carriageway.

The original route of the A30 went from Basingstoke to Salisbury via Andover, but was rerouted to Stockbridge on 1 April 1933. It originally ended in Penzance, being extended to Land's End in 1925.[2][3][4]

The A30 formerly ran through Exeter via Honiton Road to Heavitree Bridge, Fore Street Heavitree to Livery Dole, Heavitree Road to Paris Street. At the junction with High Street the A30 branched left and south-west and merged with the former A38 to Fore Street, New Bridge Street and Exe Bridge. At the west side of the bridge, the A38 branched left and south via Alphington Street, the A30 ran through Cowick Street, Dunsford Road and Pocombe Hill. At Pocombe Bridge, the A30 branched right and north to Tedburn St Mary.

The Okehampton bypass, which opened on 19 July 1988, goes to the south of the town, cutting through the northern edge of Dartmoor National Park in Devon. In the 1980s, the route of the bypass was the subject of a prolonged campaign from conservationists, including Sylvia Sayer, who preferred a route to the north of the town through agricultural land.[6]

The Hayle bypass was built in the mid-1980s.[citation needed] 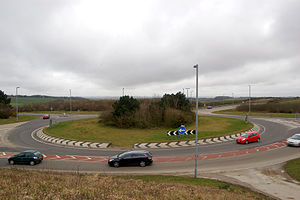 The section between Honiton and Exeter in East Devon was dualled in 1999 as a dual carriageway giving quicker access to Exeter International Airport. This road was built under the 'Design Build Finance Operate" scheme by the private consortium 'Connect A30', who funded its construction, and who receive a 'shadow toll' from the government for each vehicle that travels along this section of the road.[7] Archaeological investigations during the work found a Roman cavalry garrison and later settlement at Pomeroy Wood.[8]

There were many protests by environmentalists against the damage caused by the building of this road, and the particular nature of the DBFO scheme, with a long-lasting occupation of sites on the planned route, focused around the village of Fairmile. Swampy became well known for his part in this protest.

During 2006 one of the main bottlenecks on the road was removed when the Merrymeet roundabout between Okehampton and Exeter near Whiddon Down was replaced with a grade-separated junction and dual carriageway.[9]

Since the Bodmin to Indian Queens project was completed in late 2007, the resultant new dual carriageway runs south around Goss Moor with the existing road converted to a cycle lane.[10] This means the A30 is virtually entirely dualled between Exeter and the A30/A39 junction at Carland Cross near Truro.

In December 2012 it was announced that the 2.8 miles (5 km) section from near the village of Temple to Higher Carblake would be upgraded to a dual carriageway[11] and building started in early 2015, and is expected to end later in 2016.[12] Sceme information is available on the Cornwall County website[13] and the website of Kier, the construction company undertaking the works.[14] When this scheme completes during late 2016 it creates a continuous dual carriageway A30 between the M5 (junction 30) at Exeter and Carland Cross in Cornwall.

The stretch between Carland Cross and Chiverton Cross would have meant a continuous dual carriageway from Exeter right through to Camborne, however this was shelved in 2006 as it not considered a regional priority. (The other was the Temple to higher Carblake scheme, now in progress).[15]

In Cornwall the A30 previously crossed Goss Moor along a single carriageway section of the road between Victoria and Indian Queens. This was a major bottleneck in the county's transport system until 2007. An iron railway bridge is also situated in the middle of this section in which the Par–Newquay branch line crosses. This was built a long time before the road was dualled at both ends, and so can only fit a single carriage way beneath it. Due to its height (14 ft 3 in), many lorries in previous years had crashed into it, blocking the whole road completely.

There were plans to restore the rest of the St Austell – Indian Queens freight line (currently only going as far up as St Dennis), and direct rail traffic that way, but this plan was dropped. The road had been subject to a long-running campaign for expansion. As Goss Moor is a national nature reserve,[16] it is one of the most highly protected wildlife sites in the UK, and plans for expansion were strongly opposed.[17] In late 2004 a decision was finally reached, and a new dual carriageway now runs around the moor with the existing road converted to a cycle lane.[10] The first 4-mile (6.4 km) section of the new dual carriageway between Highgate Hill and the new Victoria Interchange opened at midnight on 9/10 May 2007. The former bottleneck of the iron bridge having now been eliminated means that problems with HGV lorries being stuck under the bridge should be a thing of the past. The remaining 3-mile (4.8 km) stretch of new dual carriageway between Victoria Interchange and Innis Downs roundabout opened on 25 June 2007.

The new dual carriageway means that average travel times along this section of the route have reduced significantly. Several petrol stations along the old route have now closed down, and the former route across Goss Moor is now silent once more. The remains of a Stone Age settlement were discovered along the new route during construction.[18]