From Infogalactic: the planetary knowledge core
(Redirected from A34 road (England))
Jump to: navigation, search
For other roads with the same name, see A34.

The A34 is a major road in England. It runs from the A33 and M3 at Winchester in Hampshire, to the A6 and A6042 in Salford.[1] It forms a large part of the major trunk route from Southampton, via Oxford, to Birmingham, The Potteries and Manchester. For most of its length (together with the A5011 and parts of the A50, and A49), it forms part of the former Winchester-Preston Trunk Road.[2][3] Improvements to the section of road forming the Newbury Bypass around Newbury were the scene of significant direct action environmental protests in the 1990s.[4] It is 151 miles (243 km) long.

The road is in two sections. The northern section runs south through Manchester and Cheadle, and bypasses Handforth, Wilmslow and Alderley Edge, before passing through Congleton, Newcastle-under-Lyme, and the southern suburbs of Stoke-on-Trent. It then continues south via Stone, Stafford, Cannock and Walsall, passes through the middle of Birmingham (where it briefly merges with the A41), before meeting the M42 motorway at junction 4 south of Solihull.

The road in effect combines with the motorway network and resumes. The southern section begins 45 miles (72 km) SSE (along the M40 motorway), at the Bicester

i/ˈbɪstə/ junction. It continues south as the straightest (western) part of the Oxford Ring Road, crossing the River Thames on the A34 Road Bridge. It then bypasses Abingdon, Didcot, and Newbury before finishing at the southern Winchester turning of the M3 motorway, junction 9. This part of the A34 forms the E05 European route. It is a dual carriageway throughout.

Together with parts of the M3 and the M40, the A34 forms an important route carrying freight from Southampton to the Midlands. Because of the volume of traffic, bypasses were built along this route – at Newbury on the A34, and at Twyford Down near Winchester on the M3 – but these were controversial for environmental reasons. Notably instead of cutting a short road tunnel through Twyford Down, the escarpment was carved out for the road traffic of the motorway and fledgling A34.

In 2004 works were carried out, at a cost of £38 million, continuing the road without being interrupted by a roundabout at junction 13 of the M4 motorway, which had caused a "bottleneck".[5] 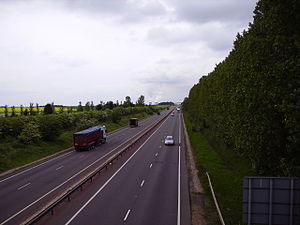 The A34 looking North towards Didcot, in Oxfordshire, with the power station visible

In Drayton, near Abingdon (Oxfordshire) a junction used by construction vehicles to gain access onto the A34 during its construction still exists as a "closed road", a few miles from the nearest alternative accesses. Plans are in discussion regarding possible re-opening of this closed access point.[citation needed] 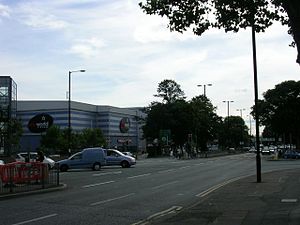 Kingsway in Manchester where the A34 nears the end of its route.

The original (1922) route of the A34 was Winchester to Oxford, much shorter than it is today.[6] It was extended to Manchester on 1 April 1935,[7] replacing part of the A42 (Oxford to Birmingham through Shipston-on-Stour, Stratford-upon-Avon and Henley-in-Arden), A455 (Birmingham to Stafford), part of the A449 (Stafford to Newcastle under Lyme) and A526 (Newcastle to Manchester).

In 1991, shortly after the completion of the M40 motorway, the road between Oxford and Solihull was renumbered. Between Chipping Norton and Solihull the road lost its primary route status and was renumbered A3400, and south of Chipping Norton the route became part of an extended A44. The A34 was diverted north from the Oxford Ring Road to the M40 along parts of the former routes of the A43 and A421. Much of the long-distance traffic carried by what is now the A3400 now uses the M40 to Birmingham, and the M42 and M6 to by-pass the city.

When the Newbury Bypass was opened in 1998, the old route through Newbury became part of the A339 and the B4640.

The long planned and often postponed Alderley Edge bypass was completed in November 2010, ahead of schedule and within the £52 million budget.[9] The official opening ceremony was conducted by the Chancellor of the Exchequer, the Rt Hon George Osborne MP,[10] on 19 November 2010.