The A361 is a major road in England and at 195 miles (314 km) is the longest 3 digit A road in the UK.[1] It runs south from Ilfracombe on the north Devon coast to Barnstaple, turning south-east to Tiverton then, after a break (the M5 connects the two sections), north east from Taunton in Somerset through Street and Glastonbury, past Frome and then into Wiltshire through Trowbridge, Devizes, Avebury and Swindon. It then runs through the eastern Cotswolds, via Lechlade, Burford and Chipping Norton and on through Banbury and Daventry before terminating at its junction with the A5 road at the village of Kilsby on the Northamptonshire-Warwickshire border near Rugby.

When first designated in 1922 the A361 ran only from Taunton to Banbury.[2] It was later extended west though Bampton to South Molton, on the route of the former A398, and from South Molton to Barnstaple and Ilfracombe, previously part of the route of the A373. In 1988, when the North Devon Link Road was opened, the A361 was switched to its present route. The old route from Taunton through Bampton to South Molton was downgraded to become the B3227.

In the 1970s the route was extended north from Banbury to Daventry providing an A road link from Swindon to the M1 motorway. 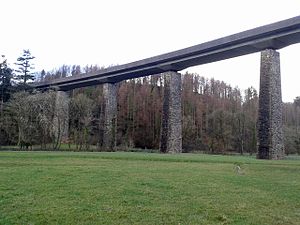 The road starts in Ilfracombe as part of the town's High Street, and is mostly single carriageway. The road passes through the villages of Knowle and Braunton, before becoming dual carriageway standard at Ashford, which continues for the short distance to Barnstaple. From there it passes the town's railway station then merges with the A39 for a short while before splitting back off near Portmore Golf Park. The section from Barnstaple to the M5 near Tiverton has been designated the North Devon Link Road, and enables relatively fast access to the Atlantic Highway, relieving pressure on the northern section of the A39 and A358. This section is a modern, wide single carriageway trunk road (which was de-trunked in 2002), apart from the 5-mile (8.0 km) stretch between Tiverton and the M5, which is dual carriageway. Tiverton Parkway railway station is situated close to the junction with the motorway in order to give easy rail connections for people driving from north Devon. Some sections of road are on the alignment of the Devon and Somerset Railway including the Castle Hill Viaduct over the River Bray, where the stone pillars formerly used to support a lattice girder railway bridge are now used to support the road.[3]

The road is merged with the A38 from Junction 27 of the M5 until Taunton. The rest of the road, from there to Swindon, is largely county-road class. It crosses the Somerset Levels separating Curry Moor from North Moor and Salt Moor, where in flood conditions such as the winter of 2012/2013 the Athelney spillway runs across the road[4] if the drain level at Curry Moor pumping station exceeds 7.1m,[5] making the road impassable. Next, it passes by the towns of Langport and Glastonbury and briefly merges with the A39 again. From there it continues northeast near Cranmore (the home of the East Somerset Railway) and becomes part of Frome bypass; it then passes through Trowbridge and Devizes towns. It crosses the A4 and here the A361 has been re-numbered the A4361 northwards of Avebury as it heads for Swindon town centre via Wroughton. It emerges near Stratton street market – becoming the A361 again at the junction with the A419 which passes north-east of Swindon. 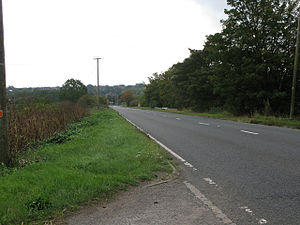 This road links Highworth to Lechlade and has no pavement for the entire length apart from a small section in Inglesham. It carries traffic at high speeds.[6]

The Thames Path National Trail joins (from Cricklade) before running into the verge as the right of way, with the traffic having a speed limit of 60 Miles per hour the pedestrian has to endure unkept vegetation and traffic until the Thames Path has a dangerous road crossing to Inglesham Church and along the river to Lechlade.[7][8]

From there it continues through Lechlade, Burford and Chipping Norton passing many Oxfordshire villages on its way. It is also the boundary for the Cotswolds AONB at Lechlade. It then enters Banbury from the southwest as an arterial road passing the Banbury Cross, and heading north, the A361 multiplexes on the Southam Road roundabout of the A422. For about two miles the route is signed as A422, the dual carriageway Hennef Way until Junction 11 of the M40. From there it heads north-east through the villages of Wardington, Chipping Warden, Byfield, Charwelton, and Badby. Sections of land were purchased in the 1970s after the road was upgraded from the B4038 to the A361 to straighten out some of the sharper corners but the vast majority of these works were never done. The road then multiplexes once more, this time with the A45 just outside Daventry. Once the A45 leaves Daventry for Coventry, the remaining section of single carriageway ring road is signed as A361, before it once again turns north to Kilsby to terminate on the A5 at its northern end.