From Infogalactic: the planetary knowledge core
(Redirected from A4032 road)
Jump to: navigation, search 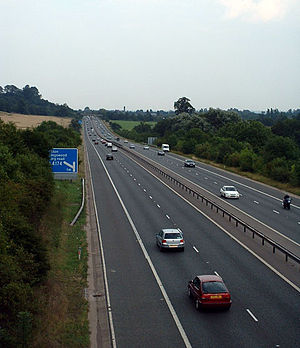 Looking north through a green corridor between junctions 1 and 2, during peak northbound (leaving city) traffic 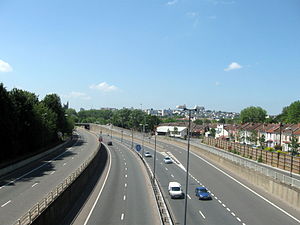 The southern end of the motorway at junction 3, where it becomes the A4032 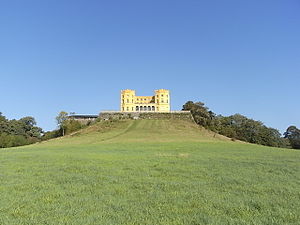 Stoke Park, Stoke Gifford, viewed in 2011 from the south, as visible from the northbound carriageway of the M32 motorway which now cuts across the former parkland. Rebuilt in 1750 by Norborne Berkeley, 4th Baron Botetourt, it is now known as The Dower House and is split into private apartments. 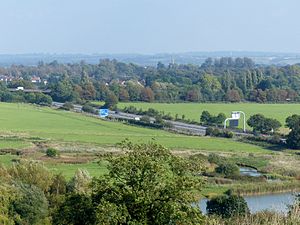 The M32 motorway seen from Stoke Park, with Duchess Pond in the foreground, (2014)

The M32 is a short motorway in South Gloucestershire and Bristol, England. It provides a fast link from Bristol city centre to the M4 and is part of the Bristol Parkway. At about 4.6 miles (7.4 km), it is one of Britain's shortest motorways. Most of the road has four lanes, though there is a climbing lane for 440 yards (400 m) north of Junction 2, and the short section between Junction 1 and the M4 has six lanes. Because of this, the motorway suffers daily rush hour congestion, which is worsened during school holidays and in the summer months.

The northern end of the M32 starts at Junction 19 of the M4, near Winterbourne Down. This junction was originally a grade separated roundabout junction, but was modified in such a way that made traffic joining the M4 need no longer give way at the roundabout, therefore increasing the freeflow of the junction slightly. However any M4 traffic wishing to U-turn must now do so at Junction 1 of the M32. The road then runs south between Filton in the west and Frenchay in the east. After meeting the A4174 at Junction 1, it passes to the east of Horfield, Lockleaze and Easton. Junction 2 is located next to Eastville Park, and meets the B4469 providing access to Horfield. Midway through the junction a 60 mph (97 km/h) speed limit begins. The motorway continues further south and terminates through Junction 3 north of St Paul's. The road continues as the A4032 into the centre of Bristol with a much lower speed limit of 30 mph (48 km/h).

Originally called Hambrook Spur (from the M4 to Bristol), or the Bristol Parkway,[1] the motorway was constructed between 1966 and 1975[2] and opened to traffic in stages:

It was originally planned to be a key radial link through to the hub of a network of radial and ring roads within a rectangle encompassing Bristol. Of this three convenient sides were the M4 (north eastern side), the M5 (north western side) and the tidal reaches of the River Avon (south western side),[3] the south eastern side not being defined by landmarks.

A bus lane was constructed in 2008 on the southbound carriageway of the A4032, Newfoundland Way, the short road which links the end of the M32 at Junction 3 with the Cabot Circus development. The lane starts just south of Junction 3, at an offside merge, and runs for 370 yards (340 m), adjacent to the central reservation. It becomes a general running lane for its final 165 yards (151 m) to a signal controlled junction, which is part of the new road layout for Cabot Circus. The hard shoulder and the remaining width of carriageway were rebuilt as two narrowed running lanes for general traffic, and a lower 30 mph (48 km/h) speed limit was imposed on both southbound and northbound carriageways of this section.[4]

Data from driver location signs are used to provide distance and carriageway identification information.[5] Where a junction spans several hundred metres, both the start and end locations are given.