The Hughes AIM-4 Falcon was the first operational guided air-to-air missile of the United States Air Force. Development began in 1946; the weapon was first tested in 1949. The missile entered service with the USAF in 1956.

Produced in both heat-seeking and radar-guided versions, the missile served during the Vietnam War with USAF McDonnell Douglas F-4 Phantom II units. Designed to shoot down slow bombers with limited maneuverability, it was ineffective against maneuverable fighters over Vietnam. Lacking proximity fusing, the missile would only detonate if a direct hit was scored. Only five kills were recorded.

With the AIM-4's poor kill record rendering the F-4 ineffective at air-to-air combat, the fighters were modified to carry the AIM-9 Sidewinder missile instead. The Sidewinder was much more effective and continues to serve the armed forces of the United States to this day.

Development of a guided air-to-air missile began in 1946. Hughes Aircraft was awarded a contract for a subsonic missile under the project designation MX-798, which soon gave way to the supersonic MX-904 in 1947. The original purpose of the weapon was as a self-defense weapon for bomber aircraft, but after 1950 it was decided that it should arm fighter aircraft instead, particularly in the interception role.

The first test firings took place in 1949, at which time it was designated AAM-A-2 and given the popular name Falcon. A brief policy of awarding fighter and bomber designations to missiles led it to be redesignated F-98 in 1951. In 1955, the policy changed again, and the missile was again redesignated GAR-1.

The initial GAR-1 and GAR-2 models entered service in 1956.[1] It armed the Northrop F-89 Scorpion, McDonnell F-101B Voodoo and Convair F-102 Delta Dagger and F-106 Delta Dart interceptors. The only other users were Canada, Finland, Sweden and Switzerland, whose CF-101 Voodoo, Saab 35 Draken and Dassault Mirage IIIS carried the AIM-4 Falcon. Canada also hoped to use them on the Avro CF-105 Arrow interceptor; however, this was never realized because of the Arrow's cancellation.

Fighters carrying the Falcon were often designed with internal weapons bays for carrying this missile. The Scorpion carried them on wingtip pods, while the Delta Dagger and Delta Dart had belly bays with a trapeze mechanism to move them into the airstream for launch (see picture above). The F-101B had an unusual bay arrangement where two were stored externally, and then the bay door would rotate to expose two more missiles. It is likely the F-111 Aardvark's internal bay would have accommodated the missile as well, but by the time of service, the Air Force had already dropped the Falcon for use against fighters, as well as the idea of using the F-111 as an air combat fighter.

The GAR-1 had semi-active radar homing (SARH), giving a range of about 5 mi (8.0 km). About 4,000 missiles were produced. It was replaced in production by the GAR-1D (later AIM-4A), with larger control surfaces. About 12,000 of this variant were produced, the major production version of the SARH Falcon.

The GAR-2 (later AIM-4B) was a heat-seeker, generally limited to rear-aspect engagements, but with the advantage of being a 'fire and forget' weapon. As would also be Soviet practice, it was common to fire the weapon in salvos of both types to increase the chances of a hit (a heat-seeking missile fired first, followed moments later by a radar-guided missile). The GAR-2 was about 1.5 in (40 mm) longer and 16 lb (7 kg) heavier than its SARH counterpart. Its range was similar. It was replaced in production by the GAR-2A (laterd AIM-4C), with a more sensitive infrared seeker. A total of about 26,000 of the infrared-homing Falcons were built. 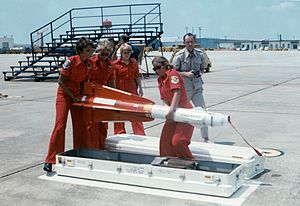 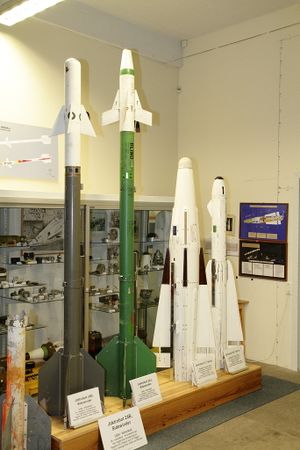 All of the early Falcons had a small 7.6 lb (3.4 kg) warhead, limiting their lethal radius. Also limiting them tactically was the fact that Falcon lacked a proximity fuze: the fuzing for the missile was in the leading edges of the wings, requiring a direct hit to detonate.

In 1958, Hughes introduced a slightly enlarged version of the Falcon, initially dubbed Super Falcon, with a more powerful, longer-burning rocket engine, increasing speed and range. It had a larger warhead (28.7 lb / 13 kg) and better guidance systems. The SARH versions were GAR-3 (AIM-4E) and the improved GAR-3A (AIM-4F). The infrared version was the GAR-4A (AIM-4G). About 2,700 SARH missiles and 3,400 IR Super Falcons were produced, replacing most earlier versions of the weapon in service.

The Falcon was redesignated AIM-4 in September 1962.

The final version of the original Falcon was the GAR-2B (later AIM-4D), which entered service in 1963. This was intended as a fighter combat weapon, combining the lighter, smaller airframe of the earlier GAR-1/GAR-2 weapon with the improved IR seeker of the GAR-4A/AIM-4G.

A larger version of the Falcon carrying a 0.25-kiloton nuclear warhead was developed as the GAR-11 (later designated the AIM-26 Falcon), while a long-range version was developed for the North American XF-108 Rapier and Lockheed YF-12 interceptors as the GAR-9 (later AIM-47 Falcon).

The Air Force deployed AIM-4 in May 1967 during the Vietnam War on the new F-4D Phantom II, which carried it on the inner wing pylons and was not wired to carry the AIM-9 Sidewinder. The missile's combat performance was very poor. The Falcon, already operational on Air Defense Command aircraft, was designed to be used against bombers, and its slow seeker cooling times (as much as six or seven seconds to obtain a lock on a target) rendered it largely ineffective against maneuvering fighters. Moreover, it could only be cooled once. Limited coolant supply meant that once cooled, the missile would expend its supply of liquid nitrogen in two minutes, rendering it useless on the rail. The missile also had a small warhead, and lacked proximity fusing. As a result, only five kills were scored, all with the AIM-4D version.[2] (The Falcon was also experimentally fired by the F-102 Delta Dagger against ground targets at night using its infrared seeker.)

The weapon was unpopular with pilots from the onset and was supplemented or partially withdrawn in 1969, to be replaced in the F-4D by the Sidewinder after retrofitting the proper wiring. Col. Robin Olds, commanding the F-4D-equipped 8th Tactical Fighter Wing, was an outspoken critic of the missile and said of it:

By the beginning of June, we all hated the new AIM-4 Falcon missiles. I loathed the damned useless things. I wanted my Sidewinders back. In two missions I had fired seven or eight of the bloody things and not one guided. They were worse than I had anticipated. Sometimes they refused to launch; sometimes they just cruised off into the blue without guiding. In the thick of an engagement with my head twisting and turning, trying to keep track of friend and foe, I'd forget which of the four I had (already) selected and couldn't tell which of the remaining was perking and which head was already expiring on its launch rail. Twice upon returning to base I had the tech rep go over the switchology and firing sequences. We never discovered I was doing anything wrong.[3]

Col. Olds became exasperated with the Falcon's poor combat performance. He ordered his entire fighter wing rewire the F-4D's to carry more reliable Sidewinders. Although it was an unauthorized field modification, the entire air force eventually followed his example. An effort to address the limitations of AIM-4D led to the development in 1970 of the XAIM-4H, which had a laser proximity fuze, new warhead, and better maneuverability. It was cancelled the following year without entering service.

The AIM-4F/AIM-4G Super Falcon remained in USAF and ANG service, primarily with Convair F-102 Delta Dagger and F-106 Delta Dart interceptors, until the final retirement of the F-106 in 1988.

The AIM-4C was also produced as the HM-58 for the Swiss Air Force for use on the Dassault Mirage IIIS, and license-manufactured in Sweden for the Swedish Air Force (as the Rb 28) to equip the Saab 35 Draken and 37 Viggen. The seeker of the missile was also re-designed. 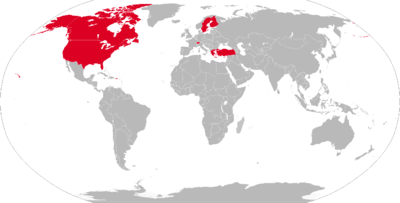 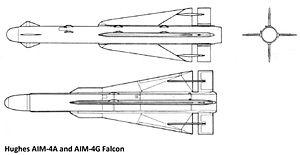