From Infogalactic: the planetary knowledge core
(Redirected from AT-7 Saxhorn)
Jump to: navigation, search

The missile was developed by the Tula KBP. It is very similar to the AT-4 Spigot in external appearance (having three main fins); however, the missile is much lighter - primarily because of the reduced fuel load, which reduces the maximum range to 1,000 metres (3,300 ft).

During the 1980s, an upgraded version of the missile was developed - the Metis-M 9M131 (sometimes labelled Metis-2). Fired from the same launcher, the new missile is much larger and heavier, with an increased range and a larger warhead. NATO labelled this missile the AT-13 Saxhorn-2.

The missile was introduced into the Russian army in 1979 to supplement the AT-4 Spigot at company level. The system is lighter than the AT-4 Spigot system, due to a less complicated tripod launcher and a lighter missile.

In Russian service, the AT-7 is deployed with motor rifle companies, with three launchers per company. The missile is operated by a two-man team; the gunner carries the 9P151 launching post and one missile, his assistant carries an additional three missiles.

The export prices of the missile and firing post in 1992 were:

The missile is fired from the 9P151 launching post, which has a simple tripod for support. It can also be fired from the shoulder - but this apparently requires more skill on the part of the operator. The launching post weighs 10.2 kilograms (22 lb). The missile is launched from the tube by a booster rather than the gas generator used on the AT-4 Spigot system, despite both missiles being designed by the same design bureau. The 9S816 guidance system is powered by a thermal battery attached to the launch tube shortly before launch - the missile itself is remotely powered along the guidance wires.

The missile can be launched from an enclosed space, such as a building or cave, but requires at least 6 metres (20 ft) behind the launcher, and a total internal volume of at least 100 cubic metres (3,500 cu ft). The missile has a short minimum range of 40 metres (130 ft) and can engage targets moving at up to 60 kilometres per hour (37 mph).

The missiles warhead is a single HEAT shaped charge. 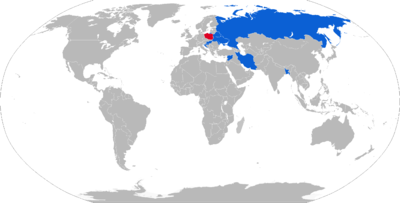 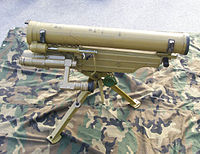