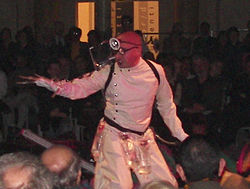 The Quarantine Inspector in A Dream Play

A Dream Play (Swedish: Ett drömspel) was written in 1901 by the Swedish playwright August Strindberg. It was first performed in Stockholm on 17 April 1907. It remains one of Strindberg's most admired and influential dramas, seen as an important precursor to both dramatic Expressionism and Surrealism.

The primary character in the play is Agnes, a daughter of the Vedic god Indra. She descends to Earth to bear witness to problems of human beings. She meets about 40 characters, some of them having a clearly symbolical value (such as four deans representing theology, philosophy, medicine, and law). After experiencing all sorts of human suffering (for example poverty, cruelty, and the routine of family life), the daughter of gods realizes that human beings are to be pitied. Finally, she returns to the Heaven and this moment corresponds to the awakening from a dream-like sequence of events.

The use of a dream to represent a setting in a theatrical work appealed to the traditionally realist author in that Strindberg expresses realistic concerns such as materialism, class struggle, gender role struggle, and the destruction of traditional marriage in (as stated in the preface) "the disconnected but apparently logical form of a dream. Everything can happen; everything is possible and likely."

The play itself represents a change in his style, one that would have widespread influence on the development of modernist drama. Eschewing realism, Strindberg explained that he had modeled his play, not on the pattern of cause and effect that had characterized the well-made play, but on the associative links found in dreams. Locales dissolve and give way to each other; time both moves forward and backward. During the course of the play, a castle grows up in the garden, as if it were a plant. At the play's end, it burns, revealing a wall of suffering and despairing faces, then blossoms at its top in a huge chrysanthemum.

The best description of the play's style can be found in Strindberg's prefatory note:

The characters split, double, multiply, evaporate, condense, dissolve and merge. But one consciousness rules them all: the dreamer's; for him there are no secrets, no inconsistencies, no scruples and no laws. He does not judge or acquit, he merely relates; and because a dream is usually painful rather than pleasant, a tone of melancholy and compassion for all living creatures permeates the rambling narrative.

The play itself doesn't center around a single well-defined individual, but rather simply follows someone who seems to be a combination of different professional men, all confused. The feminine foil to these men is Indra's Daughter, a Christ-like figure played in the original production by Harriet Bosse, Strindberg's ex-wife.

Psychology of the author

Strindberg wrote it following a near-psychotic episode. During that time, he came to be extremely disturbed, thinking witches were attempting to murder him.[citation needed] He later wrote a memoir about this period of his life. Eventually, though, he recovered, thanks to his mother-in-law.[1]

Previously, Strindberg had seen himself as a martyr, constantly persecuted by women. This affected his view of the overall relationship between the sexes, and of course his writing. He finally realized that he was playing a part in his failed relationships after his third marriage (to Harriet Bosse) collapsed. Bosse was behind the main character of A Dream Play.

The play, called by Strindberg "the child of my greatest pain," reflects the author's observation that life is an illusion, similar to a dream.

The world premiere of "A Dream Play" was performed at The Swedish Theatre in April 1907, six years after it was written. Harriet Bosse, Strindberg's third wife (divorced by this time) played Indra's daughter. Victor Castegren directed the production and Carl Grabow was the designer. Critics at the time noted that the demands of the play made it nearly impossible to mount a satisfactory production. Strindberg himself desired to re-stage it in his Intimate Theatre, but ultimately it was not successful.

A new adaptation by Emma Reay was performed at Oxford Playhouse in 2011.[6] Dreamplay: Asian Boys Vol. 1, playwright Alfian Sa'at's loose adaptation, premiered in Singapore in 2000 and was re-staged in 2014.[7]