Abbaretz (Abarrez in Breton) is a French commune in the Loire-Atlantique department in the Pays de la Loire region of western France.

The inhabitants of the commune are known as Abbarois or Abbaroises.[1]

Abbaretz has been previously known by the following names:

The name Abbaretz originates from the Gallo language which is the language of Upper Brittany: Abarèt in Gallo (as per ELG)[3]

Until the 8th century the parish of Abbaretiacum had its own Lord Bishop under the Bishops of Nantes. Following the invasion of Normandy and civil wars in Brittany in the 11th and 12th centuries Abbaretz ceased to be a feudal state. During the 10th century the lords of Chateaubriand took effective possession of the territory of Abbaretz: to enter Abbaretz was a privilege they gave to one of their younger sons, known by the name of Le Boeuf who was First Lord of Nozay and Issé. In 1123, however, the Duke Conan confirmed the church of Nantes as the owner of the church at Abbaretz.

In June 1230 Brient Le Boeuf, called "The Old Man", Lord of Issé, donated to the Cistercian Abbey of Notre Dame de Melleray, for the salvation of his soul, some land he owned at Abbaretz. The monks of this monastery built a barn and a chapel dedicated to St. Margaret. At the same time, Geoffroy de Trent abandoned his portion of Melleray Abbey and two-thirds of all the tithes of the land of the Abbaretz forest ("decimas terre sue de foresta de Abbaret").

In 1242, Guégon Le Gruc and his wife Agathe of Trent (daughter of Olivier and niece of Geoffroy of Trent) confirmed this pious donation. The parishioners of Abbaretz tried to oppose the increase in their tithes by the monks at Melleray. From the documents in the process, it can be seen that the area called the Forest of Abbaretz was inhabited in 1235 by Daniel and Bernard de Rozé, Guy Lague, Robin Daniel, Guillaume Robin, Riwallon Le Duc, Guillaume Robert, Pierre Constanz, Geffroy Grimaut, Guillaume Raffrey, and Judicaël Troynel who were all vassals of Geoffroy Trent.

When the diocese of Nantes was divided into archdeaconries and deaneries, the parish of Abbaretz was included in the deanery of Chateaubriand, a member of the archdeaconry of Mee.

The fiefs component of the Lordship of Abbaretz was composed of several parts:

The headquarters of the most important Lordship was located at the Chateau de La Riviere which originally belongs to the Briant (or Brient) family and then passed into the hands of the lords of Chateaubriant, then the House of Montmorency, and then the Prince of Condé.

In 2010 the town had 1,916 inhabitants. The evolution of the number of inhabitants is known through the population censuses conducted in the town since 1793. From the 21st century a census of municipalities with fewer than 10,000 inhabitants is held every five years, unlike larger towns that have a sample survey every year.[Note 5] [Note 6] 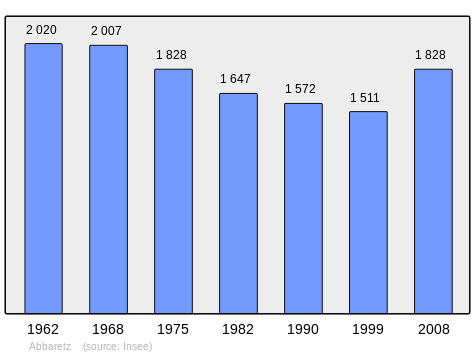 Percentage Distribution of Age Groups in Abbaretz and Loire-Atlantique Department

French and the local language of Gallo are spoken in the area. The Gallo language is in danger of extinction according to a study by Serge Jouin in his thesis: "The Gallo speech of Abbaretz and elsewhere ...", published in two volumes in 1982 and 1984. Abbaretz is also a point of survey for the linguistic atlas (ALBRAM) by Messrs. Guillaume and Chauveau.

View of Abbaretz from the top of the slag heap.