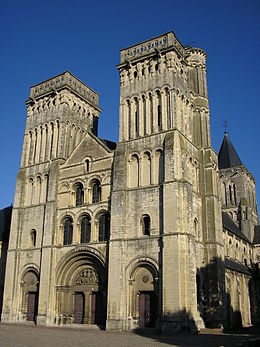 The Abbey of Sainte-Trinité (the Holy Trinity), also known as Abbaye aux Dames, is a former monastery of women in Caen, Normandy, now home to the Regional Council of Lower Normandy. The complex includes the Abbey Church of Sainte-Trinité.

The abbey was founded as a Benedictine monastery of nuns in the late 11th century by William the Conqueror and his wife Matilda of Flanders as the Abbaye aux Dames ("Women's Abbey"), as well as the Abbaye aux Hommes ("Men's Abbey"), formally the Abbey of Saint-Étienne. The works began in 1062, starting from the rear and finished in 1130. Matilda, who died in 1083, was buried in the choir under a slab of black marble.

William and Matilda's son, William II of England, also granted the abbey the manor of Horstead, in Norfolk, where Horstead Priory was established by the order, and continued until 1414.[1]

The original spires were destroyed in the Hundred Years' War and replaced by less striking balustrades in the early 18th century. The community of nuns were dispersed and suppressed by the French Revolution. In 1823 the local city council decided to transfer the ancient Hôtel-Dieu (possibly also founded by William the Conqueror, but more likely King Henry II of England), to the former cloister for use as a hospital, and the canonesses regular, who had assumed responsibility for the hospital from the two abbeys during the 14th century, established themselves there. The canonesses continued to operate there until 1908 when the facility was given to the Hospice Saint-Louis for use as a nursing home. 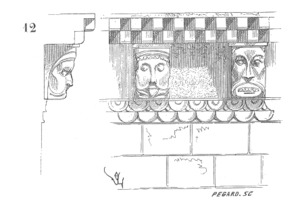 Detail of the abbey's stonework.

The façade has two large towers on the sides, each with doors leading to the aisles. The pediment of the central bay echoes the nave roof. The tympanum of the central portal depicts the Trinity and the four apocalyptic beasts, symbols of the Four Evangelists.

The nave is flanked by pointed arches surmounted by a gallery (triforium) which supports the groin vault, the first of this type built in Normandy (1130). The transept, in the centre of the church, houses the main altar. The northern transept is in Romanesque style, opening over a small apse (the chapel of the Blessed Sacrament) which houses the tabernacle. The southern transept is characterised by Gothic columns integrated within the Romanesque decoration.

The choir ends with an apse decorated by four columns and a gallery with fantastic figures. Also present is a crypt in honour of Saint Nicholas.