Robert de Grantmesnil served as abbot of Saint-Evroul, which he helped restore in 1050. He had become a monk at Saint-Evroul[2] before becoming its abbot.[3]

Orderic Vitalis entered the abbey as a young boy and later wrote a history of the abbey. 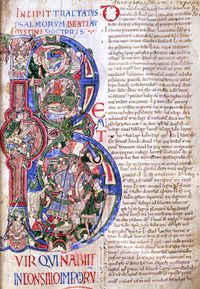 A manuscript from Saint-Evroul depicting King David on the lyre (or harp) in the middle of the back of the initial 'B'.

Normandy was the site of several important developments in the history of classical music in the 11th century. Fécamp Abbey and Saint-Evroul were centres of musical production and education. At Saint-Evroul, a tradition of singing had developed and the choir achieved fame in Normandy. After entering into a violent quarrel with William II of Normandy, Robert de Grantmesnil had been forced to flee to Rome in January 1061 and thence to the court of Robert Guiscard in Salerno, taking with him eleven of his monks, including his nephew Berengar. In his time, Saint-Evroul was famed for its musical programme and these eleven monks brought its musical traditions to the abbey of Sant'Eufemia (now part ot town of Lamezia Terme and different from Sant'Eufemia d'Aspromonte) in Calabria, a foundation of the Guiscards, of which Robert became abbot.[4]