From Infogalactic: the planetary knowledge core
Jump to: navigation, search
For other uses, see Abbottabad (disambiguation).

Abbottabad (/ˈæbətəbæd/ or /ˈɑːbtəbæd/[2]) (Urdu, Hindko: ایبٹ آباد Aibṭ ābād [ɛːbʈaːˈbaːd̪]) is a city located in the Hazara region of the Khyber Pakhtunkhwa province, in northeastern Pakistan. The city is situated in 110 kilometres (68 mi) north of the capital Islamabad, 130 kilometres (81 mi) from Rawalpindi and 150 kilometres (93 mi) northeast of Peshawar at an altitude of 1,260 metres (4,134 ft) and is the capital of the Abbottabad District. Kashmir lies to the east of the city. The city is well known throughout Pakistan for its pleasant weather, high-standard educational institutions and Military Establishment Pakistan Military Academy Kakul. It remains a popular hill station attracting hundreds of thousands of tourists every year. 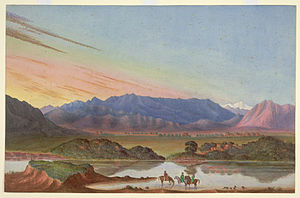 'The Rock Aornos from Huzara. From Nature by James Abbot 1850'

Abbottabad, under the British Raj, was the headquarters of the Hazara District during British rule of India. It was named after Major James Abbott who founded the town and district in January 1853[3] after the annexation of Punjab. He remained the first Deputy Commissioner of the Hazara district from 1849 until April 1853. Major Abbott is noted for having written a poem titled "Abbottabad", before he went back to Britain, in which he wrote of his fondness for the town and his sadness at having to leave it. In the early 20th century, Abbottabad became an important military cantonment and sanatorium, serving as the headquarters of a brigade in the Second Division of the Northern Army Corps.[4] The garrison consisted of four battalions of native infantry, of the Frontier Force (including the 5th Gurkha Rifles) and two native mountain batteries.[5]

In 1901, the population of the town and cantonment was 7,764[4] and the income averaged around Rs. 14,900. This increased to Rs. 22,300 in 1903, chiefly derived from octroi. During this time chief public institutions were built such as the Albert Victor unaided Anglo-Vernacular High School, the Municipal Anglo-Vernacular High School and the Government dispensary.[5] In 1911, the population had risen to 11,506 and the town also contained four battalions of Gurkhas.[6] In June 1948, the British Red Cross opened a hospital in Abbottabad to deal with thousands of patients who were being brought in from the Kashmir fighting areas.[7] 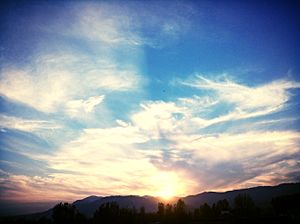 A sunset scene in Abbottabad.

In October 2005 Abbottabad was devastated by the Kashmir earthquake. Although most of Abbottabad survived, many older buildings were destroyed or severely damaged.[8] On 25 January 2011, Indonesian JI terrorist Umar Patek who was wanted in 2002 Bali bombings as well as a series of 2000 church bombings was arrested in Abbottabad.[9][10]

In May 2011, Abbottabad gained worldwide attention when U.S. President Barack Obama announced that Osama bin Laden had been killed in his compound in the city.[11][12] In February 2012, nine months after bin Laden was killed, Pakistani authorities demolished the compound where Osama bin Laden had lived for years.[13] 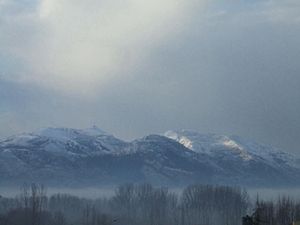 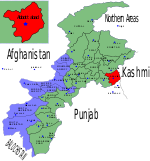 Location of Abbottabad within the district and province

The city is bounded at all four sides by the Sarban hills, from which residents and tourists can see breathtaking views of the region and city. The location of the city and the hills allows Abbottabad to experience pleasant weather in the summer and cold winters. The Dor river flows south of Abbottabad through the town of Harnol, eventually reaching Tarbela Dam, situated west of Abbottabad. Neighbouring districts are Mansehra to the north, Muzaffarabad to the east, Haripur to the west and Islamabad Capital Territory to the south. 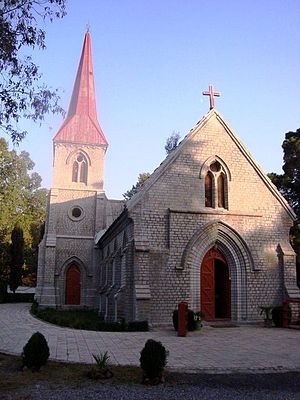 Est. in 1864, St. Luke's Church, Abbottabad is a historical church and remains a popular site for tourists.

According to the 1998 Census of the 881,000 who resided in the Abbottabad District, Hindko, a dialect of Punjabi, was spoken by 94.26% of the population, followed by Standard Punjabi at 2.30%, Pashto at 2.22% and Urdu at 1.05%.[15] Urdu is understood and spoken fluently by majority of the residents and used in markets, offices and formal functions as the official language. English is widely used in business and education.

Abbottabad is the headquarters of Hazara Division and Abbottabad District. The District Nazim, Commissioner, Deputy Inspector General of police and Forest Conservator, all reside in Abbottabad. The city is divided into localities, towns, colonies and neighbourhoods. In addition to the civil administration, the town is also the regimental headquarters for the Frontier Force Regiment, the Baloch Regiment and Pakistan Army Medical Corps and Kakul Military Academy is also located in Abbottabad.

Abbottabad's economy is largely based on tourism. It is known for its shady gardens, church bells and wide streets in the Old Cantonment which evoke the British colonial era. 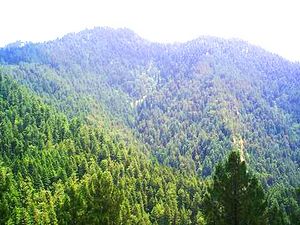 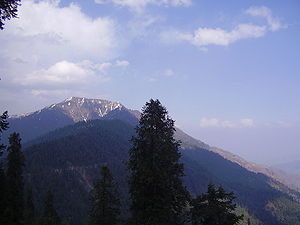 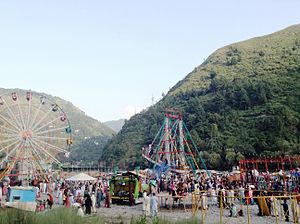 Abbottabad has been attracting tourists to the city since the colonial era, as it is a major transit point to all major tourist regions of Pakistan such as Nathiagali, Ayubia and Naran. According to the Imperial Gazetteer of India, "the town is picturesquely situated at the southern corner of the Rash (Orash) plain, 4,120 feet (1,260 m) above the sea".[5]

Like much of the mountainous Northern Areas, tourism is one of the important sources of income in Abbottabad. In the summer when temperatures rise to around 45 degrees Celsius in Punjab and Khyber Pakhtunkhwa, a large number of tourists travel to Abbottabad. The Karakoram Highway, which traces one of the paths of the ancient Silk Road, starts from Hasan Abdal on the N5 and heads north passing through the city, eventually reaching Khunjerab Pass. The Karakorum Highway is a major attraction itself for its views. The Karakoram, Himalayas and the Hindu Kush ranges can be approached from Abbottabad and it continues to be a transit city for tourists, serving as a base for visiting numerous nearby places, such as Hunza, Gilgit, Skardu and Indus Kohistan, of the Karakoram Range.[17]

Abbottabad is popular not just with visitors but with those looking to relocate. Its weather, peaceful reputation and the perceived security of a garrison have drawn many from other cities to work or educate their children. There was an influx of migrants from Azad Kashmir after the 2005 Kashmir Earthquake, another from the Swat District during military operations against militants in 2009 and 2010, and also from Waziristan after the army launched major operations against the Taliban in 2009.[18] There is an under construction £19m amusement park in the city located on a 50-acre site is includes a zoo, adventure sports facilities, restaurants and artificial waterfalls.[19]

Some popular tourist destinations in and around Abbottabad include:

Abbottabad has one of the country's highest literacy rates with 67% in 2007, and 87% in 2011 ranking first in Khyber Pakhtunkhwa and second overall in Pakistan(proof). The city also has a young demographic (ages 15–30) due to a large number of students who have come from across the country to study in its schools, for example PIPS, Army Burn Hall College, Army Public College and Abbottabad Public School. The city has a wide variety of post-secondary institutions, such as Ayub Medical College, Frontier Medical College, COMSATS University of Science and Technology, and the University of Engineering & Technology.

Abbottabad is also home to the Pakistan Military Academy, a four-year coeducational federal service military academy that provides training to the officers of the Pakistan Army.[20] The academy has three training battalions, and 12 companies. Another 2,000 guests each year, from over 34 countries, receive some training at PMA.

According to the Alif Ailaan Pakistan District Education Rankings 2014, Abbottabad is ranked 37 out of 146 districts in Pakistan in terms of the quality of education. For facilities and infrastructure, the district is ranked 67 out of 146. [21] A detailed picture of the district’s education performance is also available online. [22]

The Daily Mahasib, published since 1997, is a leading local newspaper of the city.[23]

The Abbottabad Falcons are the professional cricket team of Abbottabad plays in the national Twenty 20 and List A cricket tournaments. Apart from cricket, field hockey and taekwondo are the other popular sports here. Sports facilities in the city include:

Abbottabad's main public transport consists of modified Taxis, Carry pick-up vans Suzukis, which can accommodate anywhere from 1 to 14 people at one time. Taxis are also available as well as wagons that connect Abbottabad to the surrounding cities and towns (ex. Nawanshahr, Nathiagali, Sherwan, Dhamtour, Haripur, Mansehra) in the region. Abbottabad is also served by Daewoo Express and Niazi Express, the NATCO, Skyways and many other bus services. Pakistan Railways does not serve Abbottabad, however a PR Reservation Office is located in Fawara Chowk in the city centre. The nearest railway station is located in Havelian, which is the last and most northern station on the Pakistan Railway network. The station is approximately thirty minutes drive south from Abbottabad city centre.