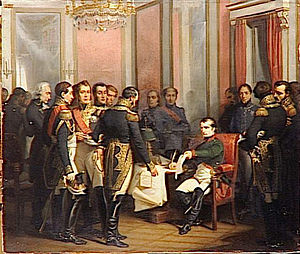 Napoleon's first abdication, signed at the Palace of Fontainebleau 4 April 1814

Abdication is the act of formally relinquishing monarchical authority.

The word abdication derives from the Latin abdicatio meaning to disown or renounce (from ab, away from, and dicare, to dedicate or relinquish). In its broadest sense abdication is the act of renouncing and resigning from any formal office, but it is applied especially to the supreme office of state. In Roman law the term was also applied to the disowning of a family member, such as the disinheriting of a son. Today the term commonly applies to monarchs, or to those who have been formally crowned. An elected or appointed official is said to resign rather than to abdicate.

Among the most notable abdications of antiquity are those of Lucius Cornelius Sulla, the Dictator, in 79 BC, Emperor Diocletian in AD 305, and Emperor Romulus Augustulus in AD 476.

Perhaps the most notable abdication in recent history is that of King Edward VIII of the United Kingdom and the Dominions. In 1936 Edward abdicated to marry American divorcée Wallis Simpson, over the objections of the British establishment, the governments of the Commonwealth, the Royal Family and the Church of England. It was the first time in history that the British or English crown was surrendered entirely voluntarily. Richard II of England, for example, was forced to abdicate after power was seized by his cousin, Henry Bolingbroke, while Richard was abroad.

During the Glorious Revolution in 1688, James II of England and VII of Scotland fled to France, dropping the Great Seal of the Realm into the Thames, and the question was discussed in Parliament whether he had forfeited the throne or had abdicated. The latter designation was agreed upon in spite of James's protest, and in a full assembly of the Lords and Commons it was resolved "that King James II having endeavoured to subvert the constitution of the kingdom, by breaking the original contract between king and people, and, by the advice of Jesuits and other wicked persons, having violated the fundamental laws, and having withdrawn himself out of this kingdom, has abdicated the government, and that the throne is thereby vacant." The Scottish parliament pronounced a decree of forfeiture and deposition.

In Scotland, Mary, Queen of Scots, was forced to abdicate in favour of her one-year-old son, James VI.

Today, because the title to the Crown depends upon statute, particularly the Act of Settlement 1701, a royal abdication can only be effected by an Act of Parliament; under the terms of the Statute of Westminster 1931, such an act must be agreed by the parliaments of all extant signatories of the Statute. To give legal effect to the abdication of King Edward VIII, His Majesty's Declaration of Abdication Act 1936 was passed.

In Medieval Japan abdication was used very often, and in fact occurred more often than death on the throne. In those days, most executive authority resided in the hands of regents (see Sesshō and Kampaku), and the emperor's chief task was priestly, containing so many repetitive rituals that it was deemed the incumbent Emperor deserved pampered retirement as an honored retired emperor after a service of around ten years. A tradition developed that an emperor should accede to the throne relatively young. The high-priestly duties were deemed possible for a walking child; and a dynast who had passed his toddler years was regarded suitable and old enough; reaching the age of legal majority was not a requirement. Thus, many Japanese emperors have acceded as children, some only 6 or 8 years old. Childhood apparently helped the monarch to endure tedious duties and to tolerate subjugation to political power-brokers, as well as sometimes to cloak the truly powerful members of the imperial dynasty. Almost all Japanese empresses and dozens of emperors abdicated and lived the rest of their lives in pampered retirement, wielding influence behind the scenes, often with more power than they had had while on the throne (see Cloistered rule). Several emperors abdicated while still in their teens. These traditions show in Japanese folklore, theater, literature and other forms of culture, where the emperor is usually described or depicted as an adolescent.

Before the Meiji Restoration, Japan had eleven reigning empresses, who were usually crowned as a sort of a "stop gap" measure when a suitable male was not available or some imperial branches were in rivalry so that a compromise was needed. Over half of Japanese empresses abdicated once a suitable male descendant was considered to be old enough to rule.

Since the Meiji Restoration and the subsequent reorganization of imperial succession, no emperor has abdicated and all have died on the throne. There is also no provision for abdication in the Imperial Household Law, the Meiji Constitution, or the current 1947 Constitution of Japan.

After the defeat of Japan in World War II, many members of the imperial family, such as Princes Chichibu, Takamatsu and Higashikuni, pressured then Emperor Hirohito to abdicate so that one of the Princes could serve as regent until Crown Prince Akihito came of age.[1] On February 27, 1946, the emperor's youngest brother, Prince Mikasa (Takahito), even stood up in the privy council and indirectly urged the emperor to step down and accept responsibility for Japan's defeat. U.S. General Douglas MacArthur insisted that Emperor Hirohito retain the throne. MacArthur saw the emperor as a symbol of the continuity and cohesion of the Japanese people.

In certain cultures, the abdication of a monarch was seen as a profound and shocking abandonment of royal duty. As a result, abdications usually only occurred in the most extreme circumstances of political turmoil or violence. In the United Kingdom and the Commonwealth realms it is still seen in a particularly grave light, due to the abdication crisis of Edward VIII.[citation needed]

In recent decades, the monarchs or leaders of the Netherlands, Belgium, Luxembourg, the Vatican City state, Qatar, Cambodia, and Bhutan have abdicated as a result of old age. In the Netherlands, the last three monarchs Wilhelmina, Juliana, and Beatrix have all abdicated. In all three instances, this was done to pass the throne to the heir sooner.

In June 2014, King Juan Carlos of Spain announced his intent to abdicate in favor of his son, Felipe.[2] Felipe took the throne as King Felipe VI on June 19.[3] 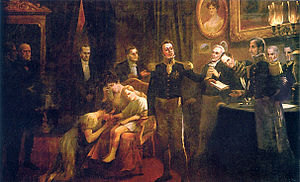 Dom Pedro I, ruler of the Empire of Brazil, delivers his abdication letter on 7 April 1831