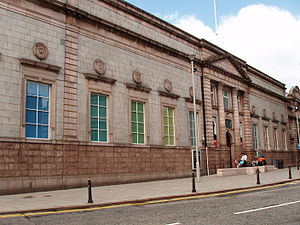 Aberdeen Art Gallery is the main visual arts exhibition space in the city of Aberdeen, Scotland. It was founded in 1884, in a building designed by Alexander Marshall Mackenzie.[1] In 1900 it received the art collection of Alexander Macdonald, a local granite merchant.[2]

The permanent collection including works by 18th-century British artists including Henry Raeburn, William Hogarth, Allan Ramsay and Joshua Reynolds, and 20th-century artists including Paul Nash and Francis Bacon,[1] the Post-Impressionists and the Scottish Colourists as well as applied arts and crafts.

The central hall is supported by granite columns in a variety of colours, derived from different quarries in the local area and far beyond.

At the western end of the building, with a room inside and a monument outside, is a major war memorial.