i/ˌæbərˈdaʊər/; Scots: Aiberdourcode: sco is deprecated ,[2] Scottish Gaelic: Obar Dobhair) is a scenic and historic village on the south coast of Fife, Scotland. It is on the north shore of the Firth of Forth, looking south to the island of Inchcolm and its Abbey, and to Leith and Edinburgh beyond. According to the 2011 census, the town has a population of 1,633.[1]

The village's winding High Street lies a little inland from the coast. Narrow lanes run off it, providing access to the more hidden parts of the village and the shoreline itself. The village nestles between the bigger coastal towns of Burntisland to the east and Dalgety Bay to the west.

The origins of the village lie with its harbour, where the Dour Burn enters the River Forth. The place-name itself is Pictish, implying an origin in the Dark Ages: aber 'confluence'. The -dour element, referring to the Burn, means simply 'water' (archaic dobur), and is unconnected to the Scots/English 'dour'. For much of its history Aberdour was two villages, Wester Aberdour and Easter Aberdour, on either side of the Dour Burn. Although this distinction was blurred by the 19th century arrival of the railway.

In the 18th century Aberdour's harbour was improved by the addition of a stone pier to help handle the coal traffic from nearby collieries. However, in the 1850s the traffic changed dramatically, and Aberdour Harbour became a popular destination for pleasure steamers from Leith. This in turn led to the building of a deeper water pier a little around the bay at Hawkcraig, and to the development of hotels and many of the other services still on view today in the village.

The railway came to Aberdour in 1890, with the building of the line east from the newly opened Forth Bridge. The station has won many "best kept station" awards. The half an hour journey to the centre of Edinburgh helped build on the existing popularity of the village, though it put the steamers out of business. The main result was a growth in the building of large and attractive houses, especially down the hill from Wester Aberdour to the West Sands. Ticket inspectors on the train line through Aberdour were known for their sing song refrain: "Half an hour, Half an hour, Half an hour to Aberdour - tickets please." 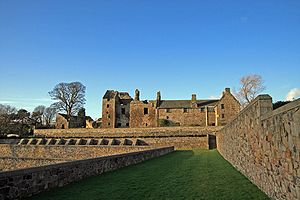 Virtually between the two former settlements, though actually part of Easter Aberdour, lies Aberdour Castle. This started life as a modest hall house on a site overlooking the Dour Burn in the 13th century. The oldest part of the present semi-ruin constitutes one of the earliest surviving stone castles in mainland Scotland. Over the next four hundred years the Castle was successively developed according to contemporary architectural ideas. Notable are the parts, still largely roofed, built by the Earls of Morton, with refined Renaissance detail, in the second half of the 16th century. A fire in the late 17th century was followed by some repairs, but in 1725 the family purchased 17th century Aberdour House, on the west side of the burn and in Wester Aberdour, and the medieval Castle was allowed to fall into relative decay. Aberdour Castle is now in the care of Historic Scotland and open to the public (entrance charge). After a period of dereliction Aberdour House was developed for residential use in the early 1990s. 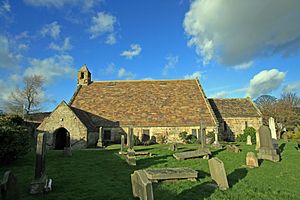 Neighbouring St Fillan's Church is one of the best-preserved medieval parish churches in Scotland, dating largely to the 12th century. A south arcade was added to the nave in the early 16th century (open in summer). The A921, the main road along the south coast of Fife, leads down the High Street of Wester Aberdour, before kinking sharply left to cross the railway line, then right again to progress through Easter Aberdour's Main Street.

Wester Aberdour has the more 'olde worlde' feel of the two, with the narrower through road more closely hemmed in by shops and hotels. A number of vernacular buildings of the 17th-early 19th centuries add to the historic scene. Close to the railway bridge, three lanes continue eastwards, presumably once the route of the original High Street before the arrival of the railway. One now leads to Aberdour railway station, a beautifully kept and cared for example of a traditional station, in keeping with its role of transporting at least a quarter of the village's working population to their work each day.

A second lane leads alongside the railway line to Aberdour Castle, while a third leads to the restored Aberdour House. A little further west, a narrow road closely lined with high walls, Shore Road, leads down to the West Sands and the Harbour. For many this area is the highlight of any visit to Aberdour; parking at the foot of Shore Road is usually at a premium.

Another road leads coastwards from Easter Aberdour. Hawkcraig Road leads past St Fillan's Church and through Silversand Park, home to Aberdour Shinty Club, en route to the much better parking area on Hawkcraig. This was formerly a sandstone quarry and then used as the council refuse tip before becoming a carpark, part of the overgrown and rocky bluff separating Aberdour's two bays. From here is it a short walk to the Silver Sands, Aberdour's busiest and most popular beach. On the west side of Hawkcraig Point there is a short concrete jetty that was used as part of the development of radio controlled torpedoes during World War One. The foundations of the Radio Hut can still be seen in the lea of the hill.

The Aberdour obelisk was built by Lord Morton on his departure from the village to relocate to a large home in Edinburgh, it was built so he could see his former hometown from his new house when he looked through binoculars - it stands in a cowfield between the castle and the beach.

The yearly festival runs from the last week in July for a week, running into early August. It is now in its 32nd year and is most notable for its marquee on the silver sands playing fields. The festival hosts a number of children's, cultural and local events. Acts that have performed at Aberdour festival have been Yard Of Ale, Percy & The Peanuts, Swings & Roundabouts, Capercaillie, Boys of the Lough, Eddi Reader and The Fence Collective's Three Craws

The Donkey brae run is held on the first Sunday of the festival and is popular nationwide, with a 7-mile race, 2-mile run and a 1-mile run for children.

Aberdour was a 2005 finalist in the prestigious "Beautiful Scotland in Bloom" awards. It was nominated for "Best Coastal Resort" in Scotland along with St Andrews in Fife, North Berwick in East Lothian, and Rothesay in Argyll and Bute. In 2014 Aberdour was voted Best Coastal Village in Fife and Best Small Coastal Village in Scotland. It also received a Gold Award in Beautiful Fife and Beautiful Scotland.

Aberdour has two beaches - the Silver Sands, and the Black Sands.

The Silver Sands are located on the East side of the village, and are one of Scotland's seven "Blue flag" awarded beaches, which denotes an exemplary standard of cleanliness, facilities, safety, environmental education and management. New facilities are currently under construction by Fife Council, which will much improve the beach throughout the year.

The Black Sands, as the contrasting name would suggest, have a rockier and darker sand, and are also popular with visitors exploring the rock caves and fascinating sea life. During the summer months (April–September), dogs are banned from the Silver Sands but they are allowed all year round at the Black Sands. The two beaches are linked by part of the Fife Coastal Path which also takes you past the harbour and the Hawkcraig - a popular rock climbing location.[4]

Silver Sands is becoming more popular with open water swimmers, who swim daily in the sea, both as a leisure pursuit, and as training for open water competition. The bay provides safety from the currents, although the adventurous swim round to the harbour.

Several scenes of Richard Jobson's 2003 movie "16 Years of Alcohol" were filmed at the Black Sands in Aberdour.

The island of Inchcolm, or Island (Gaelic innis) of Columba, a quarter of a mile from the shore, forms part of the parish of Aberdour. Its name implies associations dating back to the time of Columba and, although undocumented before the 12th century, it may have served the monks of the Columban family as an 'Iona of the east' from early times.

During the First and Second World Wars, Inchcolm was occupied by the army as part of the defences of the Firth of Forth. There are extensive remains of gun emplacements, barracks, etc. from these periods.

The island is notable for its wildlife, especially seabirds and seals. These draw many visitors in summer, along with the remains of the historic Abbey, and is a popular setting for weddings.

Notable past and present residents of the town include: