Aberystwyth University (Welsh: Prifysgol Aberystwyth) is a public research university in Aberystwyth, Wales. Aberystwyth was a founding member institution of the former federal University of Wales. The university has over 8,000 students studying across 3 academic faculties and 17 departments. 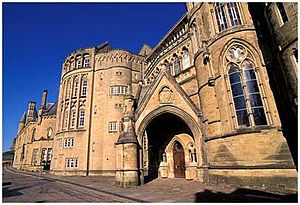 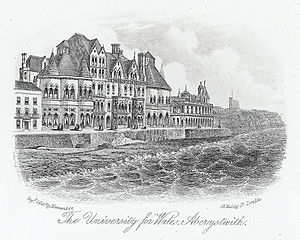 In the middle of the 19th century, eminent Welsh people were advocating the establishment of a university in the Principality, one of these, Thomas Nicholas, whose book Middle and High Class Schools, and University Education for Wales (1863) is said to have "exerted great influence on educated Welshmen".[6]

Funded through public and private subscriptions, and with five regional committees (London, Manchester, Liverpool, North and South Wales) guaranteeing funds for the first three years' running costs, the university opened in October 1872 with 26 students. Thomas Charles Edwards was the Principal. In October 1875, chapels in Wales raised the next tranche of funds from over 70,000 contributors.[7] Until 1893, when the college joined the University of Wales as a founder member, students applying to Aberystwyth sat the University of London's entrance exams.[8] Women were admitted in 1884.

In 1885, a fire damaged what is now known as the Old College, Aberystwyth, and in 1897 the first 14 acres of what would become the main Penglais campus were purchased.[9] Incorporated by Royal Charter in 1893, the university installed the Prince of Wales as Chancellor in 1896, the same year it awarded an honorary degree to the British Prime Minister William Gladstone.

The university's coat of arms dates from the 1880s. The shield features two red dragons to symbolise Wales, and an open book to symbolise learning. The crest, an eagle or phoenix above a flaming tower, may signify the college's rebirth after the 1885 fire.[10] The motto is Nid Byd, Byd Heb Wybodaeth (a world without knowledge is no world at all).

In the early 1900s the university added courses that included Law, Applied Mathematics, Pure Mathematics, and Botany. The Department for International Politics, which Aberystwyth says is the oldest such department in the world, was founded in 1919.[11] By 1977, the university's staff included eight Fellows of the Royal Society, such as Gwendolen Rees, the first Welsh woman to be elected an FRS.

In 2011, the university appointed a new vice chancellor[12] under whom the academic departments were restructured as larger subject-themed institutes.

The university's academic departments, as well as the Arts Centre, International English Centre, and Music Centre are organised in three faculties:

The institute is located in two areas; one at the main teaching Penglais campus and another rural research hub at the Gogerddan campus.[14] 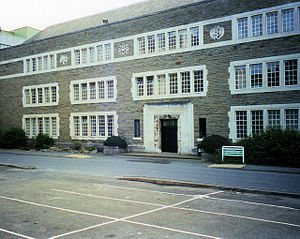 Cledwyn Building, former home of the School of Economics 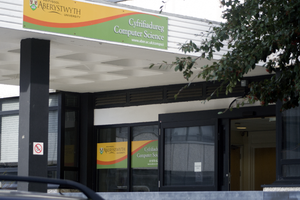 AberMUD, the first popular internet-based MUD, was written in the department by then-student Alan Cox. Jan Pinkava, another graduate, won an Oscar for his short animated film Geri's Game. Students in the department were also involved in the creation of the award-winning service robot librarian named Hugh (robot)[16] and Kar-go, the autonomous delivery vehicle.[17]

Department of Geography and Earth Sciences

The Department of Geography and Earth Sciences (IGES) was formed, in 1989, from the former Departments of Geography (established in 1918) and Geology. It houses the E. G. Bowen map library, containing 80,000 maps and 500 atlases.[18]

The College of Librarianship Wales (CLW) was established at Llanbadarn Fawr in 1964, in response to a recommendation for the training of bilingual librarians that was made in the Bourdillon Report on Standards of public library service in England (HMSO, 1962). The college grew rapidly, developing close links to the Welsh speaking and professional communities, acquiring an international reputation and pioneering flexible and distance learning courses. It claimed to be Europe's largest institution for training librarians.[19] The independent college merged with the university (in August 1989) and the department moved to the Penglais campus a quarter of a century later. Following the merger, the new department took over responsibility for existing offerings in archives administration and modern records management. 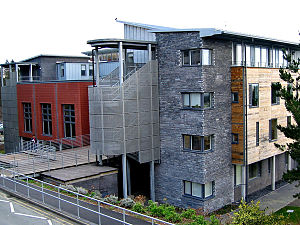 The Department of International Politics is the oldest of its kind in the world. It was founded, shortly after World War I (in 1919), with the stated purpose of furthering political understanding of the world in the hope of avoiding such conflicts in the future. This goal led to the creation of the Woodrow Wilson Chair of International Politics, with Wilson having played a significant role in its creation.[20] The department has over 700 students from 40 countries studying at undergraduate, masters and PhD levels. It achieved a 95% score for student satisfaction in the 2016 National Student Survey, placing it as the highest-ranking politics department in Wales and within the UK's top ten.[21]

Department of Law and Criminology

The Department of Law and Criminology (founded in 1901) is housed in the Hugh Owen Building on the Penglais campus, and includes the Centre for Welsh Legal Affairs, a specialist research centre. All academic staff are engaged in research, and the International Journal of Biosciences and the Law and the Cambrian Law Review are edited in the department. In 2013, the department joined the Department of Information Studies and the School of Management and Business at a new campus at Llanbadarn Fawr, as part of a newly created Institute of Management, Law and Information Studies. As of September 2018, the department has since relocated back to the Hugh Owen Building, based in the Penglais campus, and its name changed from Aberystwyth Law School to the Department of Law and Criminology.[22]

The Guardian University Guide 2018 currently ranks Law Department at 69th in the UK,[23] and "The Times" Higher Education Guide ranks it as 300th globally.[24]

Aberystwyth has taught modern languages since 1874. French, German, Italian and Spanish courses are taught at both beginners' and advanced levels, in a research-active academic environment. One of its research projects is the Anglo-Norman Dictionary,[25] based in Aberystwyth since 2001 and available online since 2005.

Physics was first taught at Aberystwyth as part of Natural Philosophy, Astronomy, and Mathematics under N. R. Grimley, soon after the foundation of the University College.[26] It became a department in 1877, under the leadership of F. W. Rudler.[26] The department was located in the south wing of what is now the Old College,[26] but later relocated to the Physics Building on the Penglais Campus. The first chair in Physics was offered to D. E. Jones in 1885.[26] Prior to World War I, much of the early research in the department was undertaken in Germany. Early research in the 1900s was concerned with electrical conductivity and quantum theory, later moving into thermal conductivity and acoustics.[26] In 1931, the department hosted the Faraday Centenary Exhibition.[26] E. J. Williams was appointed Chair of Physics in 1938 where he continued his research into sub-atomic particles using a cloud chamber.[27] Following World War II, research was concerned with mechanical and nuclear physics, later moving into the fields of air density, experimental rocket launching equipment, and radar.[26]

In 2007, Aberystwyth established the subject as a "Centre for Applied Psychology" within the Department of International Politics. By 2011, Psychology had moved into their current premises in Penbryn 5 on the Penglais Campus. The department is home to over 300 undergraduate students – with degrees accredited by the British Psychological Society. 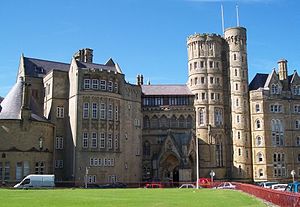 The main campus of the university is situated on Penglais Hill, overlooking the town of Aberystwyth and Cardigan Bay, and comprises most of the university buildings, Arts Centre, Students' Union, and many of the student residences. Just below Penglais Campus is the National Library of Wales, one of Britain's five legal deposit libraries. The landscaping of the Penglais Campus is historically significant and is listed.[9] The CADW listing states,

"The landscaping of the University of Wales, Aberystwyth campuses, particularly the earlier Penglais campus, is of exceptional historic interest as one of the most important modern landscaping schemes in Wales...One section of the Penglais campus was designed by the well known landscape architect Brenda Colvin and is one of the very few of her schemes to have survived. A number of women have played a key role in the development and planting of the whole site."

The Llanbadarn Centre is located approximately one mile to the east of the Penglais Campus, near Llanbadarn Fawr, overlooking the town and Cardigan Bay to the west, with the backdrop of the Cambrian Mountains to the east. Llanbadarn Centre hosted Aberystwyth Law School and Aberystwyth Business School, which together formed the Institute of Business and Law. The Department of Information Studies is also based there. Additionally, the Llanbadarn Campus is the site of the Aberystwyth branch of Coleg Ceredigion (a further education college, and not part of the university).

At Gogerddan, on the outskirts of town is located the university's major centre for research in land based sciences and the main centre for the Institute of Biological, Environmental and Rural Science.

The site of the original university is the Old College, currently the subject of the "New Life for Old College" project which aims to transform it into an integrated centre of heritage, culture, learning and knowledge exchange. The university opened an international campus in Mauritius in 2016 operating as Aberystwyth University (Mauritian Branch Campus) and registered with the Tertiary Education Commission of Mauritius, but closed it to new enrolments two years later due to low enrolment numbers.[28]

Most of the student residences are on campus, with the rest in walking distance of the campus and Aberystwyth town centre. Accommodation ranges from "traditional" catered residences to en-suite self-catered accommodation, and from budget rooms to more luxurious studio apartments. All have wired access to the university's computer network and a support network of residential tutors.

The university also owns several houses, such as Penglais Farmhouse (Adjacent to Pentre Jane Morgan) and flats in Waun Fawr, which are let on an Assured Shorthold Tenure to students with families. Disabled access rooms are available within the existing student village.

Aberystwyth University is placed in the UK's top 50 universities in the main national rankings. It is ranked 48th for 132 UK university rankings in The Times/Sunday Times Good University Guide for 2019[44] and the first university to be given the prestigious award "University of the year for teaching quality" for two consecutive years (2018 and 2019).[4]

The Times Higher Education World University Rankings placed it in the 301—350 group for 800 university rankings, compared with 351—400 the previous year,[45] and the QS World University Rankings placed it at the 432nd position for 2019, compared with 481—490 of the previous year.[46] In 2015, UK employers from "predominantly business, IT and engineering sectors" listed Aberystwyth equal 49th in their 62-place employability rankings for UK graduates, according to a Times Higher Education report.[47]

Aberystwyth University was rated in the top ten of UK higher education institutions for overall student satisfaction in the 2016 National Student Survey (NSS).[48]

Aberystwyth University has been awarded the Silver Award under the Corporate Health Standard (CHS), the quality mark for workplace health promotion run by Welsh Government.[50]

The university has been awarded an Athena SWAN Charter Award, recognising commitment to advancing women's careers in science, technology, engineering, maths and medicine (STEMM) in higher education and research.[51]

Following the university's initiatives to address sustainability,[55] it received an EcoCampus[56] Silver Phase award in October 2014.

In October 2015, the university's Penglais Campus became the first University campus in Wales to achieve the Green Flag Award.[57] The Green Flag Award is a UK-wide partnership, delivered in Wales by Keep Wales Tidy with support from Natural Resources Wales, and is the mark of a high quality park or green space.

In 2013, the University and College Union alleged bullying behaviour by Aberystwyth University managers, and said staff were fearful for their jobs. University president Sir Emyr Jones Parry said in a BBC radio interview, "I don't believe the views set out are representative and I don't recognise the picture." He also said, "Due process is rigorously applied in Aberystwyth." Economist John Cable resigned his emeritus professorship, describing the university's management as "disproportionate, aggressive and confrontational". The singer Peter Karrie resigned his honorary fellowship in protest, he said, at the apparent determination to "ruin one of the finest arts centres in the country", and because he was "unable to support any regime that can treat their staff in such a cruel and appalling manner."[58]