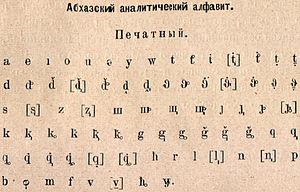 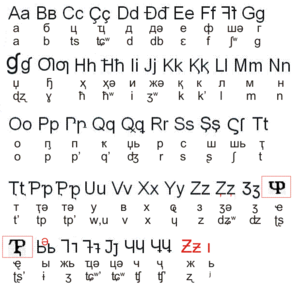 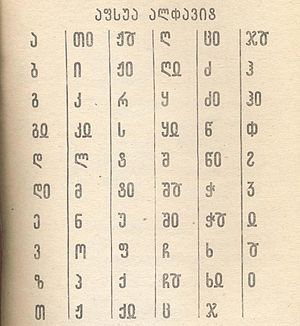 Abkhaz alphabet which was based on Georgian script and used in 1938-1953 years.

The Abkhaz alphabet uses letters from the Cyrillic script for the Abkhaz language which consists of 62 letters.

Abkhaz did not become a written language until the 19th century. Up until then, Abkhazians, especially princes, had been using Greek (up to c. 9th century), Georgian (9–19th centuries), and partially Turkish (18th century) languages.[2] The Abkhaz word for alphabet is анбан (anban), which was borrowed from Georgian ანბანი (anbani).

The first dedicated Abkhaz alphabet was created in 1862 by the Russian general Peter von Uslar. It had 37 letters and was based on the Cyrillic script. In 1909, it was expanded to 55 letters by Aleksey Chochua to adjust to the extensive consonantal inventory of Abkhaz.

In 1926, during the korenizatsiya policy in the Soviet Union, the Cyrillic alphabet was replaced by a Latin alphabet devised by Nikolay Marr. It featured 76 letters and was called the "Abkhaz analytical alphabet". In 1928, this was replaced by another Latin alphabet. (See illustration at right.) From 1938 to 1954 the Abkhaz language was written in the Georgian alphabet.

Since 1954, the Abkhaz language has been written in a new 62-letter Cyrillic alphabet (see chart below). Of these, 38 are graphically distinct; the rest are digraphs with ⟨ь⟩ and ⟨ә⟩ which indicate palatalization and labialization, respectively. Unusually, the Cyrillic plosive letters К П Т represent ejective consonants; the non-ejectives (pulmonic consonants) are derived from these by means of a descender at the bottom of the letter. In the case of the affricates, however, the plain letter are pulmonic, and the derived letters ejective.

The modern Abkhaz orthography gives preference to the letters Г П with descender (Ӷ Ԥ) instead of hook (Ҕ Ҧ). The characters Ԥ and ԥ are encoded in Unicode since version 5.2.[3]