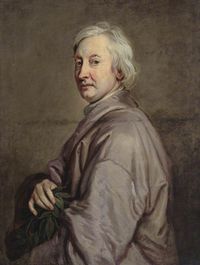 Absalom and Achitophel is a landmark poetic political satire by John Dryden (1631–1700). The poem exists in two parts. The first part, of 1681, is undoubtedly by Dryden. The second part, of 1682, was written by another hand, most likely Nahum Tate, except for a few passages—including attacks on Thomas Shadwell and Elkanah Settle, expressed as Og and Doeg—that Dryden wrote himself.

The poem is an allegory that uses the story of the rebellion of Absalom against King David as the basis for discussion of the background to the Popish Plot (1678), the Exclusion Crisis (1679-1681), and the Monmouth Rebellion (1685).

While Absalom and Achitophel has been read as a satire for over 300 years there is still some speculation as to whether that title is accurate. "It is, for example, a satire, except for the failed ending; or a satire except for 'serious' defenses of David and Charles; or a satire except for the tribute to Barzillai, the Duke of Ormonde, and accompanying elegy for his son, the Earl of Ossory; or in short, a satire, except for the parts that aren’t".[1] This problem lies with the problem of not recognizing the extent to which Dryden’s satire "claims to create a self-contained hermeneutic, one that gestures toward and redirects other interpretive possibilities in order to dismiss them.” [2] It is for this reason that Dryden's work has been labeled as an “epic, epyllion, epic episode, satire, epic satire, Varronian satire, formal verse satire, classical oration, Jonsonian masque, political pamphlet, painting, biblical allegory, narrative, drama, chronology, music (fugal fantasia), typology, folklore, 'Poem,' and varying combinations of some of these.”[3]

The story of Absalom's revolt is told in the Second Book of Samuel in the Old Testament of the Bible (chapters 14 to 18). Absalom rebels against his father King David. The beautiful Absalom is distinguished by extraordinarily abundant hair, which is probably meant to symbolise his pride (2 Sam. 14:26). When David's renowned advisor, Achitophel (Achitophel in the Vulgate) joins Absalom's rebellion, another advisor, Hushai, plots with David to pretend to defect and give Absalom advice that plays into David's hands. The result was that Absalom takes the advice of the double agent Hushai over the good advice of Achitophel, who realising that the rebellion is doomed to failure, goes home and hangs himself. Absalom is killed (against David's explicit commands) after getting caught by his hair in the thick branches of a great oak: "His head caught fast in the oak, and he was left hanging between heaven and earth, while the mule that was under him went on" (NRSV 2 Sam. 18:9). The death of his son, Absalom, causes David enormous personal grief. The title of Faulkner's novel Absalom, Absalom! is taken from David's mourning in 2 Sam. 18:33 or 19:4. There is a second parabolic allegory that begins in lines 425 to 426, however, the ideas of this allegory can be seen throughout the poem. This second parable is that of the Prodigal Son. A second son returning for his birthright works well for the problems of ascension. This parable can be found in Luke 15:11-32; it tells the story of a son who asked for his birthright early, lost it, and returned to his father who then took pity on him and shared with him the rest of his fortune. This fatherly indulgence is contrary to that of Achitophel to David. Dryden uses the similarities and difference is the stories to play off each other and expose the problems with ascension.

In 1681 in England, Charles II was in advanced years. He had had a number of mistresses and produced a number of illegitimate children. One of these was James Scott, the Duke of Monmouth, who was very popular, both for his personal charisma and his fervor for the Protestant cause. Charles had no legitimate heirs, and his brother, the future James II of England was openly a Roman Catholic.[4] When Charles's health suffered, there was a panic in the House of Commons over the potential for the nation being ruled by a Roman Catholic king.[5] The Earl of Shaftesbury had sponsored and advocated the Exclusion Bill, which would prevent James II from succeeding to the throne, but this bill was blocked by the House of Lords on two occasions. In the Spring of 1681, at the Oxford Parliament, Shaftesbury appealed to Charles II to legitimate Monmouth. Monmouth was caught preparing to rebel and seek the throne, and Shaftesbury was suspected of fostering this rebellion. The poem was written, possibly at Charles's behest, and published in early November 1681.[6] On 24 November 1681, Shaftesbury was seized and charged with high treason. A trial before a jury picked by Whig sheriffs acquitted him.[7]

Later, after the death of his father and unwilling to see his uncle James II become King, the Duke of Monmouth executed his plans and went into full revolt. The Monmouth Rebellion was put down, and in 1685 the Duke was executed.[8]

Dryden's poem tells the story of the first foment by making Monmouth into Absalom, the beloved boy, Charles into David (who also had some philandering), and Shaftesbury into Achitophel. It paints Buckingham, an old enemy of Dryden's (see The Rehearsal for one example), into Zimri, the unfaithful servant. The poem places most of the blame for the rebellion on Shaftesbury and makes Charles a very reluctant and loving man who has to be king before father. The poem also refers to some of the Popish Plot furore.[9]

There are many different ways of understanding Dryden’s poem Absalom and Achitophel. The most common reading compares “the connections between fatherhood and kingship”.[10] Through biblical allusions Dryden connects ancient fatherhood with current to not only show the precedent that was set but also to show how it connects with a royal’s responsibilities. Dryden uses the fatherly indulgence of David (lines 31-33) to explore the legitimacy of the Achitophel’s succession. Dryden uses an old story, The Prodigal Son, to create a clear picture of how self-indulgent love creates unfair conflict.[11] Throughout the poem the relationship of fatherhood and kingship is united. Another way of reading Dryden’s poem is through a “mother plot”.[12] Susan Greenfield proposes that the mentions of maternity and women are an important part of the poems royalist resolution. In this reading the blame is transferred to the females saying that only the female power of life threatens the political order and should be hindered.[13] It is due to female desires and a female’s ability to create life that the whole mess is created.

Within the renaissance philosophers and writers were interested in the idea of superiority of bastards. It was a common idea at that time that bastards were better than their legitimate counterparts. Lines 19 and twenty explore this idea when they say “whether, inspired by some diviner lust,/his father got him with greater gusts”. It was thought that the greater passion and desire that went into making bastards made them better. An inclusion of this idea in a satirical piece could have many implications. Heidi Kelchner proposes that “we should consider Dryden's reference to the heated manner in which Absalom was conceived-used ironically as part of a mock panegyric of Absalom”.[14]