From Infogalactic: the planetary knowledge core
Jump to: navigation, search
For other uses, see Absalon (disambiguation).

Absalon or Axel[1] (c. 1128 – 21 March 1201) was a Danish archbishop and statesman, who was the Bishop of Roskilde from 1158 to 1192 and Archbishop of Lund from 1178 until his death. He was the foremost politician and churchfather of Denmark in the second half of the 12th century, and was the closest advisor of King Valdemar I of Denmark. He was a key figure in the Danish policies of territorial expansion in the Baltic Sea, Europeanization in close relationship with the Holy See, and reform in the relation between the Church and the public. He combined the ideals of Gregorian Reform ideals with loyal support of a strong monarchical power.

Absalon was born into the powerful Hvide clan, and owned great land possessions. He endowed several church institutions, most prominently his family's Sorø Abbey. He was granted lands by the crown, and built the first fortification of the city that evolved into modern-day Copenhagen. His titles were passed on to his nephews Anders Sunesen and Peder Sunesen. He died in 1201, and was interred at Sorø Abbey.

Absalon was born around 1128 near Sorø, Zealand.[1] Due to a name which is unusual in Denmark, it is speculated that he was christened on the Danish "Absalon" name day, October 30.[2] He was the son of Asser Rig, a magnate of the Hvide clan from Fjenneslev on Zealand.[3] He was also a kinsman of Archbishop Eskil of Lund.[2] He grew up at the castle of his father, and was brought up alongside his older brother Esbern Snare and the young prince Valdemar, who later became King Valdemar I of Denmark.[4] During the civil war following the death of Eric III of Denmark in 1146, Absalon travelled abroad to study theology in Paris, while Esbern fought for Valdemar's ascension to the throne. At Paris, he was influenced by the Gregorian Reform ideals of churchly independence from Monarchical rule.[5] He also befriended the canon William of Æbelholt at the Abbey of St Genevieve, whom he later made abbott of Eskilsø Abbey.[2]

Absalon first appears in Saxo Grammaticus's contemporary chronicle Gesta Danorum at the end of the civil war, at the brokering of the peace agreement between Sweyn III and Valdemar at St. Alban's Priory, Odense.[2] He was a guest at following Roskilde banquet given in 1157 by Sweyn to his rivals Canute V and Valdemar. Both Absalon and Valdemar narrowly escaped assassination at the hands of Sweyn on this occasion, and escaped to Jutland, whither Sweyn followed them.[3] Absalon probably did not take part in the following battle of Grathe Heath in 1157, in which Sweyn was defeated and slain and led to Valdemar ascending the Danish throne. On Good Friday 1158, bishop Asser of Roskilde died, and Absalon was eventually elected bishop of Roskilde on Zealand with the help of Valdemar,[2] as the king's reward for the Hvide family support.[6]

Absalon was a close counsellor of Valdemar, and chief promoter of the Danish crusades against the Wends.[4] During the Danish civil war, Denmark had been open to coastal raids by the Wends.[6] It was Absalon's intention to clear the Baltic Sea of the Wendish pirates who inhabited its southern littoral zone which was later called Pomerania. The pirates had raided the Danish coasts during the civil war of Sweyn III, Canute V, and Valdemar, to the point where at the accession of Valdemar one-third of Denmark lay wasted and depopulated.[3] Absalon formed a guardian fleet, built coastal defenses, and led several campaigns against the Wends.[6] He even advocated forgiving the earlier enemies of Valdemar, which helped stabilize Denmark internally.[2] 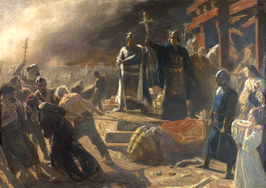 The first expedition against the Wends that was conducted by Absalon in person, set out in 1160.[3] These expeditions were successful, but brought no lasting victories.[2] What started out as mere retribution, eventually evolved into full-fledged campaigns of expansion with religious motives.[6] In 1164 began twenty years of crusades against the Wends, sometimes with the help of German duke Henry the Lion, sometimes in opposition to him.[2]

In 1168 the chief Wendish fortress at Arkona in Rügen, containing the sanctuary of their god Svantevit, was conquered. The Wends agreed to accept Danish suzerainty and the Christian religion at the same time. From Arkona, Absalon proceeded by sea to Charenza, in the midst of Rügen, the political capital of the Wends and an all but impregnable stronghold. But the unexpected fall of Arkona had terrified the garrison, which surrendered unconditionally at the first appearance of the Danish ships. Absalon, with only Bishop Sweyn of Aarhus, and twelve "housecarls" thereupon disembarked, passed between a double row of Wendish warriors, 6000 strong, along the narrow path winding among the morasses, to the gates of the fortress, and, proceeding to the temple of the seven-headed god Rugievit, caused the idol to be hewn down, dragged forth and burnt. The whole population of Garz was then baptized, and Absalon laid the foundations of twelve churches in the isle of Rügen.[3] Rügen was then subjected to Absalon's Bishopric of Roskilde.[6]

The destruction of this chief sally-port of the Wendish pirates enabled Absalon considerably to reduce the Danish fleet. But he continued to keep a watchful eye over the Baltic, and in 1170 destroyed another pirate stronghold, farther eastward, at Dziwnów on the isle of Wolin. Absalon's last military exploit came in 1184, off Stralsund at Whitsun, when he soundly defeated a Pomeranian fleet that had attacked Denmark's vassal, Jaromar of Rügen.[3]

Absalon's main political goal was to free Denmark from entanglements with the Holy Roman Empire.[3] Absalon reformed the Danish church organisation to closer match Holy See praxis, and worked to keep Denmark a close ally of the Holy See.[4] However, during the schism between Pope Alexander III and Antipope Victor IV, Absalon stayed loyal to Valdemar even as he joined the Holy Roman Emperor Frederick Barberossa in supporting Victor IV.[6] This caused a split within the Danish church, as it possibly forced Eskil into exile around 1161,[4] despite Abaslon's attempts to keep the Danish church united.[2] It was contrary to Absalon's advice and warnings that Valdemar I rendered fealty to the emperor Frederick Barbarossa at Dole in 1162.[3] When Valdemar returned to Denmark, he was convinced into strengthening the Danevirke fortifications at the German border, with the support of Absalon.[2]

Absalon built churches and monasteries, supporting international religious orders like the Cistercians and Augustinians, founding schools and doing his utmost to promote civilization and enlightenment.[3] In 1162, Absalon transformed the Sorø Abbey of his family from Benedictine to Cistercian, granting it lands from his personal holdings. In 1167, Absalon was granted the land around the city of "Havn" (English: Harbour), and built there a castle in the coastal defense against the Wends.[4] Havn quickly expanded as one of Scandinavia's most important centers of trade, and eventually evolved into modern-day Copenhagen.[2] It was also Absalon who held the first Danish Synod at Lund in 1167.[3] He was also interested in history and culture, and commissioned Saxo Grammaticus to write Gesta Danorum, a comprehensive chronicle of the history of the Danes.[6] In 1171, Absalon issued the "Zealand church law" (Danish: Sjællandske Kirkelov), which reduced the number of Canonical Law offenses for which the church could fine the public, while instituting the tithe payment system. Eventual violation of the law was specified as subject to a secular legal process.[7]

Archbishop Eskil returned from exile in 1167. Eskil agreed on canonizing Valdemar's father Knud Lavard in 1170, with Absalon assisting him at the feast. When Eskil stepped down as Archbishop of Lund in 1177, he chose Absalon as his successor.[6] Absalon initially resisted the new position, as he did not want to lose his power position on Zealand, but complied with Papal orders to do so in 1178.[2] By a unique Papal dispensation, Absalon was allowed to simultaneously maintain his post as Bishop of Roskilde.[4] As the Archbishop of Lund, Absalon utilized ombudsmen from Zealand, demanded unfree labour from the peasantry, and instituted tithes.[6] He was a harsh and effective ruler, who cleared all Orthodox Christian liturgic remnants in favour of Papal standards.[4] A rebellion in the Scanian peasantry forced him to flee to Zealand in 1180, from where he returned and subdued the Scanians with the help of Valdemar.[6]

When Valdemar died in 1182, his son succeeded him as Canute VI, and Absalon served as Canute VI's counsellor.[6] Under Canute VI, Absalon was the chief policymaker in Danish politics.[5] Absalon kept his hostile attitude to the Holy Roman Empire. On the accession of Canute VI in 1182, an imperial ambassador arrived at Roskilde to get the new king to swear fealty to Frederick Barbarossa, but Absalon resolutely withstood him.[3] 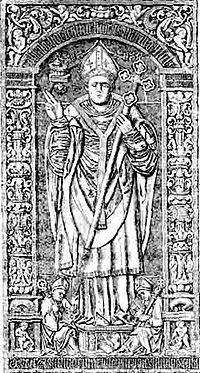 When Absalon retired from military service in 1184 at the age of fifty-seven, he resigned the command of fleets and armies to younger men, like Duke Valdemar, the later king Valdemar II. He instead confined himself to the administration of the Danish empire.[2] In 1192, Absalon made his nephew Peder Sunesen his successor as Bishop of Roskilde, while his other nephew Anders Sunesen was named the chancellor of Canute VI.[6] Absalon died at Sorø Abbey on March 21, 1201, 73 years old, with his last will granting his personal holdings to the Abbey, apart from Fjenneslev which went to Esbern Snarre. He had already given Copenhagen to the Bishopric of Roskilde.[2] Absalon was interred at Sorø Abbey,[6] and was succeeded as Archbishop of Lund by Anders Sunesen.[4]

Saxo Grammaticus' Gesta Danorum was not finished until after the death of Absalon,[4] but Absalon was one of the chief heroic figures of the chronicle, which was to be the main source of knowledge about early Danish history.[6] Absalon left a legacy as the foremost politician and churchfather of Denmark in the 12th century.[4] Absalon was equally great as churchman, statesman and warrior. His policy of expansion was to give Denmark the dominion of the Baltic for three generations. That he enjoyed warfare there can be no doubt; yet he was not like the ordinary fighting bishops of the Middle Ages, whose sole indication of their religious role was to avoid the shedding of blood by using a mace in battle instead of a sword. Absalon never neglected his ecclesiastical duties.[3]

In the 2000s, "Absalon" was adopted as the name for a class of Royal Danish Navy vessels, and the lead vessel of the class. HDMS Absalon (L16) and Esbern Snare (L17) were launched and commissioned by Denmark in 2004 and 2005.[8][9] In December 2008, HDMS Absalon was involved in the rescue of putative Somali pirates 90 miles off Yemen in the Gulf of Aden. The craft from Somalia was reported to hold rocket-propelled grenades and AK-47 assault rifles, and to have been adrift for several days. Also per the report, the Absalon took the sailors and weapons aboard, sunk the craft, and turned the sailors over to the Yemen coast guard. The Absalon, according to The New York Times report, "was deployed in the Gulf of Aden [in] September ['08] as part of an international effort to curb piracy," [10] part of Combined Task Force 150.