Abū al-Qāsim Khalaf ibn al-‘Abbās az-Zahrāwī (936–1013), (Arabic: أبو القاسم خلف بن العباس الزهراوي‎‎), popularly known as Al-Zahrawi (الزهراوي), Latinised as Abulcasis (from Arabic Abū al-Qāsim), was an Arab Muslim physician and surgeon who lived in Al-Andalus. He is considered the greatest medieval surgeon to have appeared from the Islamic World, and has been described as the father of surgery.[1] His greatest contribution to medicine is the Kitab al-Tasrif, a thirty-volume encyclopedia of medical practices.[2] His pioneering contributions to the field of surgical procedures and instruments had an enormous impact in the East and West well into the modern period, where some of his discoveries are still applied in medicine to this day.[3]

Al-Zahrawi was born in the city El-Zahra, six miles northwest of Córdoba, Andalusia. The nisba (attributive title), Al-Ansari, suggests origin from the Medinian tribe of Al-Ansar.[4]

He lived most of his life in Córdoba. It is also where he studied, taught and practiced medicine and surgery until shortly before his death in about 1013, two years after the sacking of El-Zahra.

Few details remain regarding his life, aside from his published work, due to the destruction of El-Zahra during later Castillian-Andalusian conflicts. His name first appears in the writings of Abu Muhammad bin Hazm (993 – 1064), who listed him among the greatest physicians of Moorish Spain. But we have the first detailed biography of al-Zahrawī from al-Ḥumaydī's Jadhwat al-Muqtabis (On Andalusian Savants), completed six decades after al-Zahrawi's death.

Al-Zahrawi was a court physician to the Andalusian caliph Al-Hakam II. He devoted his entire life and genius to the advancement of medicine as a whole and surgery in particular. His best work was the Kitab al-Tasrif, discussed below.

Al-Zahrawi specialized in curing disease by cauterization. He invented several devices used during surgery, for purposes such as inspection of the interior of the urethra, applying and removing foreign bodies from the throat, inspection of the ear, etc. He is also credited to be the first to describe ectopic pregnancy in 963, in those days a fatal affliction.[3]

Al-Zahrawi was the first to illustrate the various cannulae and the first to treat a wart with an iron tube and caustic metal as a boring instrument. He was also the first to draw hooks with a double tip for use in surgery.[5] 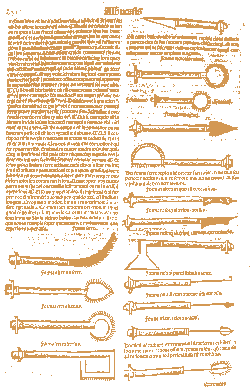 Page from a 1531 Latin translation by Peter Argellata of Al-Zahrawi's treatise on surgical and medical instruments.

Al-Zahrawi's thirty-chapter medical treatise, Kitab al-Tasrif, completed in the year 1000, covered a broad range of medical topics, including dentistry and childbirth, which contained data that had accumulated during a career that spanned almost 50 years of training, teaching and practice. In it he also wrote of the importance of a positive doctor-patient relationship and wrote affectionately of his students, whom he referred to as "my children". He also emphasized the importance of treating patients irrespective of their social status. He encouraged the close observation of individual cases in order to make the most accurate diagnosis and the best possible treatment.

Al-Tasrif was later translated into Latin by Gerard of Cremona in the 12th century, and illustrated. For perhaps five centuries during the European Middle Ages, it was the primary source for European medical knowledge, and served as a reference for doctors and surgeons.

Not always properly credited, Al-Zahrawi's al-Tasrif described both what would later become known as "Kocher's method" for treating a dislocated shoulder and "Walcher position" in obstetrics. Al-Tasrif described how to ligature blood vessels almost 600 years before Ambroise Paré, and was the first recorded book to document several dental devices and explain the hereditary nature of haemophilia.[3] He was also the first to describe a surgical procedure for ligating the temporal artery for migraine, also almost 600 years before Pare recorded that he had ligated his own temporal artery for headache that conforms to current descriptions of migraine.[6] Al-Zahrawi was therefore the first to describe the migraine surgery procedure that is enjoying a revival in the 21st century, spearheaded by Elliot Shevel a South African surgeon.

Al-Zahrawi also described the use of forceps in vaginal deliveries.[7] He introduced over 200 surgical instruments.[8] Many of these instruments were never used before by any previous surgeons.[8]

His use of catgut for internal stitching is still practised in modern surgery. The catgut appears to be the only natural substance capable of dissolving and is acceptable by the body. Al-Zahrawi also invented the forceps for extracting a dead fetus, as illustrated in the Al-Tasrif.[9]

In pharmacy and pharmacology, Al-Zahrawi pioneered the preparation of medicines by sublimation and distillation. His Liber Servitoris is of particular interest, as it provides the reader with recipes and explains how to prepare the "simples" from which were compounded the complex drugs then generally used.[10][11][12]

Al-Zahrawi was the "most frequently cited surgical authority of the Middle Ages".[13]

The chief influence of Albucasis on the medical system of Europe was that his lucidity and method of presentation awakened a prepossession in favour of Arabic literature among the scholars of the West: the methods of Albucasis eclipsed those of Galen and maintained a dominant position in medical Europe for five hundred years, i.e long after it had passed its usefulness. He, however, helped to raise the status of surgery in Christian Europe; in his book on fractures and luxations, he states that ‘this part of surgery has passed into the hands of vulgar and uncultivated minds, for which reason it has fallen into contempt.’ The surgery of Albucasis became firmly grafted on Europe after the time of Guy de Chauliac (d.1368).

In the 14th century, the French surgeon Guy de Chauliac quoted al-Tasrif over 200 times. Pietro Argallata (d. 1453) described Al-Zahrawi as "without doubt the chief of all surgeons". Al-Zahrawi's influence continued for at least five centuries, extending into the Renaissance, evidenced by al-Tasrif's frequent reference by French surgeon Jacques Delechamps (1513–1588).[15]

The street in Córdoba where he lived is named in his honor as "Calle Albucasis". On this street he lived in house no. 6, which is preserved today by the Spanish Tourist Board with a bronze plaque (awarded in January 1977) which reads: "This was the house where Al-Zahrawi lived."[citation needed]

On Surgery and Instruments

Al-Zahrawi claims that his knowledge comes from careful reading of previous medical texts as well as his own experience: “…whatever skill I have, I have derived for myself by my long reading of the books of the Ancients and my thirst to understand them until I extracted the knowledge of it from them. Then through the whole of my life I have adhered to experience and practice…I have made it accessible for you and rescued it from the abyss of prolixity”.[16]

Throughout the text, Al-Zahrawi uses an authoritative tone to declare his expertise on the topic. For example, when introducing topics or describing procedures, Al-Zahrawi often warns the reader of the skills necessary to complete the task. In chapter forty-eight, "On cauterization for numbness", he defines the required knowledge for the procedure in a commanding tone: “This should not be attempted except by one who has a good knowledge of the anatomy of the limbs and of the exits of the nerves that move the body”.[17] He invents a criterion to generate a standard of skill level, indicating that he himself has surpassed it due to training and experience. As such, he reiterates his preeminence by implying that he is part of an exclusive group of learned surgeons capable of correctly completing this cautery. In another instance, he states that the procedure should be avoided completely by incompetent surgeons: “However, no one should attempt this operation unless he has had long training and practice in the use of cautery”.[18]

Al-Zahrawi was not afraid to depart from old practice, for example, he openly disparages the opinion that cauterization should only be used in the spring season: “…the Ancients…[affirmed] that spring was the best. Myself, I say that cautery is suitable at all times”.[19] Four pages later, he again opposes the opinion that gold is the best material for cauterization, stating that iron is actually his preferred metal: “therefore in our own opinion cauterization is swifter and more successful with iron”.[20] In chapter twenty-nine, "On cauterization for pleurisy", he states: “Now one of the Ancients mentioned that there were some people who used an iron cautery shaped like a probe, and introduced it red hot into the intercostal space until it reached the abscess itself and evacuated the pus…but in this perforation with the cautery there is a danger either that the patient may die on the spot or that an incurable fistula may raise at the place”.[21]