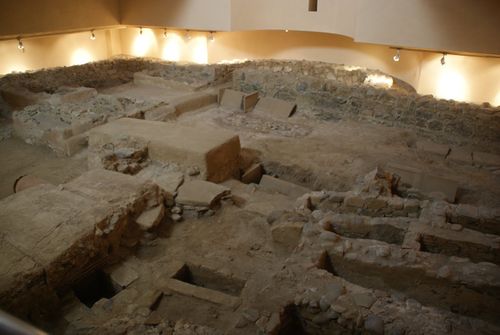 Abyla (called even Ad Septem Fratres or simply "Septem") was a Roman colony in Mauretania Tingitana.It was an ancient city that existed in what is now the downtown of Ceuta.

Septem's location in the southern side of the Gibraltar Strait has made it an important commercial trade and military way-point for many cultures, beginning in the fifth century BC with the Carthaginians (who called for the first time the city with the name "Abyla").

It was not until the Romans took control of the region in 42 AD that the port city, then named "Septem Fratres", assumed an almost exclusively military purpose. The city become a Roman colonia with full rights for the citizens under emperor Claudius. 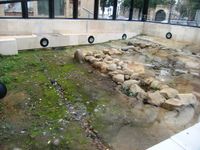 Septem flourished economically in the Roman Empire and developed one of the main production places for fish salting commerce and industry. The city was connected with southern Roman Hispania not only for commerce, but even administratively. Efficient roman roads connected Septem with Tingis and Volubilis, facilitating trade but even military movements of legions.

In the beginning of the first century, under Augustus, the citizens of Septem used mainly the Phoenician language. Soon started the process of Romanization of the inhabitants. Consequently, most of the Septem population spoke Latin in the fourth century, but there was a huge community of local romanised berbers who spoke their berber dialect mixed with some Phoenician loanwords. When the city fell to the Bizantines in the sixth century the Greek was added to the Latin as the official language.

Septem was an important Christian center in Mauretania Tingitana since the fourth century (as recent discovered ruins of a Roman basilica show [1]), and consequently it is the only place in the actual Maghreb where Roman heritage (represented by Christianity) has continuously been present and survived until our days.

When Phoenicians arrived in what is now Ceuta, they found a small Berber settlement. Carthago created and used the little port of Abyla but were the Romans who made it an important port and city. They named it "Septem Frates" because of the seven little hills (that looked like seven brothers, or 'septem frates' in Latin) of the promontory where the city lies.

From the times of Augustus the city started to grow with the name of Septem (or even "Septa"). Some Italian colonists moved to Septem and started the use of Latin, but the population -made mostly of Berbers- continued to use the Phoenician language mixed with local berberisms. In the second century the romanization of Septem was nearly complete, and the use of the phoenician disappeared. Under Septimius Severus the economy enjoyed a huge development, fueled by the fish conserve & salting industry. Septem had nearly 10,000 inhabitants in the late fourth century, under emperor Theodosius I and was nearly fully Christian and Latin speaking according to historian Theodore Mommsen.[2]

Around 140 AD in Septem there was an expansion of its industry of salting, with new factories located near the Forum. The heyday extends until the second half of the third century. After these years there were factories abandoned until the full recovery of the empire (in the 4th and 5th centuries), according even to studies by Enrique Cravioto on monetary use.[3] Salting production was exported in jars manufactured in places near the city. These exports were directed mainly towards Hispania, with whom Septem had an intense business contact. 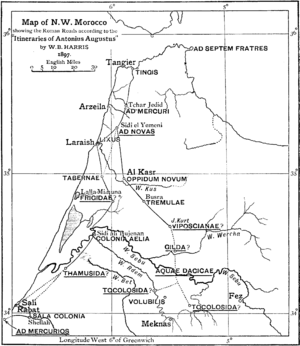 Socially was soon seen -in Claudius and Nero times- the presence in Septem of rich Roman citizens who enjoyed the "ius romanum" or right to full citizenship, which has been documented by the funerary inscriptions found around the Septem basilica. In the second century under Trajan a local Senate was made available for Septem rich members of the "Ordo decurionum" (that in Roman society was the highest nobility).

Septem changed hands again approximately after four centuries of Roman domination, when Vandal tribes ousted the Romans in 426 AD according to historian Vilaverde.[4] After being controlled by the Visigoths, it then became an outpost of the Byzantine Empire (called in Ancient Greek: Άβυλα).

All the territory west of Caesarea had already been lost by the Vandals to the Berbers "Mauri", but a re-established "Dux Mauretaniae" kept a Byzantine military unit at Septem. This was the last Byzantine outpost in Mauretania Tingitana; the rest of what had been the Roman province was united with the Byzantine part of Andalusia, under the name, "Prefecture of Africa". Most of the North African coast was later organised as the civilian Exarchate of Carthage, a special status in view of the outpost defense needs.

Around 710 AD, as Muslim armies approached the city, its Byzantine governor, Julian (described even as King of the Ghomara Berbers) changed his allegiance, and exhorted the Muslims to invade the Iberian Peninsula. Under the leadership of the Berber general Tariq ibn Ziyad, the Muslims used Ceuta as a staging ground for an assault on Visigothic Iberian Peninsula. After Julian's death, the Berbers took direct control of the city, which the indigenous Berber tribes resented. They destroyed Ceuta during the Kharijite rebellion led by Maysara al-Matghari in 740 AD.

Septem remained as a small village (populated even by a few Christians) nearly all in ruins until it was resettled in the ninth century by Mâjakas, chief of the Majkasa Berber tribe, who started the short-lived Banu Isam dynasty.[5]

The episode of the martyrdom of Saint Daniele Fasanella[6] and his Franciscans in 1227 AD, showed that Christians were still present in "Septa" (as was called in Arab) in the thirteenth century: this Christian continuity remained in the outskirts of the city until the arrival of the Portuguese in the 15th century. Since then the city -renamed Ceuta- has remained in Christian hands (Portuguese and Spanish) and now has a majority of population speaking Spanish, a neolatin language.

Indeed the Berber Christians of Mauretania's Septem, who seem to have been assimilated in the Christianity of nearby Spain, are considered the only survivors until today of the Christian autochthonous faith in Roman Africa according to Robin Daniel,[7] even if we have no confirmed proofs of their existence from the thirteenth century until the first arrival of the Portuguese in the late fourteenth century.