From Infogalactic: the planetary knowledge core
Jump to: navigation, search
This article is about the current Academy. For the original Academy founded by Plato, see Platonic Academy.
"Athens Academy" redirects here. For the private college-preparatory school in Georgia, US, see Athens Academy (school). 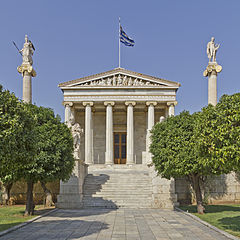 The main building of the Academy of Athens, one of Theophil Hansen's "Trilogy" in central Athens.

The Academy of Athens (Greek: Ακαδημία Αθηνών, Akadimía Athinón) is Greece's national academy, and the highest research establishment in the country. It was established in 1926, and operates under the supervision of the Ministry of Education. The Academy's main building is one of the major landmarks of Athens.

The organization of the Academy of Athens, whose title hearkens back to the ancient Academy of Plato, was first established on 18 March 1926, and its charter was ratified by the law 4398/1929. This charter, with subsequent amendments, is still valid and governs the Academy's affairs. According to it, the Academy is divided into three Orders: Natural Sciences, Letters and Arts, Moral and Political Sciences.

The Academy today, maintains 12 research centres, 10 research offices and the "Ioannis Sykoutris" central library. In 2002, the Foundation for Biomedical Research of the Academy of Athens was established. The Hellenic Institute for Byzantine and Post-Byzantine Studies in Venice also functions under the supervision of the Academy. 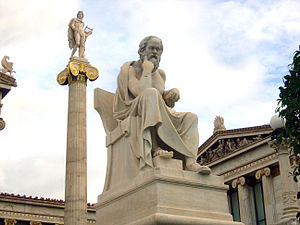 Statue of Socrates with the Apollo column in the background (work of Leonidas Drosis). 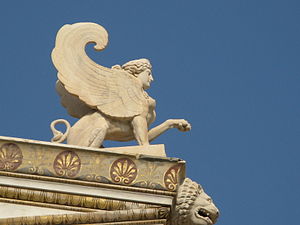 Detail of stone carving of Sphinx on the facade. 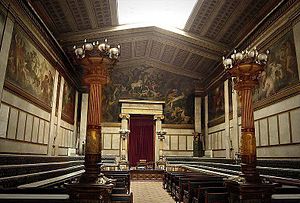 The main building of the Academy is a neoclassical building between Panepistimiou Street and Akadimias Street in the centre of Athens. The building was designed as part of an architectural "trilogy" in 1859 by the Danish architect Theophil Hansen, along with the University and the National Library. Funds had been provided by the magnate Simon Sinas specifically for the purpose, and the foundation stone was laid on 2 August 1859. Construction proceeded rapidly, after 1861 under the supervision of Ernst Ziller, but the internal tumults during the latter years of King Otto's reign, which resulted in his ousting in 1862, hampered construction until it was stopped in 1864. Works resumed in 1868, but the building was not completed until 1885, at a total cost of 2,843,319 gold drachmas, most of it provided by Sinas, and, after his death, by his wife Ifigeneia.

The Greek neo-classical sculptor Leonidas Drosis sculpted the principle multi-figure pediment sculpture, on the theme of the birth of Athena, based on a design by painter Carl Rahl. This brought first prize at the Vienna Exhibition of 1873.[1] Drosis is also responsible for the figures of Athena and Apollo with lyre on the Academy's flanking pillars, and the seated marble figures of Plato and Socrates, which were executed "by the Italian sculptor Piccarelli".[1] The eight smaller pediments in the Academy complex are the terra-cotta work of Austrian sculptor Franz Melnitzky.[2] Interior murals and paintings were done by the Austrian artist Christian Griepenkerl.

On 20 March 1887, the building of the "Sinaean Academy", as it was called, was delivered by Ziller to the Greek Prime Minister, Charilaos Trikoupis. In the absence of a national Academy, the building was used for housing the Numismatic Museum in 1890, and in 1914 the Byzantine Museum and the State Archives. Finally, on 24 March 1926, the building was handed over to the newly established Academy of Athens.

Main article: List of members of the Academy of Athens

The Academy of Athens was recently selected as main motif for a high value euro collectors' coin; the €100 Greek Academy of Athens commemorative coin, minted in 2004 to commemorate the 2004 Summer Olympics. In the obverse of the coin, a close view of the building is depicted. The intention was to highlight the premise that in the city of Athena, the Olympic Games should not only be the most important athletic event, but also reflect equal importance toward intellectual and cultural activities. All three should be equivalent to the style and character of the city that was the birthplace and the matrix for the revival of the modern Olympic Games.