The Academy of Fine Arts Vienna was founded in 1692 as a private academy modelled on the Accademia di San Luca and the Parisien Académie de peinture et de sculpture by the court-painter Peter Strudel, who became the Praefectus Academiae Nostrae. In 1701 he was ennobled by Emperor Joseph I as Freiherr (Baron) of the Empire. With his death in 1714, the academy temporarily closed.[1] 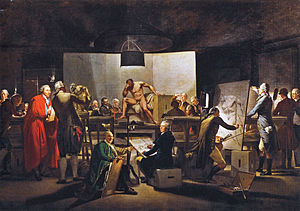 On 20 January 1725, Emperor Charles VI appointed the Frenchman Jacob van Schuppen as Prefect and Director of the Academy, which was refounded as the k.k. Hofakademie der Maler, Bildhauer und Baukunst (Imperial and Royal Court Academy of painters, sculptors and architecture). Upon Charles' death in 1740, the academy at first declined, however during the rule of his daughter Empress Maria Theresa, a new statute reformed the academy in 1751. The prestige of the academy grew during the deanships of Michelangelo Unterberger and Paul Troger, and in 1767 the archduchesses Maria Anna and Maria Carolina were made the first Honorary Members. In 1772, there were further reforms to the organisational structure. Chancellor Wenzel Anton Kaunitz integrated all existing art schools into the k.k. vereinigten Akademie der bildenden Künste (Imperial and Royal Unified Academy of Fine Arts). The word "vereinigten" (unified) was later dropped. In 1822 the art cabinet grew significantly with the bequest of honorary member Anton Franz de Paula Graf Lamberg-Sprinzenstein. His collection still forms the backbone of the art on display.[2]

In 1872 Emperor Franz Joseph I of Austria approved a statute making the academy the supreme government authority for the arts. A new building was constructed according to plans designed by the faculty Theophil Hansen in the course of the layout of the Ringstraße boulevard. On 3 April 1877, the present-day building on Schillerplatz in the Innere Stadt district was inaugurated, the interior works, including ceiling frescos by Anselm Feuerbach, continued until 1892. In 1907 and 1908, young Adolf Hitler, who had come from Linz, was twice denied admission to the drawing class. He stayed in Vienna, subsisting on his orphan allowance, and tried unsuccessfully to continue his profession as an artist. Soon he had withdrawn into poverty and started selling amateur paintings, mostly watercolours, for meagre sustenance until he left Vienna for Munich in May 1913. 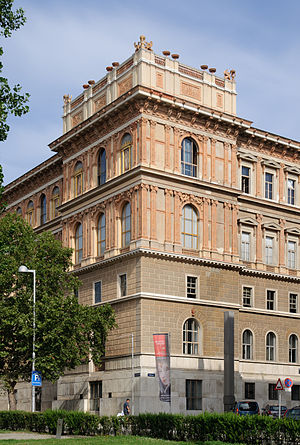 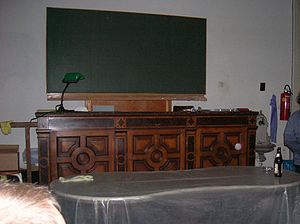 Anatomical room of the Akademie

During the Austrian Anschluss to Nazi Germany from 1938–1945, the academy was forced to heavily reduce its number of Jewish staff. After World War II, the academy was reconstituted in 1955 and its autonomy reconfirmed. It has had university status since 1998, but retained its original name. It is currently the only Austrian university that doesn't have the word "university" in its name.

The academy is divided into the following institutes:[3]

The Academy currently has about 900 students, almost a quarter of which are foreign students. Its faculty includes "stars" such as Peter Sloterdijk. Its library houses approx. 110,000 volumes and its "etching cabinet" (Kupferstichkabinett) has about 150,000 drawings and prints. The collection is one of the biggest in Austria, and is used for academic purposes, although portions are also open to the general public.

Other students and professors

The Academy of Fine Arts Vienna rejected Adolf Hitler twice (in 1907 and 1908), because of his "unfitness for painting".