Accept is a German heavy metal band from the town of Solingen, originally assembled by former vocalist Udo Dirkschneider, guitarist Wolf Hoffmann and bassist Peter Baltes. Their beginnings can be traced back to the late 1960s. The band played an important role in the development of speed[1] and thrash metal,[2] being part of the German heavy metal scene, which emerged in the early to mid-1980s. Accept achieved commercial success with their fifth studio album Balls to the Wall (1983), which remains the band's only album to be certified gold in the United States and Canada,[3][4] and spawned their well-known hit "Balls to the Wall".

Following their disbandment in 1997 and short-lived reunion in 2005, Accept reunited again in 2009 with former T.T. Quick frontman Mark Tornillo[5] replacing Dirkschneider, and released their three highest charting albums to date, Blood of the Nations (2010), Stalingrad (2012) and Blind Rage (2014), the latter of which was Accept's first album to reach number one on the charts in their home country. Accept is currently preparing to work on a new album.[6]

Accept's beginnings can be traced back to 1968 when Udo Dirkschneider and Michael Wagener formed a local band called Band X, which eventually changed its name to Accept. For many years, Accept went through numerous line-up changes. This instability essentially kept the band on an amateur level, making sporadic appearances in festival concerts. Accept's professional career began in 1976, with Udo Dirkschneider, Wolf Hoffmann, Gerhard Wahl, Dieter Rubach and Frank Friedrich, when they were invited to play at one of the first rock and roll festivals in Germany — Rock am Rhein. Following the festival the band were offered a recording deal. Their first recording was the self-titled Accept album, which did not achieve much commercial success.

The first stable line-up of Accept was composed of vocalist Udo Dirkschneider, guitarists Wolf Hoffmann and Gerhard Wahl, bassist Peter Baltes and drummer Frank Friedrich. Friedrich and Wahl quit the band after the release of Accept and were replaced by Stefan Kaufmann and Jörg Fischer. This line-up recorded I'm a Rebel in 1980. The title track originally was written for AC/DC and recorded by the band but never released by them.[7] The album brought some media attention, the band being invited to make a televised appearance.

In 1981, their next album, Breaker, was released, and the band employed manager Gaby Hauke. Accept also joined Judas Priest's World Wide Blitz Tour and obtained attention outside of Europe for the first time.

Restless and Wild was released in 1982, although Jörg Fischer quit the band a short time before the recording took place. Jan Koemmet was hired as guitarist, but departed from the band before the recording of the album.[8][9] Restless and Wild saw an evolution in the band's sound, which incorporated characteristics defining the genre later dubbed speed metal.[1] Gaby Hauke was credited as "Deaffy" on two of the tracks.

Accept's next release, Balls to the Wall, was released in 1983, now with guitarist Herman Frank (ex-Sinner). The album was more conceptual, and included lyrical themes about politics, sexuality and human relationships. For example, "Balls to the Wall" refers to slaves revolting against oppressing masters, while "Fight It Back" is about social misfits fighting against conformity. All songs were credited to Accept and "Deaffy". Deaffy was manager Gaby Hauke's pseudonym as the band's lyricist, although she did not officially claim ownership until the band had broken up for the second time.

During a 1983 show in their hometown, the band met Jörg Fischer by chance and on Hauke's insistence, Fischer rejoined the band. A world tour followed through 1984, including the Monsters of Rock festival. By this time, the band was supported by Bad Steve, a band which was led by ex-Accept-members Dieter Rubach, Jan Koemmet and Frank Friedrich.

Metal Heart was released in 1985. Produced by Scorpions producer Dieter Dierks, it presented the band's creative peak. Accept toured the world supporting the album, and documented the live shows with the live mini-album Kaizoku-Ban.

The follow up, Russian Roulette, was released in 1986. In 1987, Udo Dirkschneider decided to embark on a solo career. Supporting this decision, the songwriting team in Accept wrote his entire solo album, released in 1987 as Animal House under the band moniker U.D.O.

Parallel to work on Animal House, Accept started to audition vocalists. The band tried out a few singers, including Michael White[10] and Baby Tuckoo singer Rob Armitage, whom they even featured in promo photos and metal magazine interviews, and also recorded demos with. However, American vocalist David Reece was chosen and this new line-up recorded and released Eat the Heat in 1989.

Accept's career came to a sudden halt, when Stefan Kaufmann sustained a serious injury to his back during the tour in support of the album. He was briefly replaced by House of Lords drummer Ken Mary for the remainder of the US tour. By the tour end in late 1989, the band decided that without Kaufmann, and with differences surfacing with Reece, it was time to cease their activities for the time being. 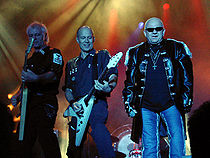 The live album Staying a Life, recorded in 1985, was released in 1990 as a souvenir celebrating their career.

Their comeback album, Objection Overruled, was released in 1993 and was a qualified success in Europe and the USA. A world tour followed, and another album, entitled Death Row, was released in 1994. Kaufmann became unable to play once again due to his recurring back injury and Stefan Schwarzmann became the temporary replacement.

Predator was recorded in 1996, in Nashville, with Udo's long time (school) friend and producer Michael Wagener at the helm and with Michael Cartellone (from Damn Yankees) guesting on drums. Accept's tour supporting Predator took place in North America, South America, Europe and Asia, with their last concert in Tokyo, Japan.

Between 1997 and 2005, all the members continued working on their own projects. In 2005, Accept received an invitation from various European promoters for a short summer European Festival tour with Accept's classic line-up (Hoffmann, Baltes, Dirkschneider, Frank and Schwarzmann). These festivals turned out to be a stunning success, with the last show on August 27, 2005, in Kavarna, Bulgaria, at the Kaliakra Rock Fest.

Asked in May 2007 if Accept were planning on writing and recording new material in the near future, Dirkschneider replied:

That would be a problem. You know, it's easy to play the old songs, because they already exist. Especially for me it was easier, because I still do those classics with U.D.O., but for some of the guys it was a bit harder. But everybody did a great job on stage. I understand that people want a new Accept album, but composing songs together would have been a disaster. That way we would destroy more than we would create. We have a good relationship now and it's best to keep it that way.

On May 14, 2009, Udo Dirkschneider officially announced that he would not be participating in the rumoured Accept reunion.[12] 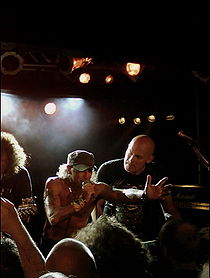 Mark Tornillo (pictured in the middle) with guitarist Wolf Hoffmann in Stockholm, May 20, 2010. Tornillo replaced Udo Dirkschneider as the band's vocalist, when Accept reformed in 2009.

At the end of May 2009, rumours again surfaced on a possible Accept reformation, when bassist Peter Baltes revealed he spent a weekend at his house in Pennsylvania "shredding away" with guitarist Wolf Hoffmann. "Something amazing is in the works", Baltes explained. "As soon as I can, I'll let everybody know. Let's make the 'Metal Heart' beat again."

A coincidental meeting between Accept and former T.T. Quick singer Mark Tornillo at this informal jam session meant shortly after Tornillo was announced as the new vocalist.[5]

A new album was written and recorded with Andy Sneap (of Megadeth, BLAZE, Exodus, Testament, Arch Enemy and Onslaught fame) as producer. Titled Blood of the Nations, it was the first original Accept album in fourteen years.[13]

The new line-up made their live debut on 8 May 2010 at the Gramercy Theatre in New York City, their first American concert in fifteen years.[14]

On May 21, 2010, the video for "Teutonic Terror" was Number 5 on the worldwide video charts in all genres on MySpace, topping such artists as Miley Cyrus, Justin Bieber and Christina Aguilera. The video also topped the MySpace Global Metal Charts at Number 1.[citation needed] 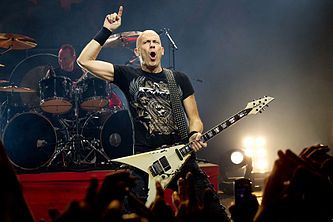 Wolf Hoffmann with Accept in Minsk, Belarus, 2011. Hoffmann has been Accept's guitarist since its inception in 1976.

On June 13, 2010, Accept opened for AC/DC in Stuttgart, Germany, and on June 25, 2010, they headlined the Sonisphere festival in Romania and Turkey. With a set of over two hours, classics like "Balls to the Wall", "Metal Heart" and "Princess of the Dawn" were played along with the new album material. Blood of the Nations was released in Europe on August 20, 2010, and made a chart debut at Number 4 in the official German Media Control Charts, the band's second highest chart debut in their career.[15]

Blood of the Nations was released September 4 in Japan, and September 18, 2010, in the United States. Accept spent 80 days on a summer tour traveling over 65,000 km and playing for over 450,000 fans. In October, the band appeared at the prestigious Japanese Festival LOUDPARK outside of Tokyo to 40,000 fans along with Ozzy Osbourne, Motörhead and Stone Sour.

Within a month of the release of Blood of the Nations, Wolf Hoffmann told "Metal Asylum": "We are already thinking about and writing for the next record. We've all missed doing Accept and we realized we missed doing this. Of course we are not 20 years old anymore and not ready to do just anything to be successful, we're not that desperate. [laughs] We are looking to do what makes sense and that's fun."[16]

On April 8, 2013, Wolf Hoffmann told Chile's Radio Futuro that Accept had begun writing new material for their fourteenth studio album and would "definitely go back to the studio as soon as [they] can."[18] Four months later, on August 9 at the Bloodstock Open Air festival 2013, Wolf told Metal Shock Finland:

Our upcoming album is hopefully going to be out next year. We've started working on writing some songs; we haven't recorded anything yet. But over the winter — maybe early next year — we'll start recording it and try to make it every bit as good as the last one, maybe even better, if we succeed, we'll see... It's going to be as heavy as the rest.[19][20]

Accept released their fourteenth studio album Blind Rage on July 18, 2014 and on their world tour, they are playing in Australia for the very first time.[21] Blind Rage became Accept's first album to debut at number one on the charts in their home country.[22]

On June 5, 2015, prior to the band's performance at the South Park festival in Tampere, Finland, bassist Peter Baltes told Kaaos TV that Accept planned to begin work on a new album after the conclusion of the Blind Rage tour.[26] Asked in a July 2015 interview about the band's future, guitarist Wolf Hoffmann replied, "We will continue for a few more weeks, this run of touring, and then we'll take a little break and come back in the fall, but we're pretty much wrapping up the Blind Rage tour at this point; it's the very last phase of this whole cycle. And then the next album will have to be written and to be recorded, and how long that's gonna take and when that's all gonna happen, who knows? But it'll happen; that's all I know."[6]

In the second season of Justified, the character Coover is frequently seen with an Accept shirt on.[27]

Accept songs in other media

Fast as a Shark

Balls to the Wall

For more details on this topic, see Accept discography. 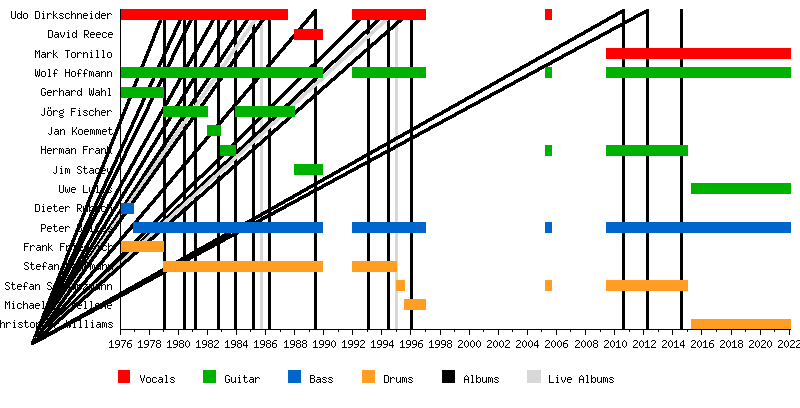