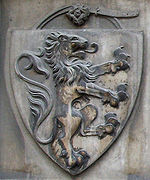 The Acciaioli, Acciaiuoli, Accioly or Acciajuoli was an important family of Florence.

Family name is also written Acciaioli, Acciainoli, or Accioly, Accioli and Acyoly in Portugal and Brazil, where there are branches of it. Descent can be traced in an unbroken line from one Gugliarello Acciaioli in the 12th century; family legend says that Gugliarello (a name possibly derived from It. guglia, needle) migrated from Brescia to Florence in 1160 because they were Guelphs and fled Barbarossa's invasion of Northern Italy. The Acciaioli founded a powerful bank in the 13th century (Compagna di Ser Leone degli Acciaioli e de' suoi consorti) which had branches from Greece to Western Europe. Bishop Angiolo Acciaioli briefly ruled Florence in the mid-14th century after the deposition of Gauthier de Brienne. Later they associated themselves to the Albizzi and then to the elder Medici in the 15th century. From about 1390 to 1460 they ruled the Duchy of Athens and kept close ties with the younger branch of the Medici through the marriage of Laudomia Acciaioli to Pierfrancesco de' Medici, from which the later Grand Dukes of Tuscany are descended, as well as several royal houses.[1] In Florence, the Lungarno degli Acciaioli borders the Arno from the Ponte Vecchio to the Ponte Santa Trinita.

Simone di Zanobi Acciaioli migrated before 1512 to the island of Madeira where he represented the family's commercial interests. The Portuguese and Brazilian Accioly or Accioli family is descended from him.