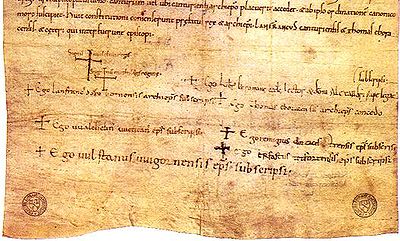 The Accord of Winchester from 1072, signed by (top to bottom, left-hand column) William, Matilda, Lanfranc, Walkelin and Wulfstan, along with (top to bottom, right-hand column) Papal legate, Thomas, Remigius and Herfast. The signatures of William I and Matilda are the first two large crosses.

It originated in a dispute over primacy between Thomas, the archbishop of York, and Lanfranc, the new Norman archbishop of Canterbury, soon after the latter had taken office. The case was first heard by King William at the old Saxon royal capital of Winchester at Easter (8 April) 1072, in the royal chapel in the castle. It was then heard at Windsor at Pentecost (27 May), where the final settlement was made, with William deciding in Lanfranc's favour, and formalized in this document.

This did not end the Canterbury-York dispute over the primacy, as it continued for a number of years after this.[1]

When William and his queen signed the document with crosses, it did not necessarily mean they were unused to writing, infirm or even illiterate. They and all the bishops signed with crosses, as illiterate people would later do, but they did so in accordance with current legal practice, not because they or the bishops could not write their own names.[citation needed]

and additionally, in the CCA-DCc-ChAnt/A/1 version, :

Both versions are endorsed with descriptions and marks in 13th century hands.

In the Canterbury Cathedral Archives:

In the British Library

Discussions of the document, with transcriptions, summaries, notes and photographs, can be found in: