Achhut Kannya (Hindi: अछूत कन्या, Urdu: اچھوت کنیا, translation: Untouchable Maiden) is a 1936 Hindi film. Among the early super-hits in the Bombay film industry, the film deals with the social position of Dalit girls and is considered a reformist period-piece.

The film was one of several successful Bombay Talkies collaborations between Franz Osten, Niranjan Pal, Himanshu Rai, and their leading lady, Devika Rani. Music is by Saraswati Devi and lyrics by J.S. Kashyap. 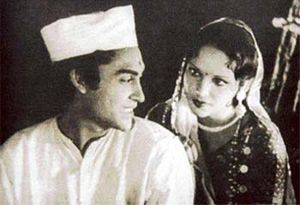 Pratap (Ashok Kumar) and Kasturi (Devika Rani) are childhood friends, deeply in love with each other. Unfortunately, Pratap is a Brahmin and Kasturi an untouchable (achhut). Social mores of the time (the movies is set in the distant past, probably before 1900) preclude any possibility of the two ever uniting.

Pratap gets married to Meera (Manorama), while Kasturi marries Manu (Anwar). Both of them are unable to forget their first love, but try hard to make their respective marriages work. Unfortunately, the situation gets compounded by the fact that Manu has a first wife, Kajri, with whom he is estranged due to excessive interference from his in-laws. The hitherto smug Kajri suddenly feels threatened by the arrival of a new woman in her husband's life.

Meera is resigned to destiny until Kajri poisons her mind. The two of them hatch a diabolical conspiracy to discredit Kasturi in the eyes of Manu. They take Kasturi along to a mela in the neighbouring village, and then abandon her there. All alone in the unknown place, Kasturi has no choice but to hitch a ride with Pratap, who has a food stall there. Meera and Kajari then tell Mannu that Kasturi is with Pratap.

The enraged Manu attacks Pratap when they arrive at the railroad crossing where he is working as the attendant. There ensures a fistcuff between the two, even as a train rushes towards them. Desperate to save them, Kasturi rushes towards the train imploring the driver to stop and in the process gets herself killed. That act of selflessness makes her a martyr in the eyes of the villagers, despite her lowly origins.