This article is on the Italian racecar driver. For the Columbia University philosopher see Achille Varzi (philosopher). 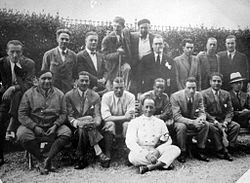 Born in Galliate, province of Novara (Piedmont), Achille Varzi was the son of a textile manufacturer. As a young man, he was a successful motorcycle racer of Garelli, DOT, Moto Guzzi and Sunbeam, and rode seven times in the Isle of Man TT from 1924 before switching to auto racing in 1928 where, for the next ten years, he would rival Tazio Nuvolari, Rudolf Caracciola and Bernd Rosemeyer.

Varzi's first race car was a Type 35 Bugatti but he shortly changed to driving an Alfa Romeo, a brand with which he would score many victories during the 1929 Italian racing season. In 1930 Varzi acquired a vehicle from the relatively new Maserati company. He drove it as well as an Alfa Romeo earning his country's racing championship, a feat he would repeat in 1934. One of his big victories came at the prestigious Targa Florio where he upset the favored Louis Chiron. Following his win at the 1933 Tripoli Grand Prix, a race at the time associated with a lottery, Varzi was at the forefront of allegations that the race had been fixed.

Varzi won 6 Grand Prix in 1934 driving the Alfa Romeo P3, at Alessandria, Tripoli, Targa Florio, Penya Rhin at Barcelona, Coppa Ciano and Nice. He also became the first driver in history to hold both the Targa Florio and Mille Miglia title in one season[1]

Although the Alfa Romeo team had proved to be competitive under the management of Enzo Ferrari, Varzi decided to join the Auto Union team, racing for them between 1935 and 1937. This move coincided with Varzi having serious personal problems, including an addiction to morphine and a difficult affair with Ilse Pietsch (Engel/Hubitsch[1]/Feininger), the wife of a fellow driver Paul Pietsch. Quickly overshadowed by team-mate Bernd Rosemeyer, his trips to the winners circle dropped to only four, but he did win his third Tripoli Grand Prix in his third different vehicle. By 1938 he had dropped out of sight and the advent of World War II ended racing in Europe. During the war, Varzi overcame his drug addiction and settled down with his new wife, Norma Colombo. At the end of the War, Varzi made a remarkable comeback at the age of 42. In 1946 he attempted to race a Maserati for the Indianapolis 500 but failed to qualify.[2] In 1947, he won three minor Grand Prix races and traveled to Argentina to race in the Buenos Aires Grand Prix.

During practise runs for the 1948 Swiss Grand Prix a light rain fell on the Bremgarten track. Varzi's Alfa Romeo 158 skidded on the wet surface, flipping over and crushing him to death. He was buried in his hometown.

Varzi's death resulted in the FIA mandating the wearing of crash helmets for racing, which had been optional previously.[3] A Formula One team entered some races in 1950 as Scuderia Achille Varzi. The team was equipped with Maseratis 4CL and 4CLT and featured drivers José Froilán González, Antonio Branca, Alfredo Pián and Nello Pagani.[4]

His relative and namesake, Achille C. Varzi, is Professor of Philosophy at Columbia University.