For the former Arab village at this site see Az-Zeeb. For the self-proclaimed micronation see Akhzivland.

Achziv is an ancient site on the Mediterranean coast of northern Israel, between the border with Lebanon and the city of Acre. Today its grounds are shared between a national park, and a beach-side resort in the guise of the "Akhzivland" self-proclaimed micronation.

Excavations have unearthed a fortified Canaanite city of the second millennium BCE. The Phoenician town of the first millennium BCE is known both from the Hebrew Bible and Assyrian sources. Phoenician Achzib went through ups and downs during the Persian and Hellenistic periods. In Roman times Acdippa was a road station. The Bordeaux Pilgrim mentions it in 333-334 CE still as a road station; Jewish sources of the Byzantine period call it Kheziv and Gesiv. There is no information about settlement at the site for the Early Muslim period. Crusaders built here a new village with a castle. During the Mamluk and Ottoman periods a modest village occupied the old tell (archaeological mound). This village was depopulated during the 1948 Arab-Israeli war. Since then the tell has not been resettled, the only permanent resident being an eccentric Israeli who has declared a small stretch of beach-side property to be "independent" and has been welcoming visitors since 1975. Most of the overall site though is part of a national park.

Achziv is situated 15 kilometers north of Acre, within the municipal area of Nahariya. 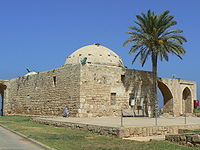 The mosque of al-Zib, restored at Achziv National Park

The first fortified settlement found by archaeologists is a large Canaanite port city from the Middle Bronze Age IIB (1800-1550 BCE).[1][2] The massive ramparts, some 4.5 m (15 ft) high, protected the city proper and a large area of port facilities. To the north and south the city extended to the two nearby rivers, which the Canaanite engineers connected by a fosse, thus transforming Achzib into an island.[1] A substantial destruction level from the beginning of the Late Bronze Age proves that even these fortifications were eventually not sufficient.[2]

Iron Age; in the Hebrew Bible

According to the Hebrew Bible, the area including the Phoenician city of Achzib was assigned to the tribe of Asher, but the Asherites did not manage to conquer it from the Phoenicians:[3]

King David added the city into his Kingdom, but King Solomon returned it to Hiram I as part of the famous pact.

During the invasions of Sennacherib the Assyrians conquered the city.

During the reign of the Seleucids the border was established at Rosh HaNikra, just north to Achziv, making it a border city which they called Ekdippa (Έκδιππα in Ancient Greek) and put it under the control of Acre.

A maritime city named Cziv, nine miles (14 km) north of Acre, is mentioned by Josephus Flavius, and later by Eusebius. Achziv (Cheziv) is mentioned in Jewish rabbinic writings, for example Midrash Vayikra Rabba 37:4. Additionally, Achziv is mentioned in the Babylonian Talmud, and by the relating Middle Age commentators, concerning the location of Achziv in regards to historical borders of Israel.

During the Crusader period, the site was known as Casale Umberti[4] or Casal Humberti, after Hubert of Pacy which held the casale and is documented in 1108.[5] European farmers settled there in 1153 under Baldwin III. In 1232 it was the site of the Battle of Casal Imbert between German and French Crusaders as part of the War of the Lombards.

The Arab village of Az-Zeeb was established during the Mamluk and Ottoman periods, the houses erected using the stones of the Crusader castle.

In 1946, The Jewish Resistance Movement attempted to blow up the railroad bridge over the creek at Achziv in an operation known as Night of the Bridges. A monument to the 14 soldiers killed there was erected on the site.

During the 1948 Arab–Israeli War the Arab villagers of az-Zib fled to Lebanon. 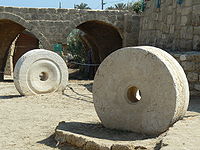 Remnants of ancient Achziv, now known as Tel Achziv, are located on a sandstone mound between two streams, Kziv on the north and Shaal on the south, close to the border with Lebanon.

An ancient port was located on the coast, and another secondary port is located 700 m to the south.

Archeological excavations have revealed that a walled city existed at the location from the Middle Bronze period. History of Achziv goes back to the Chalcolithic period (4500-3200 BC).