From Infogalactic: the planetary knowledge core
Jump to: navigation, search
For the 1994 novel by Irvine Welsh, see The Acid House.

Acid house is a subgenre of house music developed around the mid-1980s by DJs from Chicago. The style was defined primarily by the deep basslines and "squelching" sounds of the Roland TB-303 electronic synthesizer-sequencer.[1] Acid house spread to the United Kingdom and continental Europe, where it was played by DJs in the acid house and later rave scenes. By the late 1980s, acid house had moved into the British mainstream, where it had some influence on pop and dance styles. 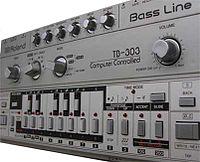 Acid house's minimalist production aesthetic combined house music's ubiquitous programmed 4/4 beat with the electronic ‘squelch' sound produced by the Roland TB-303 electronic synthesizer-sequencer by constantly modulating its frequency and resonance controls to create 'movement' in otherwise simple bass patterns. Other elements, such as synthetic strings and stabs, were usually minimal. Sometimes tracks were instrumentals such as Phuture's "Acid Tracks", or contained full vocal performances such as Pierre's Pfantasy Club's "Dream Girl", while others were essentially instrumentals complemented by the odd spoken word 'drop-in', such as Phuture's "Slam".[2]

File:BTBbeatdis.jpg
Beat Dis by Bomb the Bass (1988) features the "bloodied" version of the popular smiley icon.

English acid house and rave fans used the yellow smiley face symbol simply as an emblem of the music and scene, a "vapid, anonymous smile" that portrayed the "simplest and gentlest of the Eighties’ youth manifestations" that was non-aggressive, "except in terms of decibels" at the high-volume DJ parties.[5] Some acid house fans used a smiley face with a blood streak on it, which Watchmen comics creator Alan Moore asserts was based on Dave Gibbons' artwork for the series.[6]

There are conflicting accounts about how the term acid came to be used to describe this style of house music.

One account ties it to Phuture's "Acid Tracks" Before the song was given a title for commercial release, it was played by DJ Ron Hardy at a nightclub[7] where psychedelic drugs were reportedly used.[8] The club's patrons called the song "Ron Hardy's Acid Track" (or "Ron Hardy's Acid Trax").[7] The song was released with the title "Acid Trax" on Larry Sherman's label Trax Records in 1987. Sources differ on whether it was Phuture or Sherman who chose the title; Phuture's DJ Pierre says the group did because the song was already known by that title,[7] but Sherman says he chose the title because the song reminded him of acid rock.[9] Regardless, after the release of Phuture's song, the term acid house came into common parlance.[7]

Some accounts say the reference to "acid" may be a celebratory reference to psychedelic drugs in general, such as LSD, as well as the popular club drug Ecstasy (MDMA).[10] According to Rietveld, it was the house sensibility of Chicago, in a club like Hardy's The Music Box, that afforded it its initial meaning. In her view "acid connotes the fragmentation of experience and dislocation of meaning due to the unstructuring effects on thought patterns which the psycho-active drug LSD or 'Acid' can bring about.[11] In the context of the creation of "Acid Tracks" it indicated a concept rather than the use of psycho-active drugs in itself.[12]

Some accounts disavow psychedelic connotations. One theory, holding that acid was a derogatory reference towards the use of samples in acid house music, was repeated in the press and in the British House of Commons.[13] In this theory, the term acid came from the slang term "acid burning", which the Oxford Dictionary of New Words calls "a term for stealing."[10] "[14] In 1991, UK Libertarian advocate Paul Staines claimed that he had coined this theory to discourage the government from adopting anti-rave party legislation.[15][16]

Several accounts[which?] claim that Genesis P-Orridge coined the term on the 1988 Psychic TV release “Tune In (Turn on the Acid House).”[citation needed] By other accounts, while shopping in Chicago in 1986, P-Orridge came across a bin of records marked acid, indicating a corrosive liquid, and mistook it for a reference to LSD [17] P-Orridge allegedly bought the entire contents of the bin and went on to play them when DJing in Ibiza; and in so doing inadvertently introduced the Chicago sound to the MDMA-using, Osho-following "orange people" in attendance at the time.[17] P-Orridge's role is disputed by music journalist Simon Reynolds, who calls it a "self-serving myth",[18] and by Psychic TV band member Fred Giannelli, who suggested that "Gen has made this claim so many times in interviews that he actually believes his own bullshit." [19]

The earliest recorded examples of acid house are a matter of debate. At least one historian considers the Phuture's "Acid Trax" to be the genre's earliest example;[9] DJ Pierre says it may have been composed as early as 1985,[20] but it was not released until 1987. Another points out Sleezy D's "I've Lost Control" (1986) was the first to be released on vinyl, and it's impossible to know which track was created first.[20]

The first acid house records were produced in Chicago, Illinois. Phuture, a group founded by Nathan "DJ Pierre" Jones, Earl "Spanky" Smith Jr., and Herbert "Herb J" Jackson, is credited with having been the first to use the TB-303 in the house-music context (the instrument appeared as early as 1983 in disco via Alexander Robotnick).[21] The group's 12-minute "Acid Tracks" was recorded to tape and was played by DJ Ron Hardy at the Music Box, where Hardy was resident DJ. Hardy once played it four times over the course of an evening until the crowd responded favorably.[7] Chicago's house music scene suffered a crackdown on parties and events by the police. Sales of house records dwindled and, by 1988, the genre was selling less than a tenth as many records as at the height of the style's popularity.[22] However, house and especially acid house was beginning to experience a surge in popularity in Britain.[23]

London's club Shoom opened in November 1987[24] and was one of the first clubs to introduce acid house to the clubbing public of the UK. It was opened by Danny Rampling and his wife, Jenny. The club was extremely exclusive and featured thick fog, a dreamy atmosphere and acid house.[25] This period began what some call the Second Summer of Love, a movement credited with a reduction in football hooliganism: instead of fights, football fans were listening to music, taking ecstasy, and joining the other club attendees in a peaceful movement that has been compared to the Summer of Love in San Francisco in 1967.[26]

Another club called Trip was opened in June 1988 by Nicky Holloway at the Astoria in London's West End.[27] Trip was geared directly towards the acid house music scene. It was known for its intensity and stayed open until 3 AM. The patrons would spill into the streets chanting and drew the police on regular occasions. The reputation that occurrences like this created along with the UK's strong anti-club laws started to make it increasingly difficult to offer events in the conventional club atmosphere. Considered illegal in London during the late 80s, after-hour clubbing was against the law. However, this did not stop the club-goers from continuing after-hours dancing. Police would raid the after-hour parties, so the groups began to assemble inside warehouses and other inconspicuous venues in secret, hence also marking the first developments of the rave.[28] Raves were well attended at this time and consisted of single events or moving series of parties thrown by production companies or unlicensed clubs. Two well-known groups at this point were Sunrise, who held particularly massive outdoor events, and Revolution in Progress (RIP), known for the dark atmosphere and hard music at events which were usually thrown in warehouses[28] or at Clink Street, a South East London nightclub housed in a former jail.[29]

The Sunrise group threw several large acid house raves in Britain which gathered serious press attention. In 1988 they threw "Burn It Up," 1989 brought "Early Summer Madness," "Midsummer Night's Dream," and "Back to the Future." They advertised huge sound systems, fairground rides, foreign DJs, and other attractions. Many articles were written sensationalizing these parties and the results of them, focusing especially on the drug use and out-of-control nature that the media perceived.[30]

Once the term acid house became more widely used, participants at acid house-themed events in the UK and Ibiza made the psychedelic drug connotations a reality by using club drugs such as ecstasy and LSD.[29][31][32] The association of acid house, MDMA, and smiley faces was observed in New York City by late 1988.[33] This coincided with an increasing level of scrutiny and sensationalism in the mainstream press,[34] although conflicting accounts about the degree of connection between acid house music and drugs continued to surface.[35]

Acid house was also popular in Manchester. The Thunderdome (which was generally advertised as a Techno night) in Miles Platting was at the epicenter of the scene and gave rise to acts like 808 State, Jam MC's, Steve Williams and Jay Wearden. The genre was extremely popular with the city's football hooligans. According to Manchester United football hooligan Colin Blaney in Hotshot: The Story of a Little Red Devil, the acid house venues were the only place where rival hooligan gangs would mix without coming to blows with one another.[36]

In the late 1980s and early 1990s, news media and tabloids devoted an increasing amount of coverage to the hedonistic acid house/rave scene, focusing on its association with psychedelic drugs and club drugs. The sensationalist nature of the coverage may have contributed to the banning of acid house during its heyday from radio, television, and retail outlets in the United Kingdom. The moral panic of the press began in 1988, when the UK tabloid The Sun, which only weeks earlier had promoted acid house as "cool and groovy" while running an offer on acid smiley face t-shirts, abruptly turned on the scene. On October 19, the tabloid ran with the headline "Evils of Ecstasy," linking the acid house scene with the newly popular and relatively unknown drug. The resultant panic incited by the tabloids eventually led to a crackdown on clubs and venues that played acid house and had a profound negative impact on the scene.[37]

Despite this, one tune broke through into the mainstream in November 1988. Stakker Humanoid, produced by Brian Dougans (later of Future Sound of London), was a hit not just at influential clubs like Shoom in London, but was championed by mainstream stalwarts like Radio DJ Bruno Brookes and Kylie and Jason producer Pete Waterman. It went on to reach number 17 in the UK charts in November 1988, leading to Dougans' appearance on Top of the Pops on 1 December 1988.[38]

In the 21st century, reports surfaced about a 1982 album that sounds similar to what would later be called acid house. The album, Synthesizing: Ten Ragas to a Disco Beat, is by Charanjit Singh, a Bollywood session musician from Bombay, and features Indian ragas fused with disco.[39][40] The album was recorded using the same basic Roland equipment often used for the later acid house music: the TR-808 and particularly the TB-303, which Singh was one of the first musicians to utilize.[40] The record was initially a commercial failure in India and eventually forgotten, but its re-discovery in 2002 and eventual re-release in early 2010 has prompted comparisons to acid house music, with a few writers even considering it to be the first example of an acid house record.[39][40][41]

In 2015, former Red Hot Chili Peppers guitarist John Frusciante released an EP and LP in the acid house genre under the alias Trickfinger.