Acireale [ˌatʃireˈaːle] (Sicilian: Jaciriali; locally shortened to Jaci or Aci) is a coastal city and commune in the north-east of the province of Catania, Sicily, Italy, at the foot of Mount Etna, on the coast facing the Ionian Sea. It is a diocese, famous for its churches, including the Neo-Gothic St. Peter's Basilica, St. Sebastian's Basilica in the Sicilian Baroque style, and the 17th century Acireale Cathedral, and a seminary, for the training of priests. Acireale is also noted for its art and paintings: the oldest academy in Sicily, the "Accademia dei Dafnici e degli Zelanti", is located here. 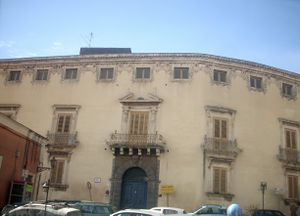 According to tradition, the city's origins trace back to Xiphonia, a mysterious Greek city now completely disappeared. In Roman times, there existed another Greek town, Akis, which was involved in the Punic Wars. In Ovid's Metamorphoses, there is a great love between Acis, the spirit of the Acis River, and Galatea the sea-nymph. According to mythology, the tears of Galatea after the death of Acis gave birth to the Acis River, Fiume di Jaci, flowing past Acireale (the ancient Akis or Acium).[1]

In the Middle Ages, the town expanded around the castle (now part of Aci Castello), known as Jachium under the Byzantines, as Al-Yāj (الياج) under the Arabs, and, later, as Aquilia. In 1169, a huge earthquake scattered the population of the mainland, divided between the numerous boroughs of Aci. Another Aquilia was founded in the late 14th century further north, creating the nucleus of the modern city. The only remains of the medieval Aquilia Nova ("New Aquilia") is the Gothic-Lombard-styled portal of the cathedral. 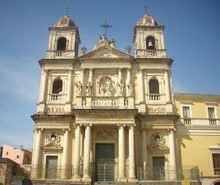 Church of Saint Dominic, Piazza San Domenico. This neoclassical style church was rebuilt in the 18th century after the original 16th-century structure sustained considerable damage caused by the 1693 Sicily earthquake

In the 16th century, Emperor Charles V freed the city from feudal ties, creating it as a Crown commune. In the late 16th century, the town had between 6,000 and 7,000 inhabitants. The most ancient document mentioning the Carnival of Acireale dates to 1594. The town expanded its role as a trade center (it was granted the right to hold a Free Market or Fiera Franca) and received numerous new edifices.

Acireale was nearly destroyed by an earthquake in 1693, which substantially halted its economic growth. During the Expedition of the Thousand (1861), which freed Sicily from the Kingdom of Naples, Acireale was the first town to rebel against the Bourbons. In 1941, it was bombed by the Allies, resulting in many civilian casualties.[citation needed]

The church of San Biagio in Acireale contains some of the relics of the Venerable Gabriele Allegra, who had entered the Franciscan seminary in 1918.

Villa Belvedere and Parco delle Terme, two large public parks and "La Timpa", a beautiful natural reserve overlooking the Ionian Sea, offer great nature sights. Piazza Duomo, with its St. Peter's Basilica, is in the main square of the city. There are many beautiful historic Baroque buildings in town, such as Palazzo Pennisi and Palazzo Modò, which date from the 17th century, and Palazzo Musmeci dating from the 18th century. The commercial city center is primarily located in the streets including and adjacent to Corso Umberto and Corso Italia, which are the city's principal thoroughfares.

The Fortezza del Tocco, a 16th century fort, has been converted to a nature reserve. 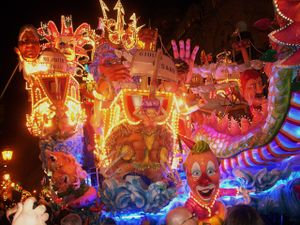 Acireale is famous for its spectacular floats during the carnival season

Acireale is famous throughout Sicily for its spectacular floats, costumes, and parades during the carnival season, which attracts many visitors.

Acireale is twinned with: